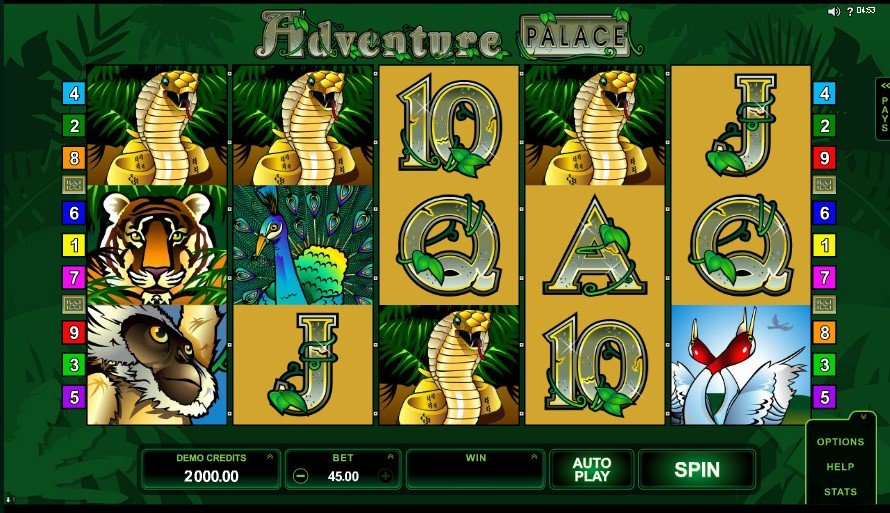 Jungle pokies catch on with the gambling audience as they let people delve into the exotic ambience and get away from the everyday hustle and bustle. Adventure Palace from Microgaming is set against a brightly colored lush Asian jungle that is abundant with wildlife and hides the untold riches under the trees. Join in the fantastic trip, stroll around the jungles and claim your share of the treasures that five wild elephants would bring to you. This pokie is pretty basic in features but the 150,000-coin prize is a great encouragement for you to keep spinning and try to win the immense jackpot prize.

The gaming action takes place on 5 reels and 9 selectable paylines. As is the case in most 5-reel games, symbols pay from left to right, except for scatters. You can make use of an AutoPlay feature and select how many times the reels should spin automatically without your having to click the Spin button.

The symbols used in the pokie will really make you feel in the midst of the remote woodlands because even the low-paying card pictures (from 9 to A) are stylized as big time-worn stone figures enlaced with ivy. Hitting a winning combination of these stone blocks awards x2 to x125. Animal pictures are more lucrative as they generate decent wins if three to five of them occur on a payline. Cobras or cranes pay the maximum of x250 for five of the same, peacocks pay x400; and monkeys and tigers award x750. A good thing about monkeys and tigers is that they create a combination when two of a kind land on a payline, though they produce comparatively small winnings (x2 and x3) that are even lower than a total bet per spin.

A stake can range between $0.09 and $45 so the game is rather for low-rollers than for the players who like big stakes. The number of active lines is an adjustable value and you can choose to enable 1 to 9 of them, though it is strongly recommended to have all lines in play, unless you want to lose an expensive combination that may fall on an inactive line. A coin size is regulated between $0.01 and $1, with up to 5 coins per line.

An elephant is a wild symbol that acts as a substitution for other symbols helping them complete winning combos. When an elephant appears on a payline in addition to other matching symbols on the same line, it serves as a missing symbol that is needed for a combination. Furthermore, the value of any combination where a wild substitutes increases by x2. Along with that, wilds are able to create their own combos when 2 to 5 occur on an active line. Five of them pay out x10,000 a line bet, or $50,000, which is the highest possible cash prize in the pokie.

A golden-domed palace hidden behind tree leaves is a scatter symbol. It differs from regular symbol in that it pays out regardless of its position on the reels. Once two or more scatters stop in any place (not necessarily on a payline), you get a prize of up to x4500 a line bet ($22,500 at max).

Three, four or five scatters collected on the screen trigger 15 free spins with all wins multiplied by x3. Free spins can be re-triggered during the feature under the same conditions, and the 15 extra spins will be added to the remaining ones.

As many other Microgaming pokies, Adventure Palace has an optional gamble feature. After a winning round, you may continue spinning the reels or click the Gamble button and try to increase your winnings in the latest game. You’ll be offered to guess a face-down card color or suit. Choosing a correct color doubles the amount you have wagered and picking a correct suit quadruples it.