Emperor of the Sea POKIE 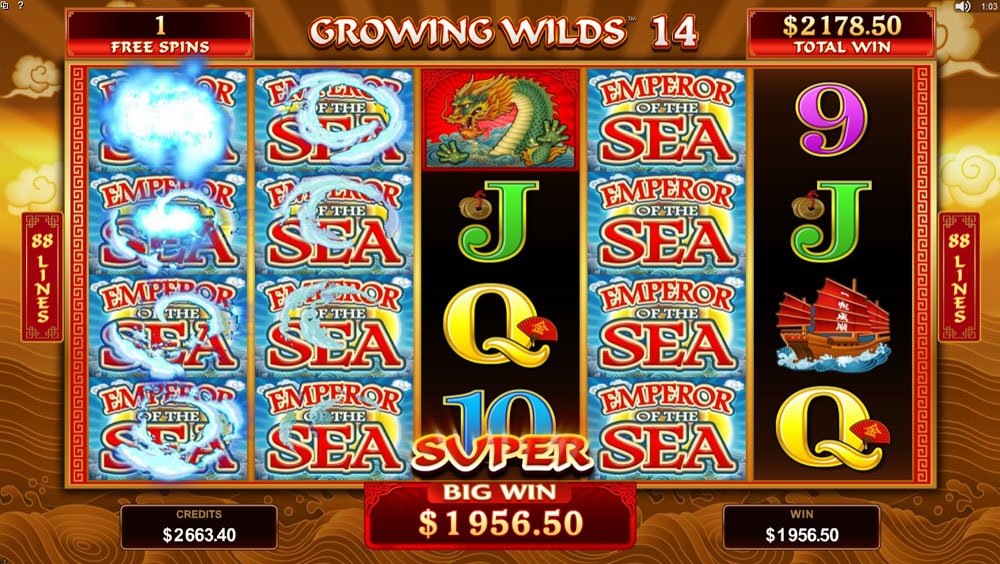 Emperor of the Sea Pokie Review

The theme of this pokie revolves around the Japanese culture and number 8, which is considered to bring luck as it is pronounced in nearly the same way as the Japanese word “prosperity”. There are lots of references to that number in the pokie: 8 free spins, 88 paylines, a $88 award for hitting three golden cups, and etc. Along with that, the pokie has a few interesting features such as stacked wilds and growing wilds that will contribute greatly to big wins. Unique Rolling Reels, which is Microgaming’s signature feature, will bring you a carousel of winning combinations and make you want to play the pokie again and again.

The game is played over the field of 20 symbols arranged in a 5×4 grid. Surprisingly, the pokie has an unusual number of 88 paylines which is a quite uncommon occurrence among 5-reel pokies of today. Symbols used in the pokie are standard poker card values from 9 to Ace and a pack of themed icons such as a Japanese wooden ship, a pair of koi fish, a turtle resting on golden coins, an emerald pot full of golden coins and a green dragon. The top three awards in the pokie are $4400 (five scatters), $3300 (four scatters) and $262.50 (five wilds). As you can see, the prizes are more than modest, with the max prize being as low as x100 times a total bet. Nevertheless, the winnings in Emperor of the Sea are programmed to happen very often but the payouts tend to be on the smaller side.

The pokie logo is also a wild symbol that substitutes for regular icons and helps them form combinations. A great thing about wilds is that they come stacked in all gaming modes, both in base play and free spins. Thanks to stacked wilds, you will often see winning combos generated on almost every spin, especially where a group of wilds lands on the first or second reels. Two to five wilds create their own combos, regardless of other symbols, and pay up to x525 a line bet.

A beautiful golden cup scatter triggers 8 free spins when 3+ appear anywhere in view. You always get the same number of bonus spins, no matter the number of triggering scatters. Actually, this is not a big amount but you get some supplementary features that would make your free spin round very profitable.

If you have ever played Microgaming pokies, especially some of the latest ones, you would recall their branded Rolling Reels feature that is also used in this reviewed game. It works as follows: whenever a winning combination completes, the involved symbols disappear and new symbols slide onto vacant spaces with the chance to create new winning combos with the existing symbols so you can get multiple consecutive wins within a single spin. The max potential prize that the pokie is able to generate during free spins reaches an astonishing 1.650.000 coins!

This is another beneficial feature that is active in free spins only. In a normal mode, a wild stack consists of up to 4 symbols. This means that the stack would cover a reel fully or might cover just a top or bottom portion of the reels. As for Growing Wilds, the wild stacks grow by one with every spin and as you are approaching the end of a free spin feature, stacked wilds become really long, bringing you potentially big wins with life-changing amounts.