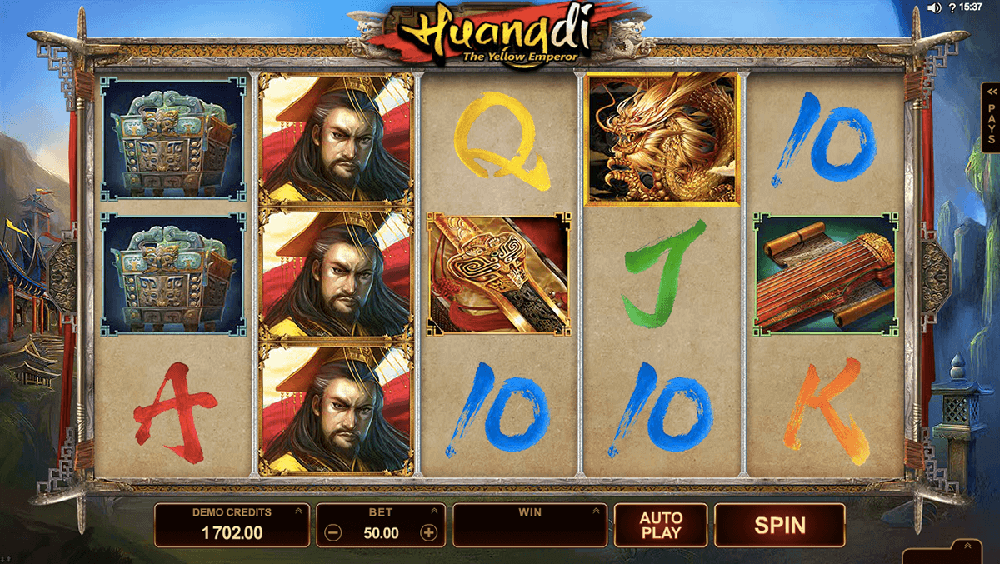 This is a Microgaming’s five-reel pokie played over 25 fixed lines and having a Chinese theme. Inspired by the Yellow Emperor who was a legendary ruler and one of originators of the Chinese civilization, Microgaming has designed a very entertaining pokie with a strong Oriental touch manifested in the unique calligraphy of some symbols. The game offers lots of expanding symbols and a free spin feature where wild symbols also expand bringing great wins. Give it a try and grab the chance of winning a stunning $12,500 jackpot if your luck is up for it.

Huangdi The Yellow Emperor is based on a traditional 5×3 layout and has a set of card symbols typical for most pokies that run on the Quickspin platform. The reels are beautifully set against a mountainous landscape and poor Chinese village nestled among the mountains. Most symbols relate to the heroic emperor who lived in a time of warfare so on the reels you will come across Huangdi himself, a heavy sword, a large decorated chest and a musical instrument. All of the mentioned pay higher than playing card icons, with the highest prize being $1000 at max. Five playing cards (10, J, Q, K and A) are traditionally less valuable but they create combinations more often than the themed pictures. Anyway, get three, four or five of the same pictures and your prize will be x3 to x60 depending on the type of combination. If you are tired of clicking Spin after each round, set up Autoplay to have the pokie spin the reels automatically.

There are two options that can be changed to increase or decrease a bet size: a coin denomination ($0.01 to $0.50) and the number of coins per line (1–10). Modifying these values, you can make a bet between $0.25 and $125 per round. It is obvious that the pokie is designed to fit all budgets and it also appeals to smaller wallets.

All high symbols are arranged in stacks meaning two or three of the same images can appear on top of each other on a reel. Huangdi forms stacks on any reel, while other high symbols are stacked only on reel 1. If any symbol covers the first reel completely, the same symbols on the remaining reels will be expanded too. Every time this feature comes into play, the chance of getting a winning combination increases dramatically.

The pokie logo is a classic wild symbol. It gets involved in winning combinations of other symbols save for scatters by substituting them. Three or more wilds collected in a proper position award up to $1250. Along with its being a classic substitute, the wild has an extra ability that activates during free spins (read below for more details).

Golden dragons are scatter symbols meaning they count towards a winning combination when in any position. Five of them pay the pokie’s largest prize of $12,500, while two scatters would return your total bet. Besides, 3+ dragons launch a free spin bonus with 15 free spins that can be retriggered from within themselves. Once free spins begin, you will see the wild coming in groups of three symbols on the first reel. If you manage to land the whole column of wilds on reel 1, these symbols on the remainder of the reels (if any) will expand too, with the probability of having all the five reels covered with the same wild logo.