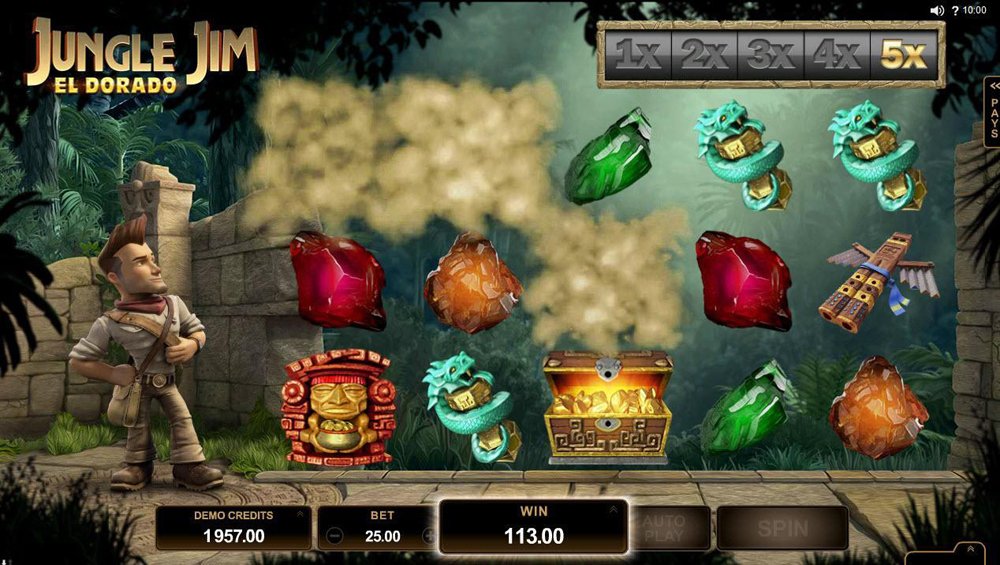 Jungle Jim is an adventurous five-reel video pokie that was released in 2016 and has 3D effects, stunning graphics and highly realistic symbols. In this pokie Jim is exploring South American rainforest in search of El Dorado treasures that span for centuries. Feature-wise, the pokie has lots of interesting bonuses to offer including Microgaming’s signature feature known as Rolling Reels, a multiplier trail up to x15 and a free spin round. Set forth on your adventure with Jim, track down the legendary city and find heaps of gold and emeralds.

This is one of the most elaborate pokies from Microgaming with regard to visuals and you can be sure to feast your eyes on it. The fifteen symbols arranged in a 5×3 grid seem to be up in the air, against the jungle backstage picture. Jim, the main character of the pokie, always stands to the left and is animated throughout the game; sometimes, he drinks water from his flask, slaps a mosquito that lands on his face, gives you a thumbs up when a big win comes, and makes other actions, getting you in the right mood for this pokie. Unlike many other pokies with spinning reels, the symbols in this pokie simply fall down into position in an avalanche-like manner.

The game has 25 fixed lines, with the minimum and maximum stakes being $0.25 and $25, respectively. You will come across different symbols that are themed around the Aztec civilization and treasures, such as raw gems of different colors, totem poles and chests with gold. Orange, red, green and blue gems are low-paying symbols with the maximum prize of x100 for five red gems. The max award in the pokie is $3000 (five Chests) but the top prize that you can potentially win exceeds $90,000.

This feature that allows for having a few consecutive wins within one paid spin is sometimes used by Microgaming and some other developers like NetEnt and Betsoft. When a winning combinations is completed, the contributing symbols disappear and the existing symbols above them fall down, thus making some gaps at the top that are instantly filled in by new symbols falling from above.

A wild in Jungle Jim El Dorado is a common symbol with the only one function: it substitute for other symbols save scatters. It has neither multiplying power, nor ability to complete combinations by itself.

An Aztec calendar consisting of two circles is a scatter that creates combinations when three or more land on reels 1, 2 or 3; these are the only reels where the symbol appears. Three scatters pay up to $125 initiate 10 free spins that can be retriggered. Free spins have an enhanced multiplier trail that works the same as the base game but has an increased step between multipliers. Instead of a x1 increase used in the base game, each subsequent win in free spins increments the preceding value by x3, i.e., x3, x6, x9, x12 and 15.

This visually impressive pokie boasts of high attention to detail. Thanks to the outstanding Rolling Reels and Multiplier Trail features, you can expect the pokie to unleash huge prizes, especially during free spins. This low-volatility game offers hours of fun and will appeal to the players who want to try something different, instead of usually formatted 5×3 pokies.