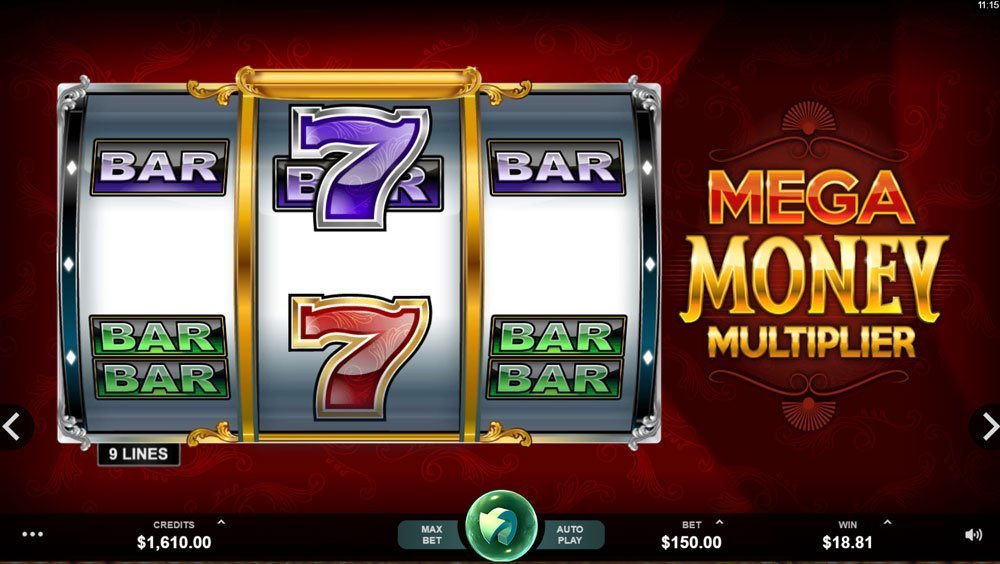 This is a perfect mix of retro authenticity and some modern features that many five-reel pokie fans got accustomed to. Looking at the classic symbols of the pokie, it is hard to believe Microgaming released the pokie in 2017. High-definition graphics, full mobile compatibility and a host of multipliers make it an extremely alluring offer indeed. It is not too much to say that very few non-progressive pokies feature a $100,000 jackpot but Mega Money Multiplier does – three 5x symbols is all you need to change your fortunes forever. Low-rollers will like the fact that the minimum bet is $0.15 although players who bet bigger can put up to $150 on a round.

Just a quick glance at the pokie is enough to assume this is a classic game with all typical features that classic games normally have: bars, sevens and, importantly, three reels. But on closer inspection, the game turns out to have the features that are not common for one-armed bandits. They are:

Let’s take a closer look at each of the above points. The pokie has nine paylines that run in horizontal, diagonal and zigzag patterns. They are not marked with respective numbers to the left and/or right of the reels but are visualized in the pokie’s paytable. There’s no possibility to change the number of paylines.

Most symbols in the pokie are of a classic nature including single, double and triple bars, red sevens and blue sevens. In addition to regular symbols, the pokie has four wild multiplier symbols: 2x, 3x, 4x and 5x – they are of different sizes and colors for easier differentiation. Bars and sevens are very flexible in how they produce winning combination; to get an award, you have to collect three matching or any three classic symbols. Three single, double and triple bars pay off 5, 15 and 25 coins, respectively, while getting any mix of them awards 3 coins.

The pokie has two options: a coin denomination ($0.01 to $1) and the number of coins (1 to 10). Regardless of the fact the pokie has 9 lines, the minimum bet is $0.15. So by placing, let’s say, ten one-cent coins per spin you actually bet $1.5 – that is strange mathematics for a pokie, isn’t it? Anyway, to avoid confusion, consult the paytable that indicates all winning amounts in clear figures (in credits or coins).

Normal, non-feature symbols pay the maximum of $400 at the maximum bet – this prize is granted for landing three 7s. Symbols depicting wild multipliers are the most beneficial ones: three 2x symbols pay up to $25,000, a 2x–3x–2x combo pays $35,000, while the dizzying jackpot amount of $100,000 will be all yours once you hit 2x–5x–2x along a payline.

Wild multipliers are special symbols that can increase a combination value by x2 to x5. If you get two wild multipliers plus one non-feature symbol, both multipliers apply. You land, for example, x4–x5–Red Seven at a $150 bet. A normal value of three red 7s is $400. By applying both multipliers, the award will be 4x5x400=$8000. The only limitation to these feature symbols is they appear only on the central reel except for the 2x symbol that can land in any place.

Two multipliers on the central reel activate a respin. First, you get a payout for the combinations that have been completed and then the respin follows. During the respin, reel 2 stays motionless while the side reels spin one time. After they come to a stop, you are paid out for any new combo formed as a result of the respin.