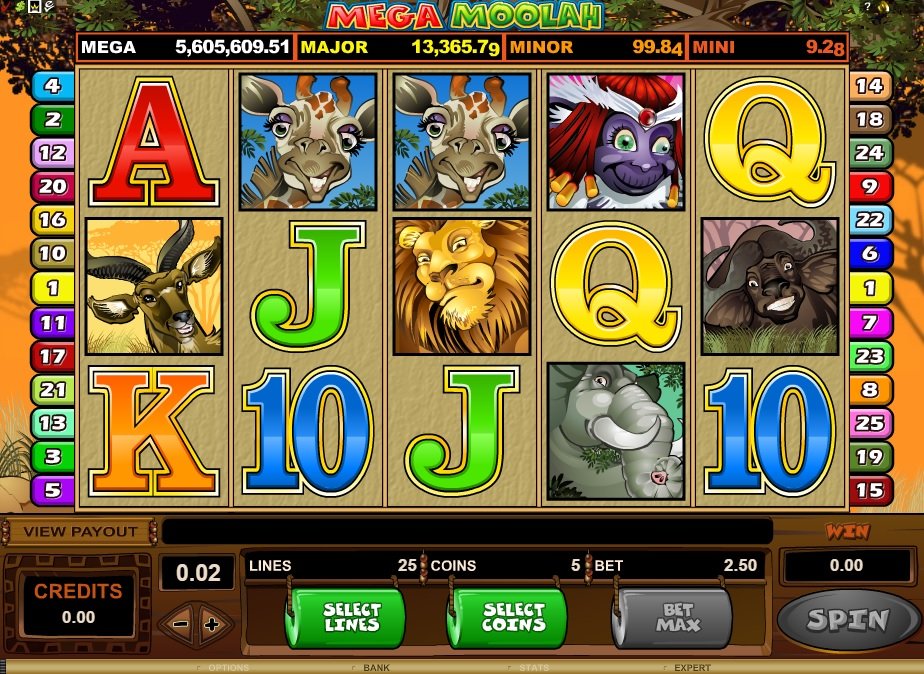 Play for real and get $2500 at Cafe Casino Casino!

Pooled progressive jackpots are accumulated across a wide array of online casinos around the globe. A small percentage of real-money stakes put into play is used to fuel the jackpot, which therefore grows every second. Mega Moolah is arguably the most popular progressive pokie that made 45+ lucky gamblers an instant millionaire since it was released in 2006. What’s more, the game has four progressive jackpots, the two smaller of which are hit dozens of times a day. This Microgaming’s pokie provides an overwhelming experience and can change your life forever in a single spin. How you can win at Mega Moolah? One of the biggest advantages of the pokie is the absence of a “qualifying bet”. This means that betting even the minimum bet makes you eligible for a jackpot.

Mega Moolah has 5 reels, 25 paylines and a safari theme. Apart from being a progressive pokie, it has a set of basic features like any regular non-progressive game including a wild symbol, scatter and free spins. Focused mainly on low-rollers, the pokie allows for betting $0.25 to $6.25 per spin, with all lines enabled. Though you can select fewer lines and bet less than $0.25, you’d better not do it, unless you want to miss a huge jackpot. If you enter the game as a guest user, a message pops up that says that the game can only be played by real users, i.e. for real money. Guest users can still look into the paytable but control buttons will not be clickable.

Symbols in the pokie are based on the safari and animal theme. On the reels, you will come across giraffes, zebras, lions, elephants and other animals as well as five playing card symbols from ten to ace. Low-paying icons award x2 to x150, while the largest non-progressive win that normal symbols can produce is x750, awarded if you get five elephants on an active payline.

A lion is a wild that substitutes and doubles payouts when substituting. Besides, the wild is able to complete combos independently and getting five of them pays off x15,000 or $3750.

A monkey triggers 15 free spins when 3+ appear scattered in any position. During free spins, all wins get tripled. Furthermore, five scatters pay out x100 times a total bet ($625 at max).

A bonus round where you can win any of the four jackpots is activated randomly at any time in the base game. Absolutely any player qualifies for a jackpot but the probability of having the bonus game triggered increases with a bet size. If you play at the minimum stake, the chances are smaller but raising the stake to its maximum also improves your chance.

The pokie contains four progressives and their current values are indicated on four relevant tickers above the reels. They are known as Mega, Major, Minor and Mini. The bonus game where the four jackpots are up for grabs is activated randomly and is played on the second screen. You will see a wheel of fortune divided into 20 sections, each marked with a color indicating a corresponding jackpot: red for Mini (10 sections), orange for Minor (6), yellow for Major (3) and white for Mega (1). The wheel begins spinning and wherever the arrow stops then you win that progressive jackpot.

In 2012, the pokie was made compatible with mobile devices. Five years later, a lucky punter won over 8 million euros wagering 6.25 euros on a spin. And this win is the largest online jackpot payout achieved on a mobile device. Every mobile user can strike it rich and even smash the record! The mobile version of Mega Moolah has high-definition graphics and replicates the functionality of its desktop cousin.