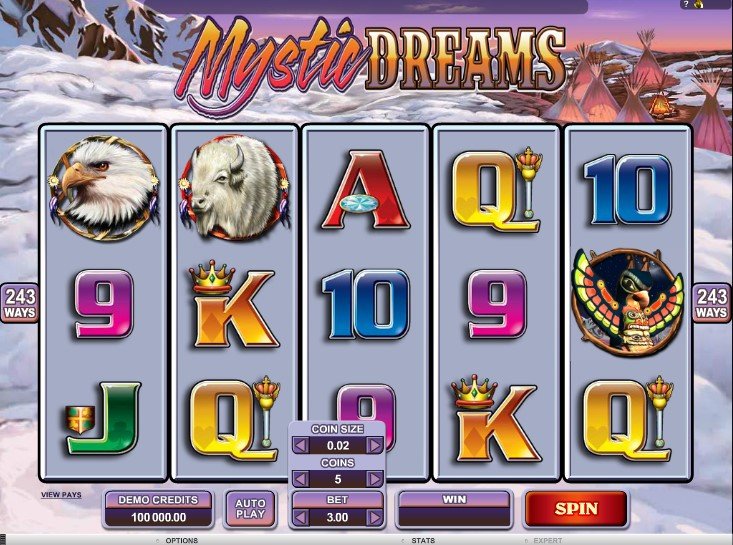 This is a 5-reel pokie with its theme devoted to Alaska Natives. Far, far in the North, in the land of never-melting snows, live over 100 thousand of indigenous people who got accustomed to the challenging climate and hardships. The pokie will make you take a closer look at northern tribes with their unique cultures and beliefs. Try your luck in Mystic Dreams and win up to $72,000 during free spins. The game has wild multipliers that can give a 25-fold increase to your wins. Besides, Microgaming packed in the 243 ways to win model, making the actual game play very rewarding.

Mystic Dreams is based on the Microgaming’s staple Way Wins system whereby identical symbols must align on neighboring, consecutive reels without gaps between the reels and without any requirement as for their vertical position. This gives potentially more chances of triggering a win combination. In terms of graphic design, the pokie has clear and detailed symbols and a full-screen backstage image depicting snow-covered mountains and a pack of cone-shaped tents also known as tipis.

The software developer uses 10 regular symbols in the pokie, including playing card values (9 through Ace) and 4 themed icons that consist of a bald eagle, a wolf, a white buffalo and an Alaska native. The top three prizes that non-feature produce are $1000 (five Wolves), $2000 (five Buffalos) and $2500 (five Natives).

No paylines are available in the pokie, therefore you cannot bet on a single payline but there are still two options that you can change in order to adjust a bet size to your preferences and wagering habits. A bet starts at $0.30. By changing a coin value that come in five denominations ($0.01, $0.02, $0.05, $0.10 and $0.20) and the number of coins, you can raise a total bet size up to $30 per spin.

The max win on a single combination is $2500 as is stated above, and this amount is 83 times higher than a total bet. This is not high as for today’s standards but these modest payouts stem from the fact that the pokie belongs to low-variance games where combos form very often but they are fairly moderate in size. So, to sum up, you should expect to get routinely lots of small- to medium-sized wins with very few dry spins.

A tipi with a bonfire is a wild symbol. In the base game mode, it functions as a traditional substitute for all icons including scatters. This full-fledged substitution power makes the wild a very useful symbol as it can facilitate entry into free spins.

A totem pole is a scatter that triggers 10, 15 or 20 free spins. To unlock the feature, three, four or five scatters need to be collected left to right. During free spins, you will very likely receive big wins thanks to wild multipliers that are active only in the feature, not in the base game.

In a normal gaming mode, wild symbols have no multiplying effect but as you enter free spins, wilds become multipliers and the most appreciated symbols. When a wild appears on the second, third or fourth reel, it will have a multiplier of x2, x3 or x4, respectively. Better yet, these values multiply each other when two or three wilds occur. For example, you get wilds on reels 2 and 4 meaning that a total multiplier would be 2×4=8. The maximum possible multiplier value that can be achieved in this manner equals 2x3x4=x24, so the resulting wins can reach astronomical amounts.