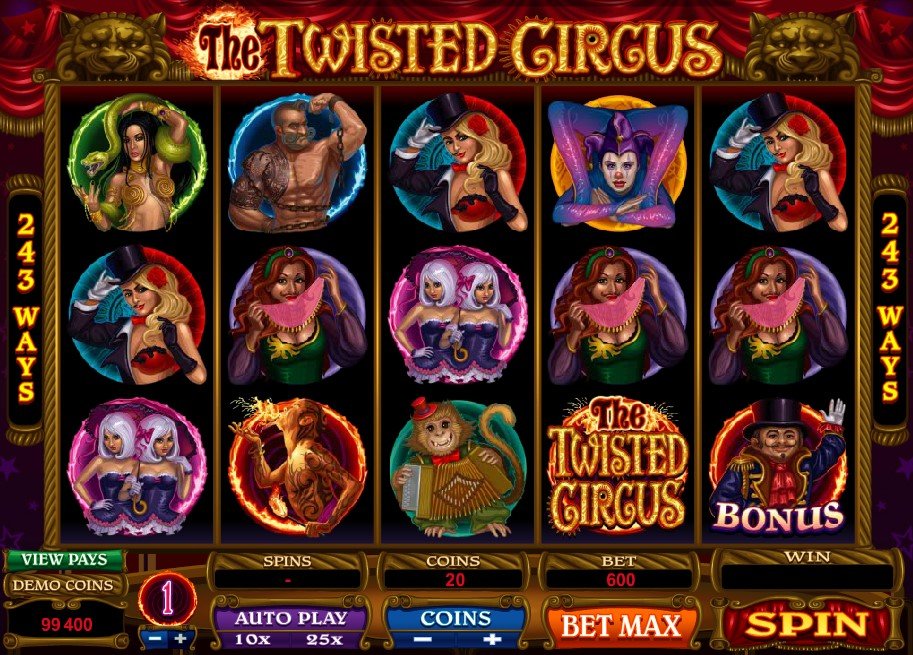 The Twisted Circus is a 5-reel 243 ways-to-win pokie with its theme revolving around weird circus performers who impress and excite the public with their oddities, strength and other incredible skills. The pokie released by Microgaming has highly detailed design, astonishing animations and a generous Circus Match bonus where you can win up to $8400. The Twisted Circus has many surprises in store such as wilds, scatters and an extremely gainful free spin session. Join the visually stunning circus fun and avail of the opportunity of winning $83,200 in free spins.

The reels of this magnificent pokie are set against red draped curtains with bronze lion heads at the top. Symbols have a realistic high-quality design and they emanate the circus vibes in every smallest detail. The reels are populated by the following symbols: monkey playing the accordion, a woman hiding her beard behind a veil, a contortionist in clown makeup bending herself backwards and other icons related showing different circus performers. A fire breather is the most expensive symbol that awards up to $1000 for five of a kind, while other regular symbols pay less in any combination.

The pokie utilizes a popular symbol arrangement model known as 243 Ways to Win. Normal pokies have a certain number of paylines that are virtual patterns running across the five reels, from reel 1 to 5. Matching symbols need to stop exactly on a payline for the pokie to award you a coin prize in accordance with its paytable. In 243 Ways to Win pokies, like the reviewed one, symbols are not required to occupy paylines since there are none. A number of identical icons is considered to have formed a winning combination if the first symbol occurs anywhere on reel 1, the second on reel 2, the third on reel 3, and so on. The relative position of these identical images on the reels is not a significant factor.

The Twisted Circle symbol aflame is a wild that acts as a replacement for regular symbols. It has another two benefits that will help you get more winnings:

A ticket is a scatter that pays out the largest jackpot of $12,000 if five appear in any position. Hitting two to four scatters, you will earn x1, x2 or x10 times a total bet. Besides, 3+ tickets initiate 13 free spins, during which all wins are multiplied by x3.

Three or more Ringmaster symbols activate a captivating bonus played on the second screen. You will see a 4×4 grid consisting of blue circles. Your task is to pick the circles which then reveal any of the five symbols: Siamese Twins, Strong Man, Snake Lady and Fire Breather. In addition to these, there are several wild symbols hidden behind the circles. Each performer revealed as a result of your choice adds to the counter to the right of the grid. You keep picking until three of the same symbols are collected. Any wild symbol that you find results in multiple matches and adds to each symbol in the counter. Awards for each of the performers are also displayed on the right side. The maximum potential prize up for grabs is $8400.