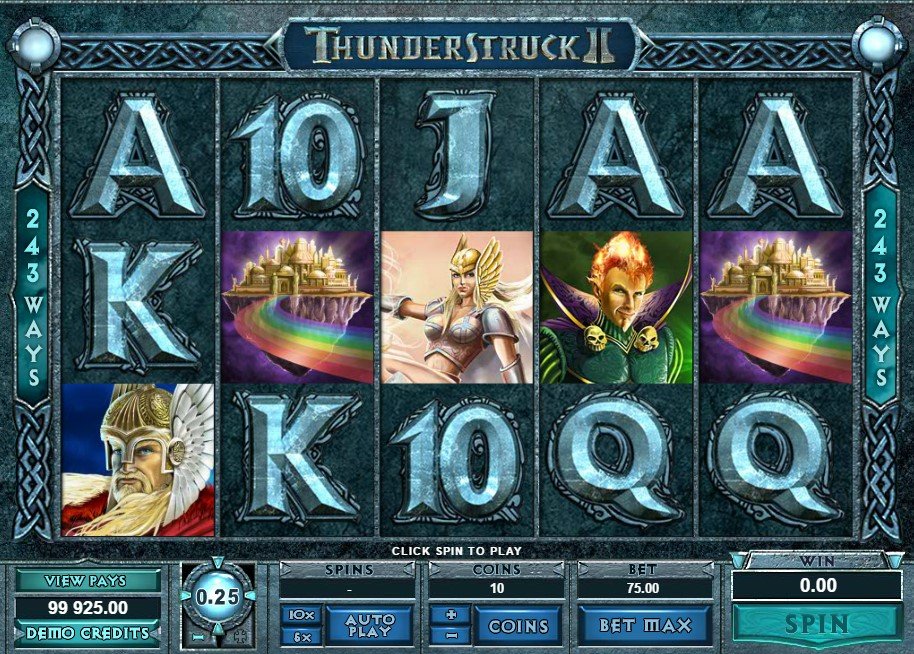 Thunderstruck, the first part of the series, became a hit among gamblers across the globe, so it was reasonable that Microgaming designed and released a sequel reviewed below. The new pokie is a fully revamped edition of its predecessor that has only one common feature – Norse mythology and Thor. In all other aspects, the two games are as far apart as the poles. Thunderstruck II has a plethora of fantastic bonuses and a tantalizing Great Hall of Spins that provides tons of free spins with exciting extra features. The pokie will appeal to by far the majority of gamblers beyond a shadow of doubt.

Today’s gamblers spoilt for choice and thousands of pokies available in online casinos, may perceive the reviewed game being somewhat simple, especially in what relates to graphics. Well, it’s true that its visual style lags behind many latest releases by Microgaming and other industry leaders. But the moment you open the paytable and get acquainted with it will become the wow moment for you. The pokie is really abundant with engaging features that will definitely make your day.

Thunderstorm II has a 5×3 configuration and is based on a familiar 243 ways to win system. You will recall that the pokies where this system is used have no classic paylines. Matching symbols pay out a certain award when they are aligned from the first reel rightwards, without any gaps between the reels. One of the strengths of this layout is a higher frequency of wins but on the negative side, they tend to be smaller than in normal pokies that have paylines.

Symbols in the pokie relate to Norse mythology and culture. You will see the pictures portraying Loki, Thor, Odin, a magnificent Viking ship and other symbols of this kind. Bonus payouts will be reviewed below – but as for regular symbols, the highest possible win that one combination provides is $250. This prize is for hitting five Thor symbols. Right, this “jackpot” is not an ultimate dream but as is said above, winnings here occur very often, though they are small-sized.

A pokie logo is a wild symbol that 1) substitutes for regular pics and 2) pays out up to $500 for five of a kind.

Ancient Scandinavians believed that lightning warded off trolls. In this pokie, there are no trolls but you will sometimes see lightning bolts striking the reels and turning a random number of them into wilds. This is a random feature and can occur at any time – just like thunderbolt when it rains.

Enter the Great Hall of Spins

Now comes the most interesting part of the pokie. Wait till three Bonus symbols appear anywhere in view and celebrate entry into the Great Hall of Spins. The idea of this feature is very simple: the more times you enter the feature on hitting three bonus symbols, the higher you advance through the four levels of the Great Hall.

Imagine this is the first time you play Thunderstruck II, you land three bonus symbols and the feature begins. You enter the Valkyrie Hall and earn 10 free spins with all wins multiplied by x5. After free spins are over, you return to the base game automatically. The same feature will be awarded for the second time you come into the Great Hall, and for the third time… up to five times of your activating the bonus. If you like the pokie so much that you manage to hit 3 bonus symbols for the sixth time during a current session, you then enter the Loki Hall. There you find 15 free spins plus the Wild Magic bonus where regular symbols are transformed into additional wild symbols. The two remaining levels are:

Important: a personal progress is saved automatically when you leave the game, so next time you start with the progress of your previous session.