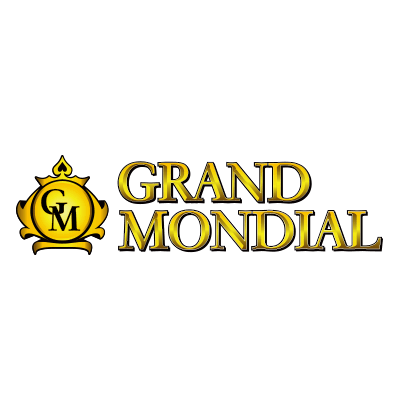 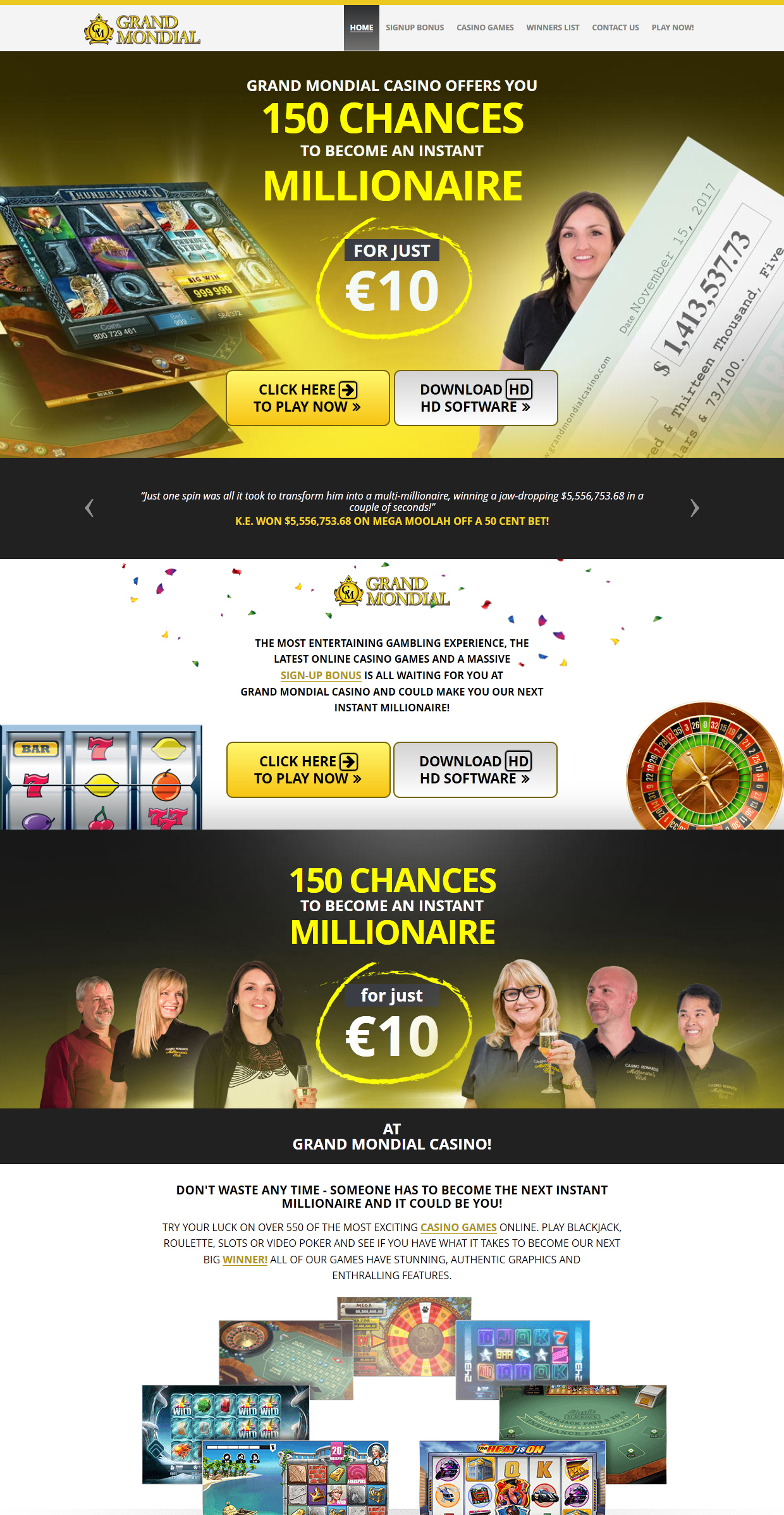 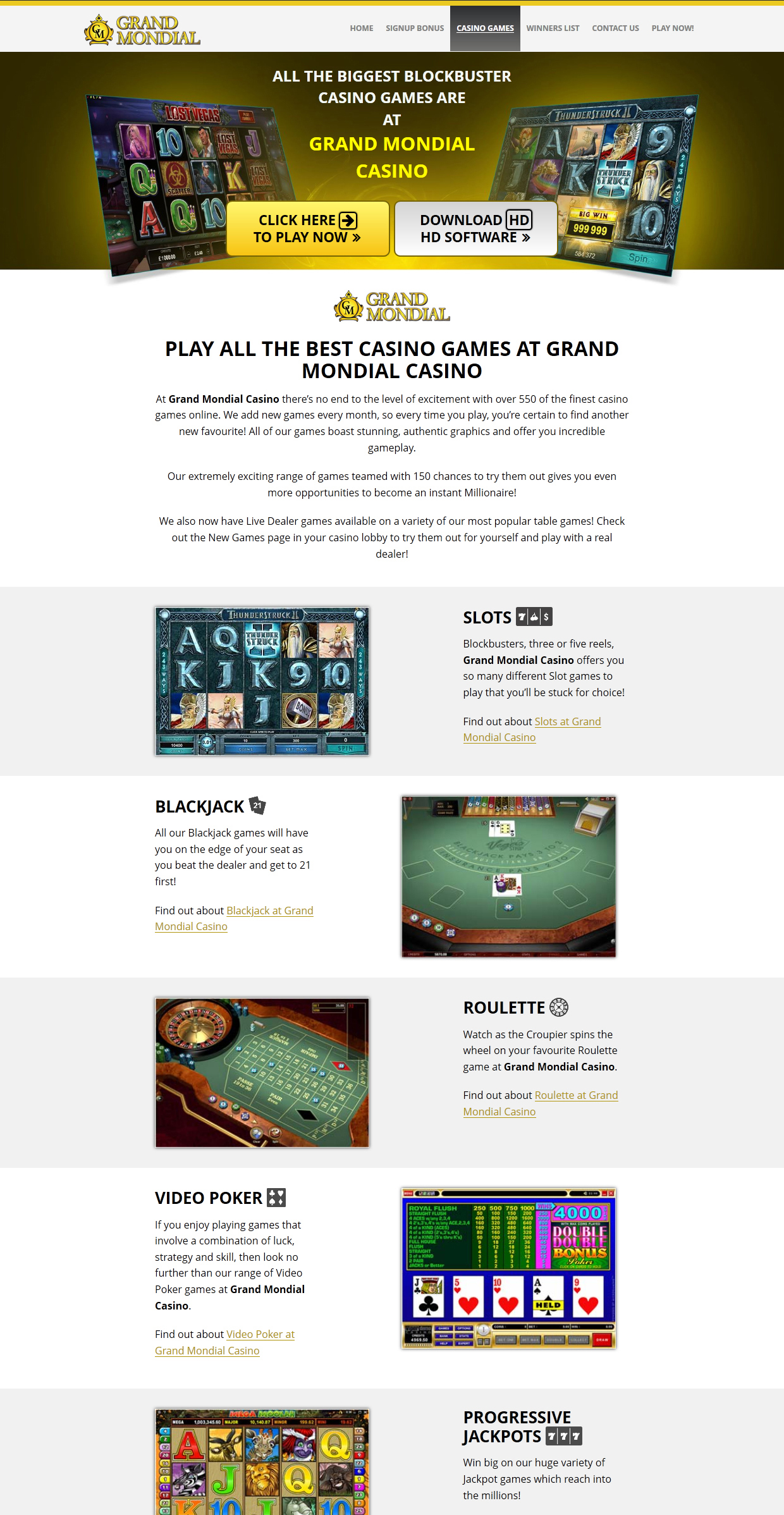 A row of alternating messages on the Grand Mondial homepage shows gee-whizz feedback of Mega Moolah users who won several millions of dollars betting only 50 cents, 1 dollar or even free money. These messages reflect popularity and generosity of one of Microgaming’s progressives available in the online casino. Moreover, this and other awesome pokies could make a New Zealand user the next instant millionaire. In addition to progressives, Grand Mondial presents around 500 regular pokies and table games, all powered by Microgaming. In addition to the glorious game library, the casino has a well-elaborated bonus system that covers both novices and loyal punters.

After signup, a user can choose to download a casino app and visit the casino from that software, or stick to browser access. Whichever the choice, the Microgaming platform has proven to be equally reliable, no matter the gaming mode. Right at the start, every legal NZ user (the one who is of legal age and has made a qualifying deposit) receives 150 chances of winning a progressive (read below to find out more).

Depositing money (AUD, USD and other currency) is easy as players can pick from several methods in the Cashier, including Visa and MasterCard debit cards, Neosurf vouchers, Skrill, Neteller and paysafecard. As of this writing, bitcoins were not accepted. The minimum deposit (this is also a qualifying sum for a welcome bonus) is $10, while the top limit is variable.

Getting money from the casino is easy but a player will have to wait longer until funds arrive, compared to depositing. Besides, one should make sure the withdrawal request contains the amount of no less than $50 (or $300 for direct bank transfer). Methods that can be used for cashing off are Visa and DBT. The casino first places the funds on hold for 48 hours, during which a player may cancel the transaction and return the money back. Maximum limits applicable by Grand Mondial are not set forth in the terms and conditions. But perhaps there are some.

HTML5 pokies show excellent compatibility and performance on mobile devices if a player chooses to log in (or sign up) with Grand Mondial when out and about. Along with a massive catalogue of different pokies, the casino has to offer its huge bonus program, which can be easily claimed and then wagered on a smartphone. As the site is based on the software designed by a leading provider (Microgaming), every usability aspect was thought long and hard. Browser play is the only option that can be exercised to play in the mobile casino.

The casino is driven by Microgaming platform that is enriched with new products about every week. Since its establishment over 20 years ago, this company keeps on maintaining top quality in every aspect related to pokies, namely, high theoretical return to player, eye-catching graphics, innovative bonuses and, importantly, a great entertaining value. The collection in Grand Mondial consists of many pokies which are universally recognized as being generous, interesting and appealing:

There are also many pokies based on 243 or 1024 ways to win, which have 3 or 4 rows of symbols, accordingly. Instead of regular payline patterns, winnings are determined by identical icons that appear on adjacent reels, not exactly along specific paylines. This reel scheme was allegedly developed by Microgaming many years ago and is now utilized by every pokie maker on the market. Examples of this kind of pokies include Thunderstruck II, Avalon II, Jurassic Park and Robo Jack.

Generally, pokies in Grand Mondial are full of different features, from Stacked Wilds to pick-them-all mini games or multi-level bonuses. Bet sizes are conservative and are focused on every legal New Zealand player who has signed up at the online casino.

There are a few progressive pokies in Grand Mondial, all delivered by Microgaming. The most famous games of this type are certainly Mega Moolah (a series of jackpot games), King Cashalot and Major Millions, all of which usually pay out more than a million-worth jackpot per win. On the other end of the spectrum, there is Cash Splash and LotsaLoot that also award progressive jackpots but do this very often, around every few days. Anyway, legal New Zealand gamblers will be satisfied with the assortment of progressive pokies in Grand Mondial.

Players are going to indulge in the incredible assortment of classic games. Their inherent property is a three-reel field with a few paylines (normally, 1–5). All gaming action runs on a single screen and the paytable is normally visible beside the reels, not on a dedicated page. Classic pokies in Grand Mondial usually have a thematic twist, which is manifested in the background picture and some symbols (normally, high-paying ones). For example, Goblin’s Gold has a self-explanatory theme with a goblin’s face being the highest-paying pic (6000 coins for 3 goblins on line 3); Jurassic Jackpot features a dinosaur’s head as the top-paying icon (1600 coins for three of a kind), etc. Actually, the library of one-armed bandits in the online casino deserves the highest credit and appreciation for being so extensive and multi-faceted.

The lobby is full of table games such as Vegas Strip Blackjack, Spanish Blackjack, Atlantic City Blackjack, Premier High Streak Blackjack and around 15 more tables of this enticing game. Roulette is also numerous, with 10 tables in place. In addition to very popular classic European and other major basic (classic) variations, the casino presents an offbeat Multi Wheel Roulette (Gold Series) that has 8 simultaneously rotating European wheels to place a bet on. NZ users wanting to bet on Banker, Player or Tie are offered a handful of baccarat products.

The package for beginners covers the first two deposits. On depositing $10, a player gets 150 free spins to be used in a progressive pokie set by the casino. The cost of each spin is $0.25 (one cent per line), thus the total monetary value of the bonus makes up $37.50. At the completion of FS’s, a player needs to wager the winnings x200 times.