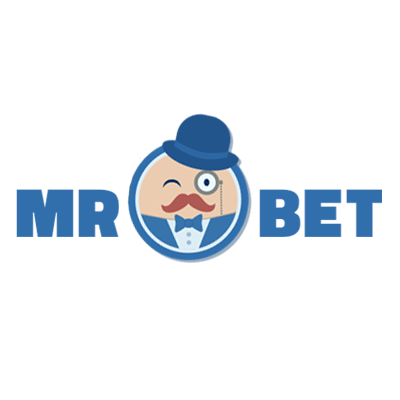 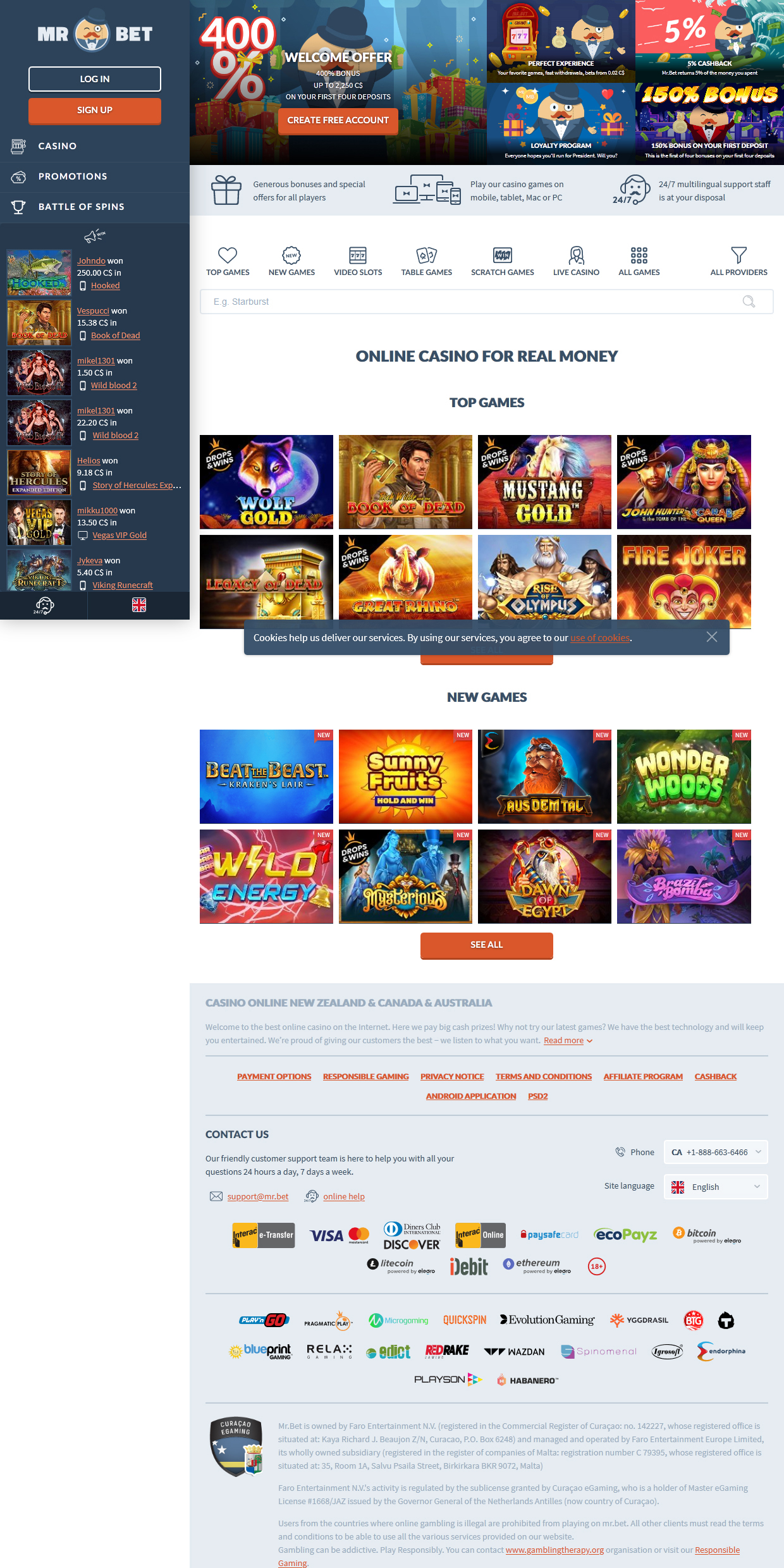 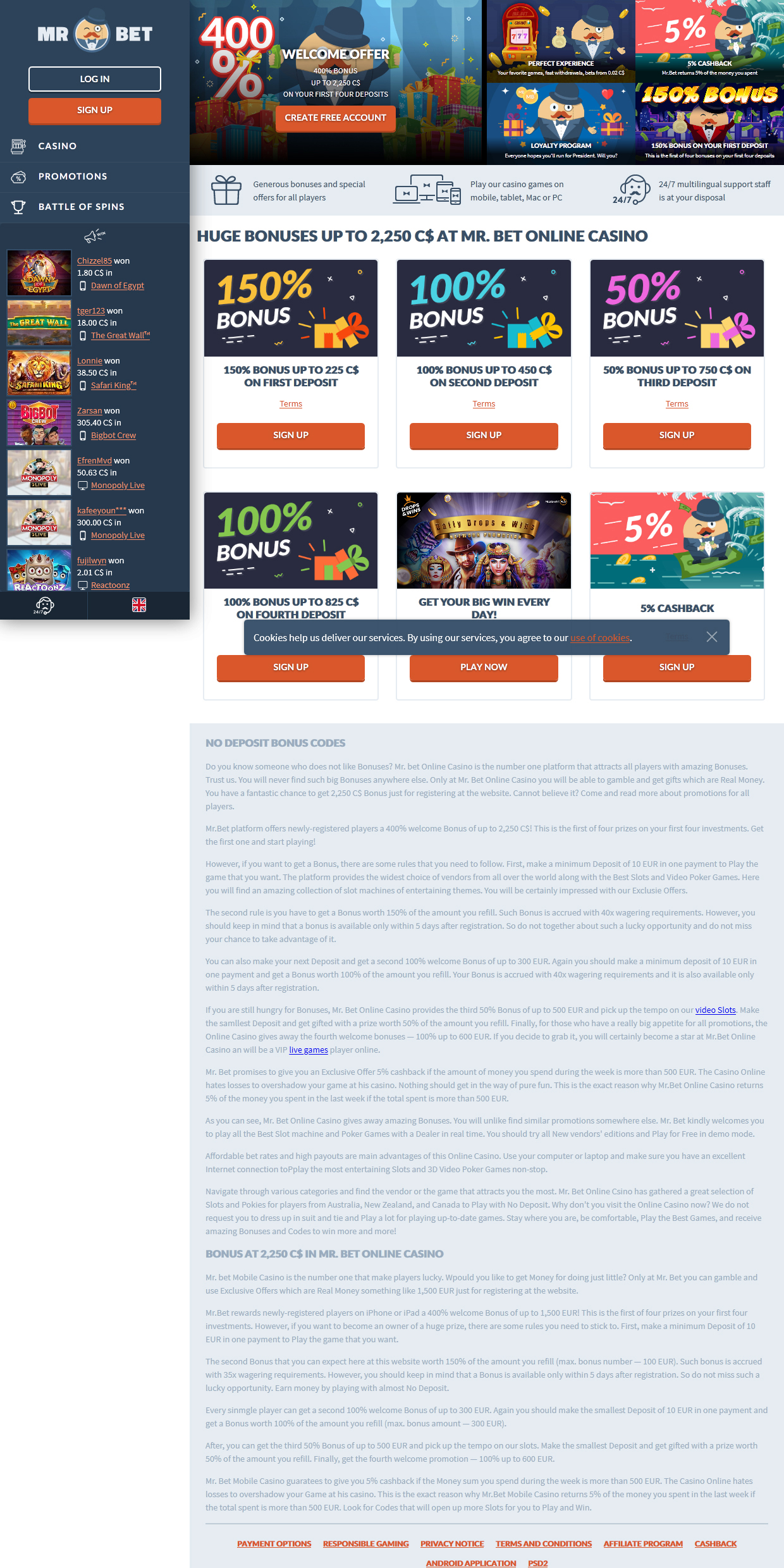 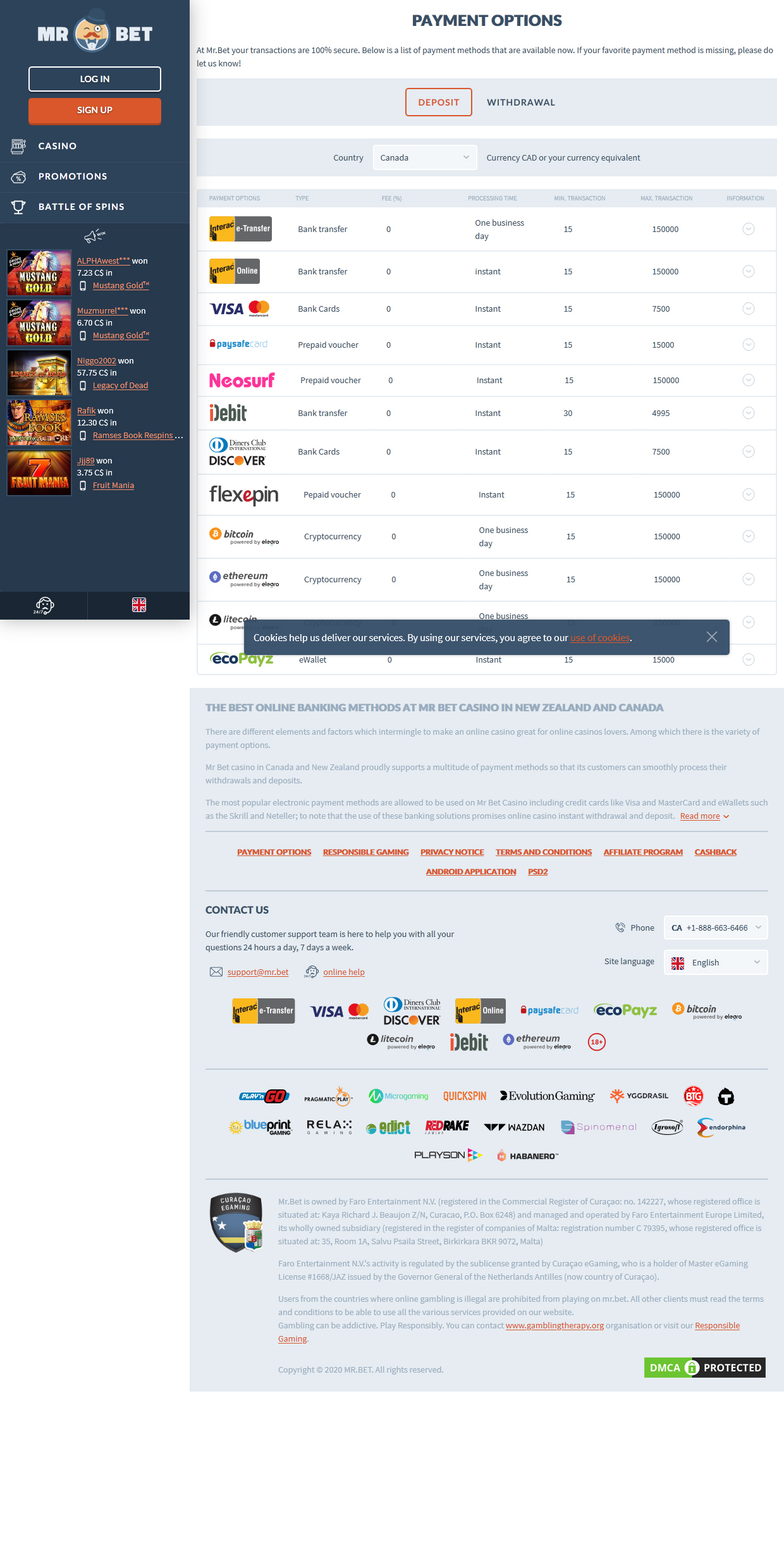 Mr. Bet, a fictional character inhabiting the webpages of the same-name online casino is going to shower every user with generous bonuses, special rewards, cashback and 1000+ pokies from various providers. The casino owns a Curacao gambling license and is thus a legal place that readily accepts players of New Zealand. After creating a free account and placing the first deposit, a player may claim an unstinting welcome package and later reckon on daily reloads with low wagering requirements. Mr. Bet is fully autonomous – everyone can play its games without any additional casino software needed.

The site has an eye-pleasing visual design with white background, many pictures and lots of funny sketchy portraits of Mr. Bet’s mascot. It is at once apparent that the casino has comprehensive content, namely, the game lobby is full of pokies, table games and live dealer products; the bonus department is crammed with offers and the Tournament page shows currently running and upcoming events. Reliability-wise, no issues arise when players attempt to get their winnings withdrawn as everything is easy, transparent and as quick as reasonably possible.

Deposits and withdrawals in Mr. Bet

Most deposits are instant except for cryptocurrencies (bitcoins, litecoins and ethers) that normally arrive within minutes. Along with bitcoins and other crypto, Mr. Bet accepts Visa, MasterCard, Skrill, Neteller and ecoPayz. Before effecting a transaction, a player needs to ensure the deposited amount is equal to or greater than $10, otherwise the casino will not accept it. The max transaction limit differs across methods. Each payment method has detailed explanations enabling one to act correctly when depositing.

Users often place utmost importance on how convenient and fast withdrawal methods are and the reviewed online casino has the edge over its peers in this regard. Players are allowed to request withdrawal via Visa, Neteller, Skrill, Bitcoin, Etherium and Litecoin. Min transaction limits are $20 for fiat money and $100 for digital money (bitcoins, etc.). The ceiling amount is $5000 per week or $15,000 per month. Fees are not applied to cashout transactions by the online casino.

Quality-wise, it makes no difference which device a user enters the casino on as Mr. Bet is perfectly adapted to all screens and mobile software. When surfing the casino via a handheld device, a player has access to all casino departments, in particular, Bonuses, Games, Signup/Login, Customer Care and FAQ. HTML5 games, which are fully and perfectly supported by iOS and Android devices, account for over 800 titles in Mr. Bet. The casino is played in a regular web browser so New Zealand users do not need to install any additional apps to what they already have on their smartphones, in order to visit the online casino.

Most players visit online casinos to plunge into the universe of pokies. Mr. Bet is an ideal playground for New Zealand users who adore pokies as it offers over 1000 top titles from over 25 major and less known providers such as Gamomat, Microgaming, Betsoft, Mr Slotty, Habanero, Endorphina, Wazdan, 1×2 Gaming and many others. With so many providers that power the online casino, players will find their favorite games with only a few clicks.

Being on par with the above company, Microgaming pokies are another point of interest for many legal NZ users. All but dull, the games can be played by low-budget or stingy players as the min bet rarely exceeds one cent per line. Some pokies, like The Phantom of the Opera, Terminator 2 and Halloween, make a player revive memories of their favorite films, while others (Jungle Jim El Dorado, Aztec Temple Treasures) transport one to deep Amazonian rainforest in search of hidden treasures. A Gamble feature available in many Microgaming pokies is what makes them special, let alone numerous Wild-based features, free spin modes and bonus rounds running on the second screen. Microgaming comes up with several world-famed progressive pokies such as Mega Moolah and Major Millions. These and around 100 other pokies from this acclaimed company are presented in the reviewed online casino.

Given a variety of providers in Mr. Bet, highlighting the best games is a real challenge. The point is that many dozen of pokies in the available casino collection are truly great and deserve the highest mark in many aspects. Along with the two providers overviewed previously, iSoftBet is also very good when it comes to video pokies. It has launched a wide range of cutting-edge games, most of which are optimized in HTML5. Living up to the corporate slogan “Simplicity. Creativity. Personality”, iSoftBet produces fairly simplistic yet exceedingly creative pokies that many NZ users love so much. Mr. Bet offers around 150 endlessly engaging pokies of this provider including Basic Instinct, Forest Mania, Paranormal Activity (a branded pokie based on the same-name film), Spooky Family and Dragon Stone.

The universe of online pokies is rich and multi-faceted. Some providers are either taking initial steps on the gambling market or are lesser-known for some other reasons. Legal New Zealand players who want to extend their horizon and explore pokies beyond the traditional scope of games offered in many casinos, should pay heed to some under-reported providers, many of which offer one-of-a-kind solutions. Patagonia games are full of original ideas, completely new approaches, and of course, significant payouts. Top picks are Halloween Groove, Pirates and Super Pachinko. Genii is another software provider that is rarely found in online casinos yet its pokies have tons of enthralling features and colorful graphics. Throne of Gold, Midnight Racer, Santa’s Surprise and other impressive titles from Genii are showcased in Mr. Bet lobby for NZ users.

The catalogue of blackjack, roulette, baccarat and craps (both video and live versions) is truly awesome in Mr. Bet. Whenever a New Zealand gambler visits the online casino to play the game of 21, they will locate there over 20 of classic variations such as Atlantic City, Vegas Single-Deck BJ, Double Exposure 3-Hand BJ and Blackjack Reno. Roulette also comes in three basic variations (European, American, French) that differ in minor settings and table limits. The live dealer department in Mr. Bet comes from several celebrated providers including Ezugi and Evolution, both boasting of high-end software with a large assortment of live tables, some of which allow for betting bitcoins.

Bonuses and promotions in Mr. Bet

The welcome package consists of the following:

Promotions for existent punters are: