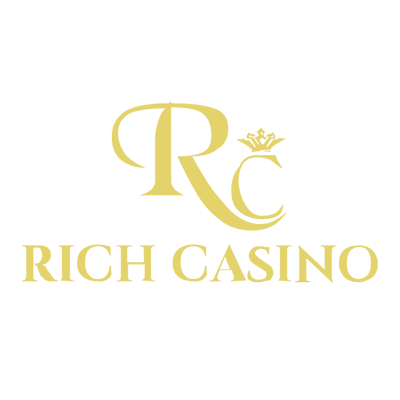 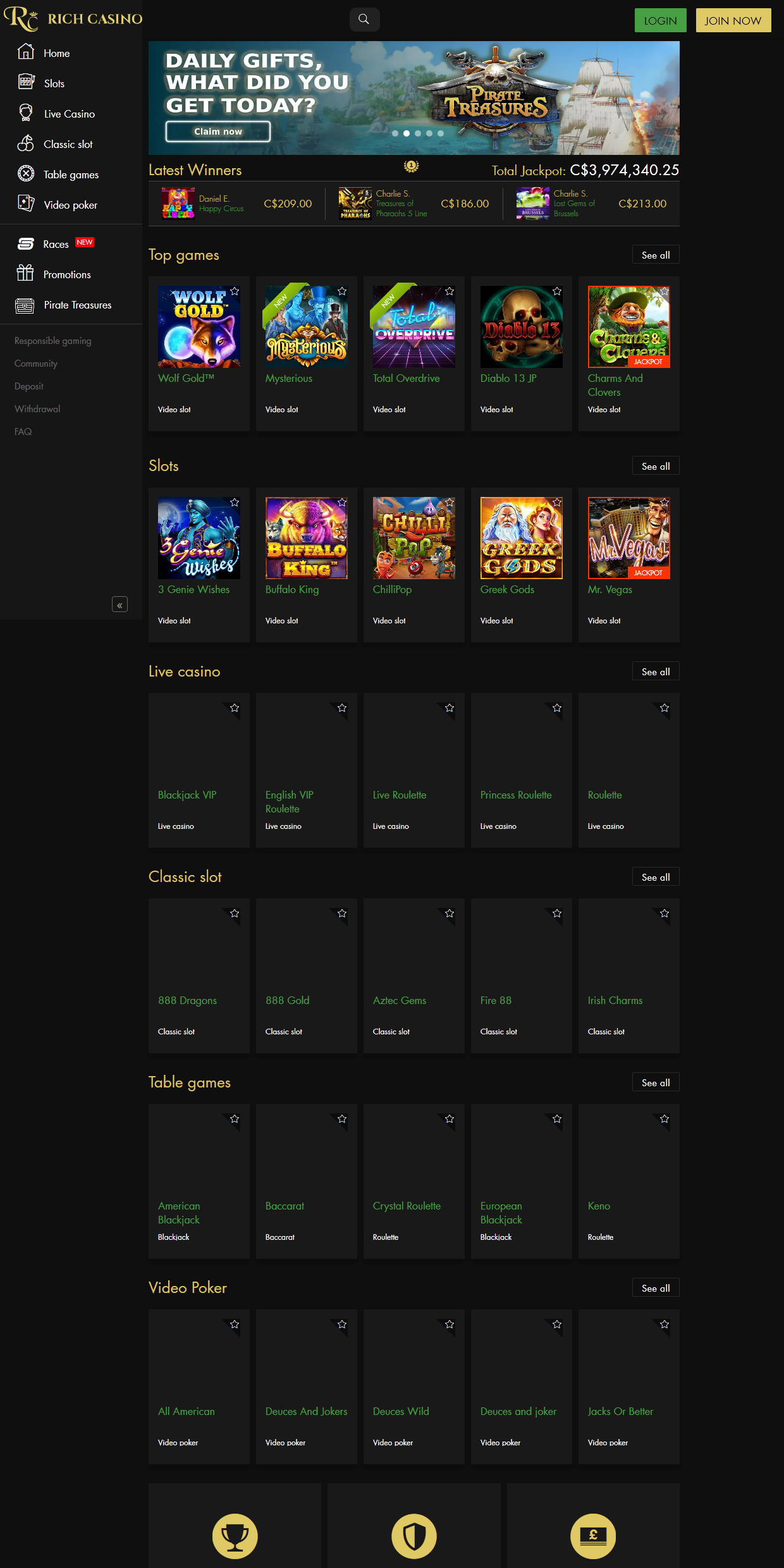 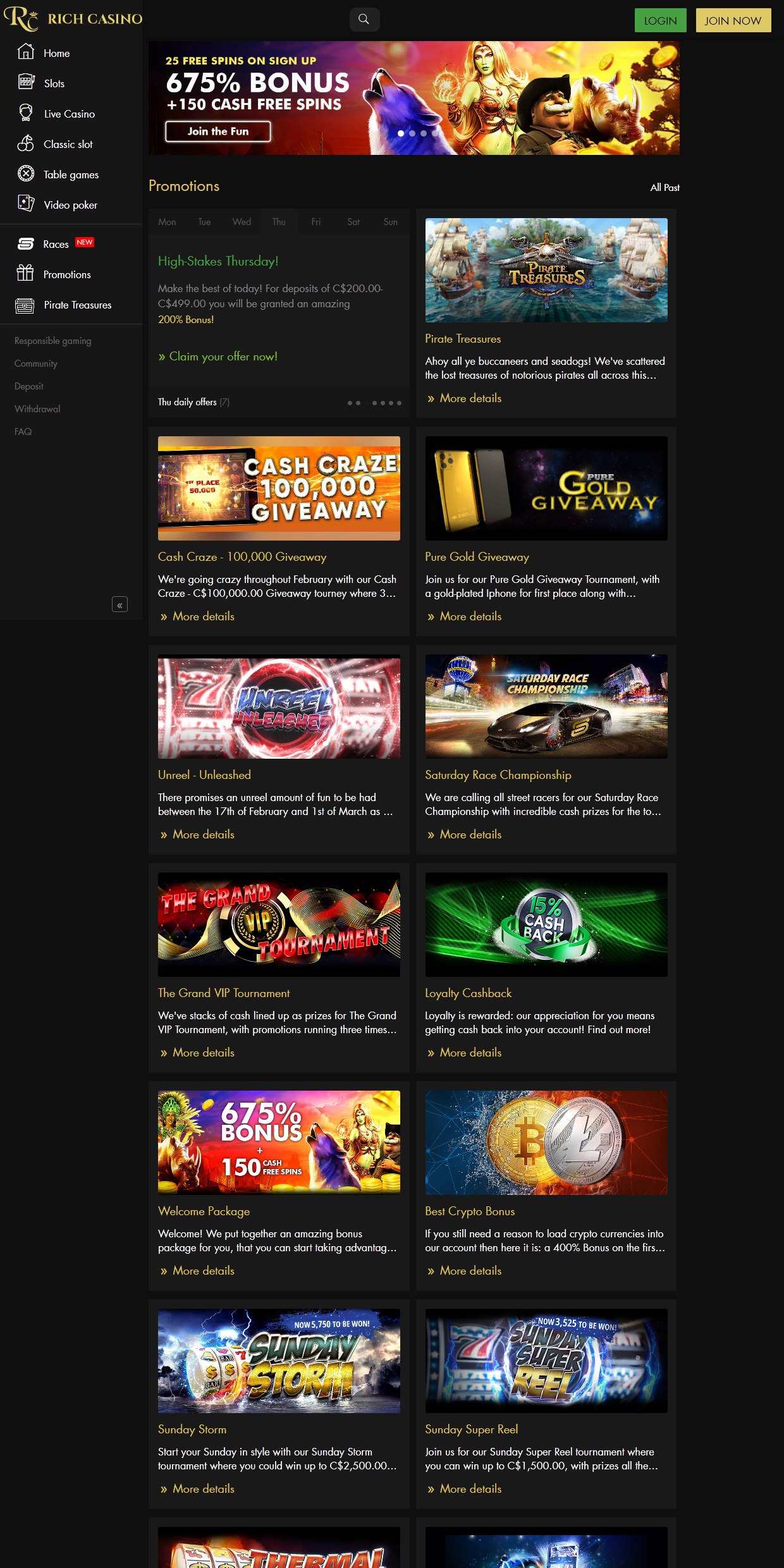 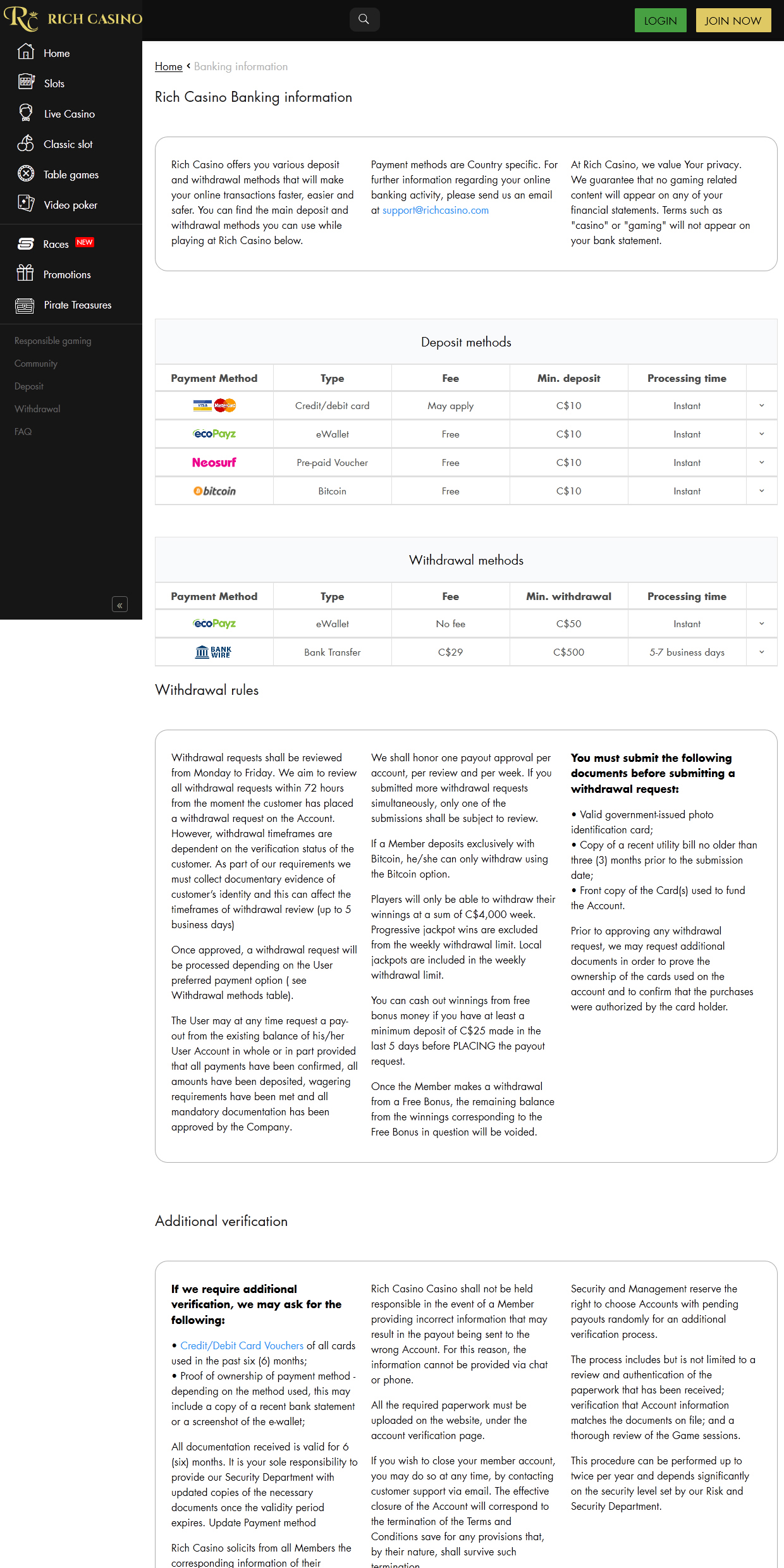 Living up to its name, the reviewed casino is rich with games. It features a few hundred of pokies delivered by three providers and a quality live lobby powered by Vivo. Players will meet here some top games such as After Night Falls, At the Copa and Good Girl Bad Girl, and participate in staggering pokie tournaments that run on an ongoing basis, at any time one visits Rich Casino. Fun and excitement are added to the casino action thanks to multiple bonuses of different types, from simple reloads to weekly cashback that will replenish player’s bankroll after its being busted. In all respects, the reviewed online casino is an ideal place for newbies, seasoned gamblers and everyone in between.

Rich Casino has a neat, eye-catching design with solid black background and menu block to the left. When on the homepage, a player can see quick links to top games, recommended pokies and other game content. At the top banner, there are a few alternating promotions that highlight a trendy bonus or a recently released pokie. In general, the visual web design of the casino site is OK – there is nothing extraordinary about it but it looks pleasing on the eyes. Besides, it has intuitive interface and two Support channels for resolving any issue, if any. There is no need to download anything to play in Rich Casino because the site provides a browser-based experience with instant access to games. Signup procedures are industry-standard and take a couple of minutes to complete.

Deposits and withdrawals in Rich Casino

Right after registration, a deposit functionality gets unlocked. To top up the zero account, a user should enter the Bank section and pick one of the following: Visa, MasterCard debit cards, Neteller, Skrill, bitcoins or ecoPayz. Note that the minimum amount of $10 should be made (or an equivalent sum in bitcoins). Any moneys less than $10 will be rejected by the casino. When transferring New Zealand dollars or other currency from bank cards, a small fee may apply.

As is the case in many other gambling sites, withdrawal methods in Rich Casino are not numerous. Currently, they include just three methods such as Bitcoin, ecoPayz and bank wire. Among the three methods, only bank transfer requires a $23 fee, while other methods are absolutely free of charge. The min withdrawal for bank transfer is $500, while other options are more friendly as an NZ user can cash out the minimum of $50 (or an equivalent sum in bitcoins). All cashout applications are processed within 3 days, and the max transaction allowed by the casino is $4000 per week.

No technical issues or other problems arise when playing in the online casino on a mobile device. The site fits any screen perfectly thanks to the responsive layout. Mobile-tailored navigations are simple and friendly, while maintaining functionality of all casino sections such as Banking, Support and Games. Availability of a signup form makes it easy to initiate and complete registration on a mobile device, while existing users do not need a second account to enter Rich Casino on the go – the one created on desktop will fit. The mobile casino library comprises some 100 HTML5 games from the reviewed providers.

The casino presently features around 300 pokies that are delivered in nearly equal proportion from three providers such as Betsoft, Pragmatic and Octopus. Inside the lobby, a player can sort the default list by a few parameters (Recommended, A–Z, etc.) and also display games from a single provider. Overall, the collection of pokies is diverse, though the three vendors have different popularity and game quality, with Betsoft being the most sought-after company among the three. Below are given short overviews of each provider and some of their trendy pokies.

Saturated with pseudo-3D animations, Betsoft pokies are widely thought to be one of the best creations out there. Nearly every pokie from that vendor has something unique about it: outstanding graphics, funny symbols, high payouts or unusual bonus features. There is a peculiar property that most Betsoft pokies have. Imagine a big area with pokie reels and another area around the reels. The reels are dynamic, while the surrounding image is either static or has some simple animations. As for Betsoft pokies, the space around the reels is kind of continuation of what is going on inside the reels.

To illustrate the point, A Christmas Carol five-reel pokie, devoted to the Christmas time, shows Scrooge lying in his bed and with a candle in his hand. His body is a little bit animated and he is looking at the reels when they are spinning. When a winning combination occurs, the cold-hearted miser turns his head to the player and moves his lips as if saying something. This kind of one-directional “interaction” is so funny that many NZ players adore staring at the characters like these rather than looking at the spinning reels. Anyway, users can find here many fantastic pokies with cartoon-style animations such as Frankenslot’s Monster, Weekend in Vegas, Pinocchio, Good Girl Bad Girl and Safari Sam to name a few.

Some Betsoft pokies available in Rich Casino come with a progressive jackpot. Examples are The Glam Life, Mr Vegas, Slots Angels and At the Copa.

Generally, a legal NZ user will be excited to explore one Betsoft pokie after another. They are rich in features and have wild symbols (and their variations), many kinds of bonus rounds, free spins (also with a mode selection feature) and affordable bet sizes. Playing them is pure pleasure, without exaggeration.

Pokies from Pragmatic look bog-standard. Some of them seemingly lack imagination while others just repeat math and paytable structures of one another. At the same time, Pragmatic Play games are popular with gamblers around the world and in New Zealand. The answer is that they are very easy to understand. Simplicity is not always synonymous with low quality and this message proves true with regard to Pragmatic pokies, which tend to be down-to-earth yet well-balanced, eye-pleasing and beneficial. Findings reveal – and provider’s official statements say – that their pokies have payouts at the level of 96-97% in average, which is a high value as compared to others. Top games available in Rich Casino are 3 Genie Wishes, Da Vinci’s Treasure, Leprechaun Carol, Triple Jokers and Journey to the West, among others.

Octopus pokies look generic and straightforward. Most have just several basic features including a wild, scatter and free games. Payouts are average-sized and most belong to the group of Low Variance games, meaning they pay off frequently but with smaller amounts. Popular pokies from Octopus are Cool Stone Age, Diablo 13 and Quest for the Minotaur – these can be compared to the best examples from some industry trendsetting companies. Besides, Octopus has many three-reelers, which Betsoft and Pragmatic cannot boast of. Fans of retro pokies can play Bankroll Reload, Big Bang, Fruit Slot and other vintage online machines developed by efforts of the Octopus team.

Cutting-edge technologies, super realistic experience and flexible bet options are what many gamblers like about Vivo live tables, let alone a great variety of standalone tables. They get all game types covered: live blackjack, roulette and baccarat, all with a difference. New Zealand users are not restricted from entering any live table after successful signup.

Promotions and bonuses in Rich Casino

If the game content in Rich Casino is moderate in quantity, the bonus program is awesome. It has over 40 promotions, some of which overlap each other and run simultaneously. New users get two welcome packages: one for fiat depositors and another for bitcoin users, each consisting of three deposit bonuses. Besides, the “normal” welcome package also gives 110 free spins linked to the reload bonuses plus 25 free spins on signup.

Regular punters have a tremendous choice of reload bonuses every day of the week, free spins, pokie tournaments with various cash prizes for winners, a generous cashback scheme and much more. Overall, the casino bonus program really is fantastic and can be recommended to all NZ users without exception.