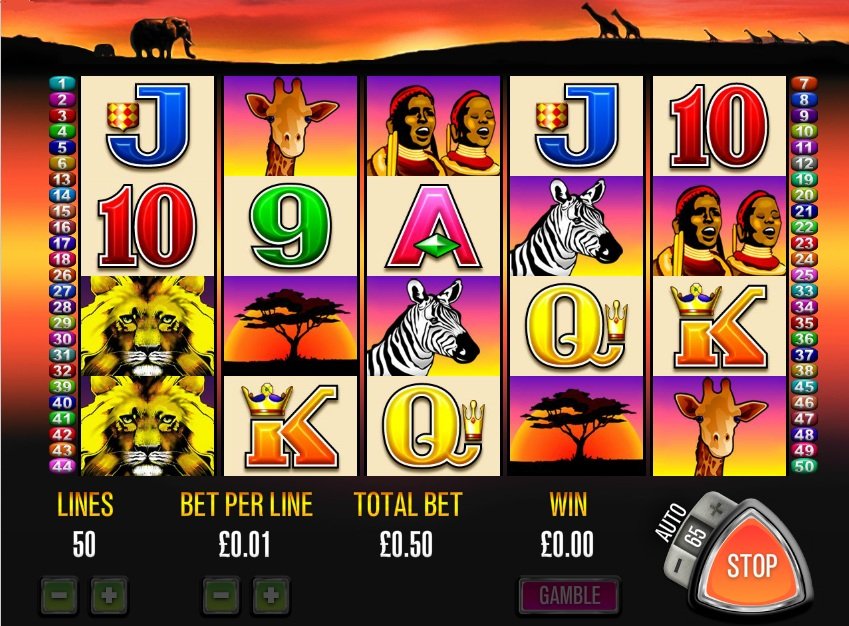 50 Lions is a low-volatile pokie with 5 reels, 4 rows and 50 paylines. The Aristocrat’s game has been very popular with gamblers for many years because it lets you take advantage of numerous bonus features such as free spins, stacked symbols and added wilds during free spins. The African theme used in the pokie is greatly manifested in its symbols and black silhouettes of big animals on the background picture behind the reels. Due to flexible bet sizes, 50 Lions will be attractive to many kinds of players including low-rollers and high-limit punters.

The pokie has an unusual 5×4 reel configuration with 20 visible symbols. This results in more winning combinations created as a result of each spin. The pokie’s name reflects two peculiar features: first, a lion is one of the symbols used here and second, this symbol is stacked, meaning that you will often see many lions (sadly, not 50) on the reels at a time. Another great thing is that the lion is a high-win regular (non-feature) image, with five of them awarding x1000 ($3000).

As for other symbols, Aristocrat decided in favor of card deck values (9, 10, J, Q, K and A) as low-pay symbols. The prizes for them are x10 to x400 for three, four or five of a kind. Bigger wins come with themed symbols such as a tree against a rising sun, two native African women, a giraffe and a zebra. The top award is given away by five zebras collected on an active payline (x500 or $1500).

As you might know, pokies are often described by the term “variance”. In high-variance pokies, payouts occur rarely but the potential wins are bigger. In low-variance games, winnings come on almost every spin but they are smaller in size. Players who prefer a less risky gameplay, tend to choose pokies with low variance that allow them to extend their bankroll for longer. 50 Lions is a spectacular example of a low-variance game that is very likely to pay out regular small amounts.

A diamond is a wild symbol that stands in for all regular symbols helping them complete combinations. The wild has some restricted functionalities since it cannot create its own combinations. Besides, it lands only on reels 2, 3, 4 and 5. However, the diamond is still a very useful symbol as it comes into view very often, contributing to other symbol payouts.

A flower symbol is a scatter that lands on reels 1, 2 and 3. Hitting three of them at a time activates 10 free spins. You have the chance to re-trigger the feature if 3 scatters land again but this can be done just once and only 5 free spins are granted for the second time.

Well, ten free spins seem to be scarce but the positive side is that an extra wild symbol (Diamond) is placed on the reels on every free spin. So you will end up the feature with ten wild symbols that would definitely add extra value to your spins. In case of re-triggering, the wilds continue getting added on top of these awarded in the previous 10 free spins. And this would provide very decent wins.