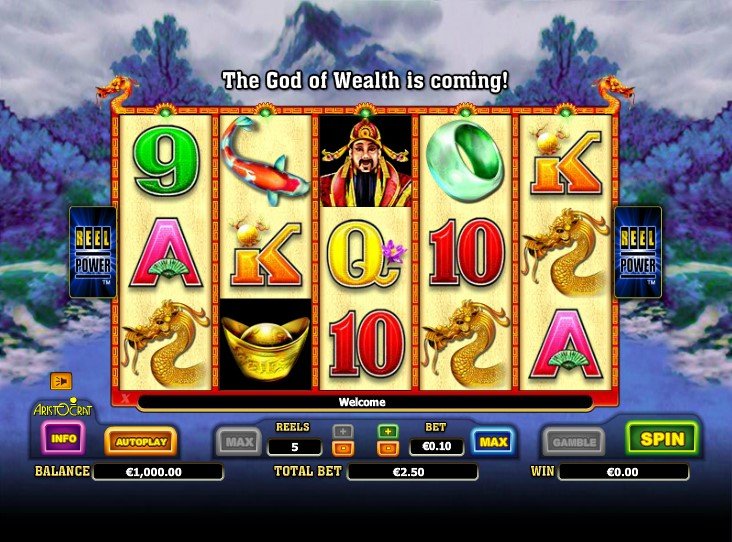 Choy Sun Doa is devoted to the eponymous god of prosperity and wealth worshipped centuries ago in China. The pokie has a strong design statement with the intensive Oriental twist and themed symbols that add to the Chinese aesthetics of the game. You will experience the Aristocrat’s branded feature known as Reel Power where you can choose how many reel positions to put into play. In terms of features, the pokie has wilds, scatters and five free spin modes that differ in the number of spins and a wild multiplier effect.

The pokie has no paylines but uses a 243 ways to win approach to create combinations. Three matching symbols, or greater, need to be located on adjoining reels, not in any preset order known as paylines. Due to this unusual configuration, which is often found in Aristocrat and Microgaming titles, you get a way more chances of hitting numerous combinations within a single spin.

All the five reels are active by default when you enter the pokie. You can reduce the number of reel positions by deselecting one or more reels. Whenever you deselect them, the middle row always remains active so if you leave only the first reel in play, you still have 7 reel positions (3 positions on the first reel and 1 on each of the disabled reels). By doing this, you can streamline your betting expenses. For example, you get five-of-a-kind combos very rarely in the current session so you can consider switching off reel 5 in order to bet less.

Apart from removing or activating the reels, the pokie has only one option for changing a bet size. By clicking “+” or “-“ buttons near the BET indicator, you can adjust a bet size from $0.25 to $62.50 per spin. Alternatively, click MAX to make the maximum possible bet.

Symbols on the reels include colorful playing card values (nines to aces) and themed symbols. The latter are represented by typically Chinese items such as a red envelope with hieroglyphs, koi fish, a nephrite ring, a gold coin with a square hole at the center, and a golden dragon. Playing cards pay out x5 to x200 for three to five of a kind, while themed pictures pay higher, with x1000 ($2500) being the maximum win awarded for five Dragons.

The Chinese deity himself is a wild symbol that acts as a substitute for all non-feature pictures. In the base game, its capabilities are only limited to substitution but in free spins it becomes a very profitable symbol as it bears a multiplier of up to x30 determined by the free game mode you have selected.

Five scatter symbols represented by the Gold Cup pay out the pokie’s highest jackpot of $3125. To get the prize you need to play at the maximum bet, otherwise the payout will be smaller as it is calculated based on the total bet.

On hitting three or more scatters, you will see five feature options to choose from:

A long-term theoretical return is almost the same for all the five modes so it’s up to you which to choose. If you prefer spreading the risk over 20 smaller wins, pick the option with the lowest multipliers but if you hope for one massive hit, then go for less spins but a higher multiplier. During any free game, a Red Envelope landing on reels 1 or 5 grants a random coin prize of x2 to x50 a total bet

The pokie has a standard “Guess the card color/suit” gamble feature where the winnings earned in the base game can be increased by x2 or x4.