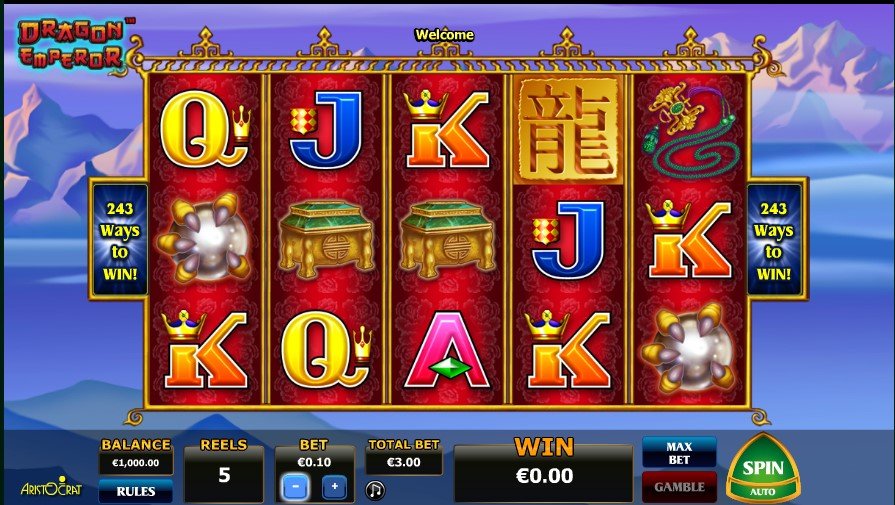 Dragon Emperor is a 5-reel game belonging to the family of Reel Power pokies from Aristocrat. Following the developer’s favorite Oriental theme, the pokie is fully dedicated to Chinese culture. One thing that hits the eye is an enormous maximum bet of $750 per spin and this a perfect offer for high-rollers. The pokie has a wild symbol, a scatter, free spins and a useful Reel Shuffle feature that can enhance the outcome of your spins. Cash prizes are very tempting – just get five scatters and earn a massive $30,000! Other awards are also impressive and really worthwhile your attention.

At the basis of the pokie mechanics is the Reel Power model. If you are not new to online gambling, you should have met the pokies with 243 ways to win, for example, these from Microgaming, NetEnt and some other vendors. The Reel Power system follows basically the same principles. There are no preset paylines, and winning combinations are formed by matching symbols collected on adjacent reels left to right. The reviewed pokie has only 8 regular symbols and this is very good for you because the fewer symbols are used, the higher chances that they match up as needed.

The set of symbols is represented by high playing cards with the values of J, Q, K and A. You will often see them landing because they are low-paying symbols with payouts ranging from x5 to x150. The remaining ordinary symbols have been designed to fit the Chinese theme and they include a golden lucky charm on a string (x350), a big golden and green box (x500), dragon’s claws gripping an orb (x800) and a dragon emperor (x1000). A combination must consist of at least three matching symbols in order to count as a winning combo.

This is one of the few pokies around that is targeted at the widest audience of both low-rollers and high-rollers. The minimum bet is just $0.30 per spin while the maximum reaches a stunning $750. As there are no paylines, their number cannot be changed. The only adjustable option is a coin value which is changed by using a slider. In view of the huge maximum stake, it is small wonder that winning amounts in the pokie are also very high. As is said above, the top award that regular symbols give away equals x1000 a coin value that you have chosen. If you play at the minimum stake, the top prize will be just $30 but choosing the highest possible bet you can grab $25,000 for five dragon emperors! Payouts for special symbols are more lucrative and they are reviewed in related paragraphs below.

A dragon is a wild symbol. In the base game, all it does is substitute for all regular symbols. Sadly, it cannot create its own winning combos. Nevertheless, it takes part in an interesting Reel Shuffle feature that is exclusive to Aristocrat as far as is known. The feature is activated when three stacked dragons appear on reel 5. This makes all the reels swap randomly and produce a winning combinations. For example, you get reel 5 covered entirely with wild dragons. After the swap, the wild reel 5 changes places with reel 1, thus you get the first reel fully wild. This gives you a very big chance of hitting a combination. The Reel Shuffle feature is also available in free spins.

A Chinese hieroglyph acts as a scatter symbol. Scatter payouts are moderate in size, with the maximum of x40 a total bet. But considering the jaw-dropping maximum bet, the ultimate scatter win can be impressive. Placing the maximum $750 stake, you will win $30,000 for the combination of five scatters. Three and four scatters pay out x2 and x10, respectively, which is not bad, either. Three scatters would suffice to trigger 7, 10 or 15 free games. Every free game one wild dragon symbol is always visible on reel 5. This can be useful when you get a four-of-a-kind combo so the wild located on the fifth reel lengthens that combo and actually makes it a five of a kind. Moreover, the Reel Shuffle feature also occurs in free spins.