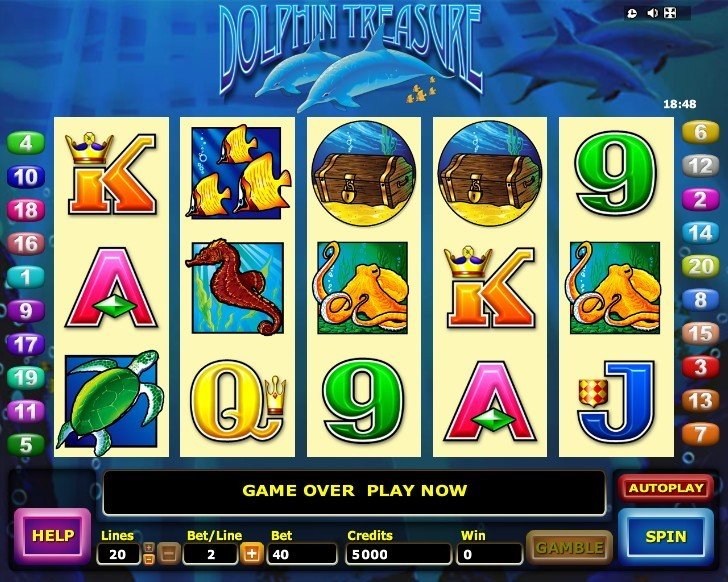 Dolphin Treasure is a 5-reel pokie devoted to a sea theme. There is nothing notable about the features used in the pokie as Aristocrat have equipped it with just a basic set of bonuses that most of today’s 5-reelers have such as a wild symbol, scatter and free spins. What makes the pokie stand out is very high winnings that everyone can grab being lucky. Just get five scatters and win $20,000 or better yet land five wild symbols for even bigger prize of $22,500. Dolphin Treasure has easy rules and fast gameplay so it would be a great starting point for novices who want to solidify their gaming skills and still have fun.

The reels of the pokie seem to be submerged into the ocean, with a couple of dolphins swimming by and air bubbles rising to the surface. Aristocrat released the game in 2011 so one can hardly expect the pokie to have superb graphics and outstanding bonus solutions. Its symbols look nice but they lack that sort of refinement and detail which is often found in many contemporary pokies. Anyway, the symbols can be conveniently grouped into two subsets: playing card and themed icons. As is usually the case, playing cards (9 and higher up) pay lower and payouts range between x2 and x125. To count as a win, matching symbols need to be aligned left to right.

Themed symbols are represented by sea creatures including fish (x250), octopus (x250), starfish (x400), sea horse (x750) and turtle (x750). The values shown in brackets indicate a multiplier applied to a line bet if a related combination consists of five matching symbols. In cash equivalent, the highest prize produced by non-feature symbols is $1875.

Sunset in the sea is a wild symbol that acts as a substitute, giving a helpful hand to regular symbols when completing combinations. Apart from being a substitute, the wild also has the following advantages that would provide extra profit for you:

A closed chest lying on the ocean floor is a scatter. As you might guess, it pays in any position but to get at least x2 a total bet, you need to land two of them anywhere. Three or more scatters pay x5, x20 and x400, accordingly, and trigger 15 free games with all wins trebled during the feature. If to calculate the max scatter win, it will be $20,000 on the maximum accessible stake which is, to recap, $50. Free spins can be retriggered during the feature.