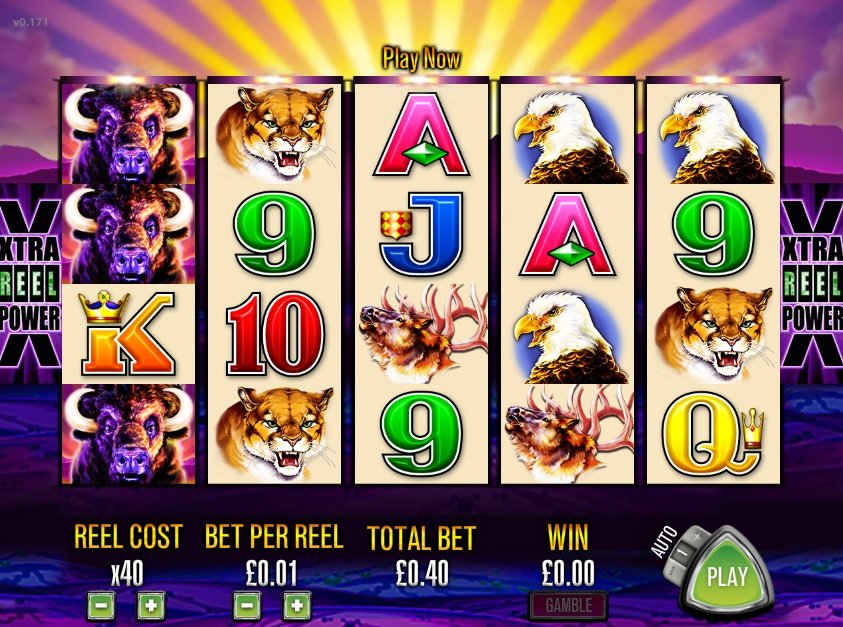 Buffalo is a wildlife-themed video pokie featuring 5 reels and 4 rows of symbols. Aristocrat equipped the pokie with its patented Xtra Reel Power mechanics that enables the player to select how many reels are activated. Apart from an interesting theme, the pokie has some highly rewarding bonus features such as stacked symbols, free spins and a cumulative multiplier of up to x27. The gaming action involves 1024 ways to win instead of traditional payline patterns. Give a spin to this hugely popular game and enjoy the majestic animals brought to life by the Aristocrat software developer.

Buffalo is based on a 1024 ways-to-win system where winning combinations are created by two or three matching symbols that fall on neighboring reels beginning with the utmost left reel. As distinct from payline-based pokies where payouts are generated only when you get a specific number of matching symbols exactly along a payline, pokies like the reviewed one are more flexible and yield winning combinations more frequently, though they are smaller in value.

This is a trademarked feature patented by Aristocrat. It allows the player to deactivate some reels and thus wager less. For example, the maximum cost of play with only the first reel activated is $1.25, while having all the five reels in play would cost the maximum of $50 per spin. Reels are switched off beginning from reel 5. Naturally, it would be inefficient to leave only the first reel active because most winning combinations created across reels 1, 2, 3 and further, will be lost. However there are at least two reasons that can encourage you to try playing with only the first reel selected:

But as a rule of thumb, it is better to have all the five reels enabled.

A total bet would depend on the number of reels chosen but if you want to play in a traditional way, i.e. with all the five reels, a total bet would vary from $0.40 to $50 per spin.

There are six playing card symbols and five themed symbols in the pokie. Playing cards 9 through A award up to $125, while payouts for animal icons reach $375 if you hit five buffalos in a proper order. The latter and nine are able to create two-of-a-kind combos. As you can see, winning amounts are not that high, however winnings occur very often as is many times the case in pokies based on 243/1024 ways to win models.

A desert landscape with some buildings on the skyline is a wild symbol that lands on reels 2, 3 and 4 only and replaces all non-feature symbols. Sadly, wilds do not complete combinations by themselves but they are extremely profitable during free spins (see details in the next paragraph).

Three, four or five gold coins scattered across the game field will bring you 8, 15 or 20 free spins respectively. The feature can be retriggered if at least two scatters occur in the feature. Should this happen, you are awarded five additional free spins.

Any wild that appears on reels 2, 3 or 4 during free spins carries a multiplier of x2 or x3 determined randomly. Two or more of these values are multiplied, not added together, so there is the chance you will enjoy a massive multiplier of x27 (3x3x3) that will boost your winnings to completely new levels!