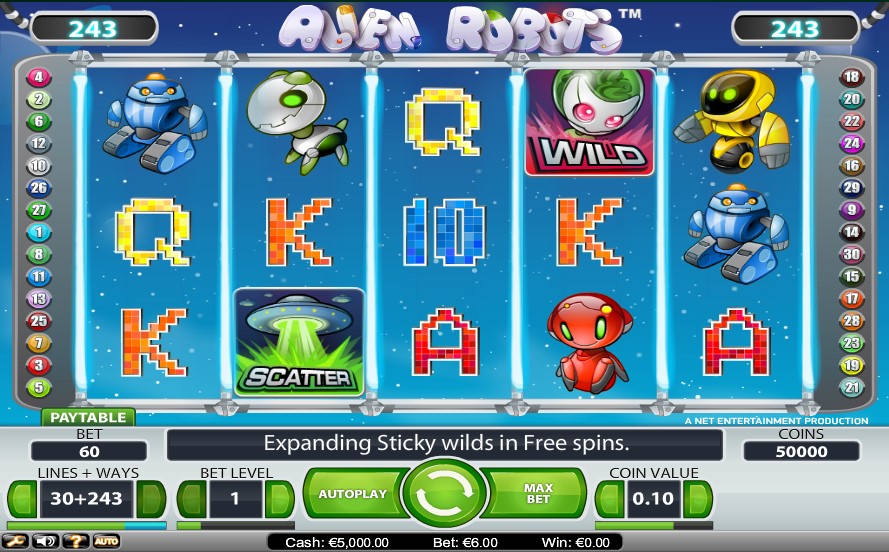 Alien Robots is a funny space-themed video pokie with cartoonish robots and vivid graphics. What makes the pokie special are two betting modes, which can be found nowhere else in creations of other providers. The thing is that the gambler has the option to activate 30 paylines or 243 ways to win plus 30 paylines, and harvest good winnings from both modes being active. Expanding wilds and respins add fun and diversity to gameplay, making you freeze in anticipation of even better wins. The max jackpot up for grabs is a grand $50,000 on one single spin.

Robot symbols used in the pokie are designed as how sci-fi writers of the last century thought of future robots. They look in a way simplistic, without much detail, with stereotypic green neon eyes and massive bulky heads. Playing cards from 10 to Ace present a glaring example of 8-bit style pixel artwork that evoke some nostalgia for primitive arcade games in the early days of computers.

Some pokies have a certain number of paylines, while the others are based on no-payline 243/1024 ways to win models. Alien Robots has a unique solution that combines both of the above approaches and moreover they are user-customizable. The pokie has 30 paylines, each accepting $0.01 to $2.5, so a total spin bet is $0.30 to $75. If you prefer traditional gaming, you just wager on the paylines and spin the reels.

The second bet option is to enrich the payline gaming with the additional “243 Bet Ways” mode where winning combos are created by 3+ identical symbols gathered from left to right on adjacent reels. As a result, you get an exciting mixture with excellent hit potential. But choosing the two modes at a time increases a bet size twice ($0.60 at min/$150 at max).

Choosing the bet line and bet way schemes to be active simultaneously is a great way to win bigger. Consider the following example: you have wagered $150 and got five A’s on each of the five reels which is subject to a x120 payout ($600). These five A’s have not stopped along a preset payline but all the same you would earn the award because the 243 ways system factors out a symbol position on the reel as long as identical symbols are located on neighboring reels.

A grey-headed robot forcing its way through fire is a wild symbol. During base game, it plays role of a simple substitute and cannot create its own winning combos.

Free spins are the centerpiece of the pokie because it is here that all the main features unfold. The bonus spins are triggered by three or more UFO scatters when they come in any position. You get 10, 20 or 50 free spins with the possibility to prolong them if 3+ UFOs land again. During free spins, the wilds become more alluring from how they behave in base game. Whenever a wild appears, it expands to cover three positions, gets sticky and one respin is awarded. After one respin, you get a cash prize if any winning combo occurs, the sticky wild reverts to a regular wild and free spins continue.

Even by today’s standards, Alien Robots is a “mediocre” pokie with a small number of features including a wild, a sticky wild, free spins and respins. However, a surprisingly successful fusion of the payline and no-payline gaming frames makes the pokie a unique and exclusive game you must give a try.