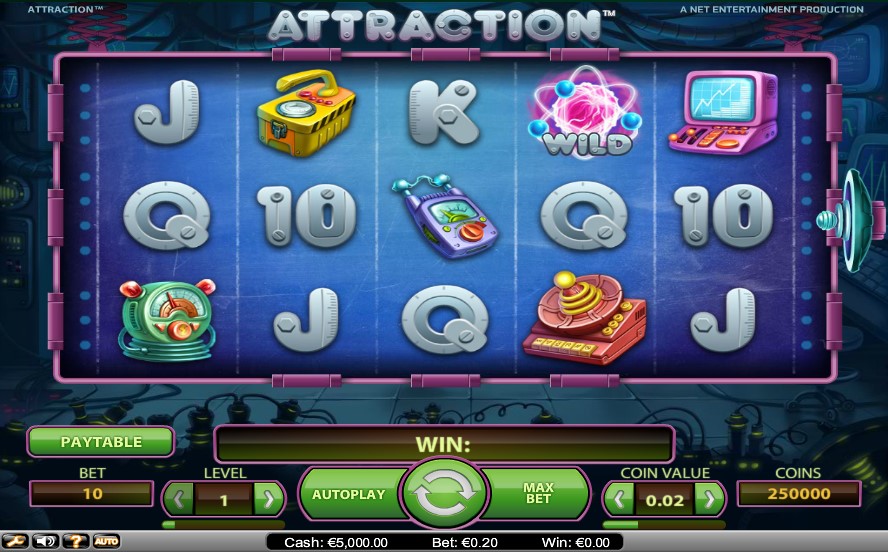 The pokie is not about attraction among humans – this is about physics. The game takes you to a lab where researchers study a force of attraction between different masses with the help of electromagnets. Put on your goggles and go ahead to win big! The key features to attract your attention are wilds, sticky wilds and respins. But the most compelling thing is a big magnet outside of the reel frame, which transforms a group of symbols into wilds and generates decent cash prizes. Attraction is another creative game from NetEnt that will appeal to those who want to try something new.

The creatively designed symbols in Attraction strike the eye. You know that many pokies use playing card ranks marked from A and down. This pokie does the same but the traditional playing card icons look like metal fixtures of some unknown purpose and fit admirably into the physics lab theme. There are 5 reels and 10 fixed paylines that are always active. A coin value is adjusted between $0.01 and $1, and you can change the number of coins (Bet Level indicator) from 1 to 10. Gamblers who prefer low-risk gaming can bet $0.10 per spin, while high rollers can wager up to $100.

Along with 10 to A pics that pay out x5 to x100, you will come across high-paying symbols that depict various measurement and test equipment that is allegedly used in a lab. Themed symbols are more generous and award x8 to x500 for three, four or five of a kind. In cash terms, the highest regular payout is $5000 (five red devices resembling a typewriter and radar hybrid). As in many other pokies, Attraction is based on a left-to-right system.

A picture of electrons moving around an atom is a wild symbol. It can only land on the second, third and fourth reels and substitutes for all symbols on a payline. Wilds cannot complete payable combos on their own but they are the centerpiece of gameplay because they are involved in a bonus feature described below.

At the beginning of every spin, a magnet appears at a random position outside the reel frame. It can be anywhere above, below, to the right or left. When the reels start spinning, the magnet radiates a magnetic field aimed along the reel or row where the magnet faces. If a wild lands on the same reel or row as the magnet, the symbols lying between the wild and the magnet morph into wilds.

After that, you get a payout according to the paytable, if you have any, and are awarded a respin. During the respin, the wild symbol becomes sticky and two magnets are activated. If another wild appears again on the same reel or row as the magnet, you get the second respin. As a result, the feature made up of two, three or more respins can bring you excellent prizes.

The pokie really looks cool, though its features are not diverse enough as compared with an average 5-reel pokie of today. The highlight of the game is a one-of-a-kind magnet feature that triggers one or more respins. The jackpot prize is $5000.