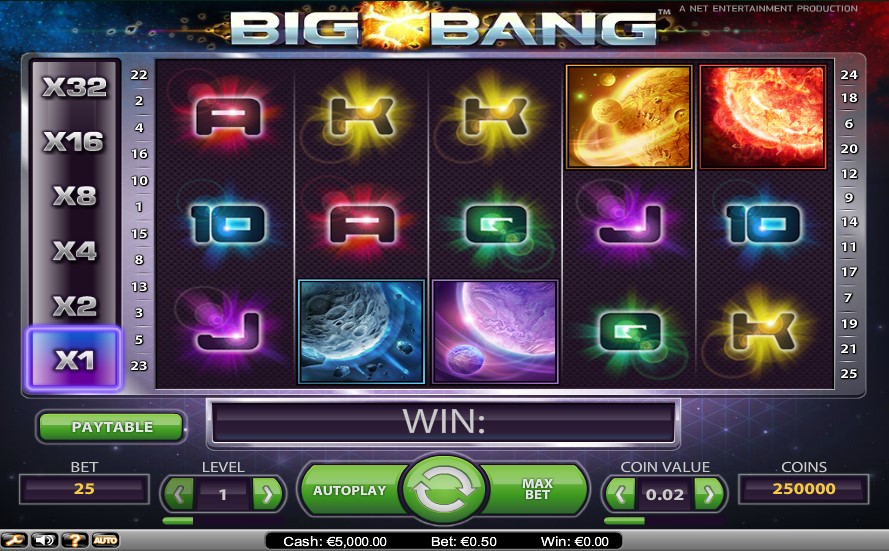 This colorful pokie takes you to the times when planets, stars and galaxies were getting born following the Big Bang. On the reels you will come across majestic views of deep space, young stars that are just at the beginning of their lives, and planets of the Solar system. The pokie boasts of a potent multiplier meter that would make your winnings reach the Moon if you have 6 subsequent wins. Explore the dark mysteries of the Universe with this pokie and try to win a stellar $64,000 jackpot.

Big Bang is a space-themed video pokie with atmospheric artwork and a nice package of themed symbols. It features 5 reels and 25 fixed paylines that are always active on every spin. Before setting the reels in motion, you are welcome to change a bet to your preferences. You can do this by adjusting a coin value between $0.01 and $0.50, and changing a bet level from 1 to 4. The total amount you can wager per spin varies between $0.25 and $50.

The pokie has no scatter symbols and in fact its features are not abundant, however its visual aspect is perfect. Half the symbols are represented by traditional 10 to Ace values, which are at the bottom of the paytable. As you know, symbols like these are often found in online pokies, but here they are given a thematic polish. You need to get at least three of them on a payline in order to obtain x2 to x70 a line bet. Other symbols are more generous in how they award, with the top three prizes being $1000 (Earth), $1400 (Moon) and $2000 (Sun). These prizes will be credited to your balance immediately if you get five of the same. Combos need to be adjusted left to right, as the case is in many other pokies around.

A flaming orange star is a wild symbol that performs a rather typical set of functions. It substitutes for all other symbols and assists them in completing combinations. On the negative side, the wild fails to create its own combos – it is just a helper for other symbols.

The multiplier meter is shown on the left-hand side of the reels. It has six values increasing in a geometric progression that starts at x2, so the highest multiplier on the scale is x32. When you get a win, the multiplier of x1 applies, after which the Meter increases to x2. If the second spin is successful, the win resulting from that spin is multiplied by x2 and the Meter again goes up its value to x4. If the third spin turns out to be a win, your awards are quadrupled. The next successive wins are subject to multipliers of x8, x16 and ultimately x32. If the winning streak ends, the Meter resets to x1. Thanks to the feature, you have the chance to grab $64,000 if you get five Suns with a x32 multiplier active at that time.

Big Bang is a simple game as for features, since the only remarkable bonus is a multiplier trail that progresses to x32. A wild symbol also adds some diversity to gameplay.