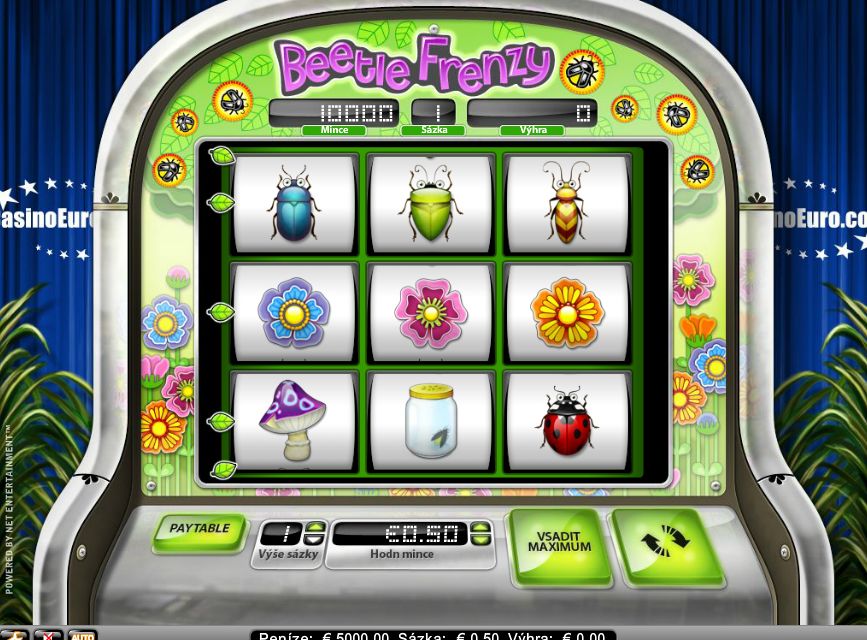 Three-reel pokies are simple and conventional games to a greater or lesser extent, but the same can’t be said for Beetle Frenzy, a three-reel pokie with creatively fresh design and innovative features. There is seemingly little space on any 3×3 field to unleash the full potential of bonuses but you will be greatly surprised to see three bonus features in Beetle Frenzy and a unique 9-symbol win plan that culminates in a $25,000 jackpot. Eye-catching animations, frequent wins and pleasant sound effects are definitely worth your attention if you like extraordinary gaming solutions.

With bright, predominantly green colors, the pokie looks fun and easy-going. It has 3 reels and 5 fixed paylines, three of them are horizontal and two run diagonally, crossing each other. The pokie is designed as if it is part of a physical machine with a silver matte cabinet and realistic buttons on a 3D panel. Everything around the screen is decorated with green leafs, multicolored flowers and flying insects, which creates a relaxed feeling.

A line bet begins at $0.10 and reaches the maximum of $5, so the maximum possible bet is $25 per spin. The paytable page is fairly big because the pokie provides many possible combinations, not just for three of a kind. For example, two ladybirds on a line award x1, three different flowers on a line pay x2 and nine different flowers filling in the entire screen pay x50 times a line bet. Along with standard three-of-a-kind wins, you can get great cash awards if nine identical beetles or flowers land on the screen: a bouquet of nine orange flowers will give away x300 (up to $1500), red flowers pay x400 ($2000), while nine blue flowers pay x500 ($2500).

The pokie has a scatter symbol, which is a golden apple. It pays in any position starting at 2. The more apples you harvest on the reels, the higher the prizes. For example, get seven or eight apples and scoop x200 or x400, respectively. But that’s not all. Nine apples covering all the nine places on the field will make your day, since you will grab a Super Win prize equivalent to $20,000!

A bug collector jar is a unique symbol as it stands out in what it offers. Get three of them along any payline to trigger a pick to win type bonus game. Once started, you will be presented with nine empty jars. Just select any of them and keep on doing so until you find a cross that ends the feature. The jars hide random cash prizes.

Three flowers of the same color appearing on a payline trigger an impressive flower frenzy feature resembling a board game by design. On a new screen, you will be presented with a rectangular field and its frame is made up of a trail of small squares, each depicting a flower or beetle. At the corners of the rectangle are black crosses. Your task is to move your piece along the trail to determine what prize you have won. Each square has a certain prize that is contingent on the symbol on it. The feature ends when the piece lands on a black exit square.

The Lucky Spin feature is a kind of compensation for the lack of free spins. If the same symbol is displayed on the four corners of the screen or around the central position, you earn a respin that involves the central reel only. The other two reels remain untouched by the bonus respin.

Beetle Frenzy is a nice rest from conventional pokies, just for a change. It has 3 reels, 5 paylines and a couple of interesting features where you pick objects or play a board game. Another unusual thing is availability of 9-of-a-kind combinations that award up to $20,000.