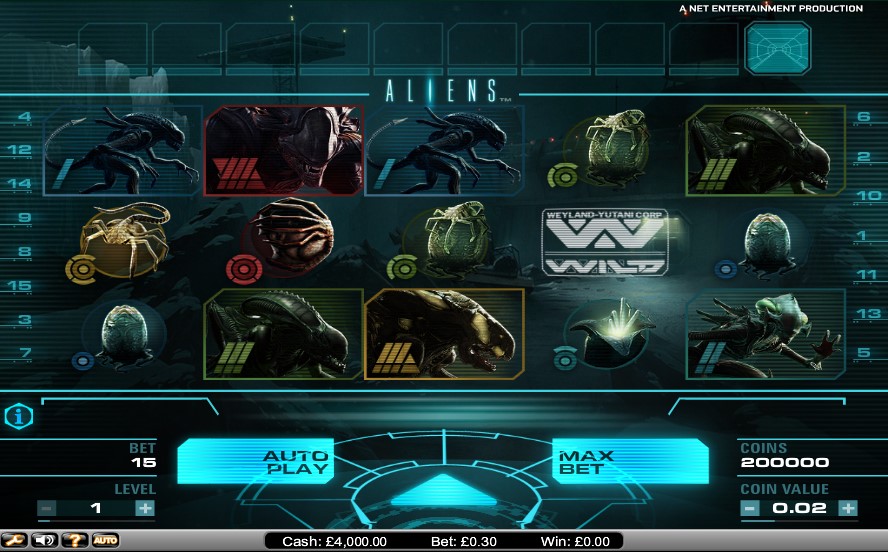 Play for real and get $6000 at Super Slots Casino!

This branded video pokie is totally based on the legendary sci-fi horror film created by Ridley Scott. Many years have passed since Alien came out but it remains one of the most extraordinary and thrilling films ever made in terms of awards, box office and special effects. The pokie developed by NetEnt in collaboration with 20th Century Fox also gained iconic status, just like the film itself. The pokie brilliantly recreates the dark, fearful and suspenseful atmosphere of the Nostromo, a huge space ship where the action unfolds. Here you will come across numerous features, a three-level gameplay and immense wins exceeding $0.5 million.

The NetEnt’s development team made a unique design to fit the theme. Every smallest element on the screen reminds you of the film and sinister aliens. Symbols depict aliens in different life cycles: an egg that will hatch into an ugly facehugger, an egg with its top opened, a facehugger sitting on the host’s face, an adult xenomorph and so on. Every kind of symbol has a small icon attached that vaguely resembles insignia – this is perhaps to let gamblers better differentiate which alien types are more and less valuable with regard to how they pay out. The pokie has 15 fixed paylines and a coin range of $0.01 to $10. The minimum and maximum bets are $0.10 and $150 per spin.

Level 1: Scan the ship for aliens

The game has three levels: The Search, The Encounter and The Hive. You start with level 1: The Search, where you choose a bet size and spin the reels like you do in any other pokie. Above the reels is an Alien Activity Meter showing nine insignia for each kind of alien. Every time you hit a winning combination, the symbols that make part of it are added to a related section of the Meter and raise the multiplier by x1. Next time you get the same symbols in a win, the multiplier shown on the Meter will apply to the winning amount. Payouts for hitting 3, 4 or 5 like symbols vary, with the minimum and maximum being 5 and 1000 coins (up to $10,000 at max). When the Alien Activity Meter is full, you progress to the next level.

The logo of Weyland-Yutani Corporation that owns the Nostromo is a wild symbol. It lands on reels 2–5 on the first level of the game and on any reel on the second level. It substitutes for aliens symbols and help them create combinations. When substituting, wilds are not added to the Alien Activity Meter.

Your task is to combat waves of aliens and advance to level 3 where you are to kill the Queen. All multipliers collected on level 1 move to level 2 and apply to winning combinations of respective symbols. With each new spin, you will have a payline covered with 3 identical symbols, from the lowest-valued (an egg) to the highest-valued (Queen) so you are going to have wins from the very first spin. Watch out for Ammo Clips that appear as an overlay and activate respins. Besides, they add to a special counter, thus extending the duration of level 2. If you manage to survive the waves of aliens without your ammunition run out, you proceed to level 3.

Level 3: Mop up the hive

Here you are issued the final objective: Eliminate the deadly queen by throwing grenades at her. At the beginning of the level, you are given 5 free spins. The Queen’s health is displayed on a bar consisting of 4 steps. Every step that you complete awards x150, x400 and x1200 a line bet. And if you kill the queen, you earn an ultimate award of x3600 a line bet (up to $36,000 at max).

Aliens is an atmospheric pokie that reflects the epic film to the extent it is possible for a pokie. Themed alien symbols, realistic graphics and three game levels – each with a twist – are a kind of addition to the Alien Universe and a source of fantastic middle-variance payouts.