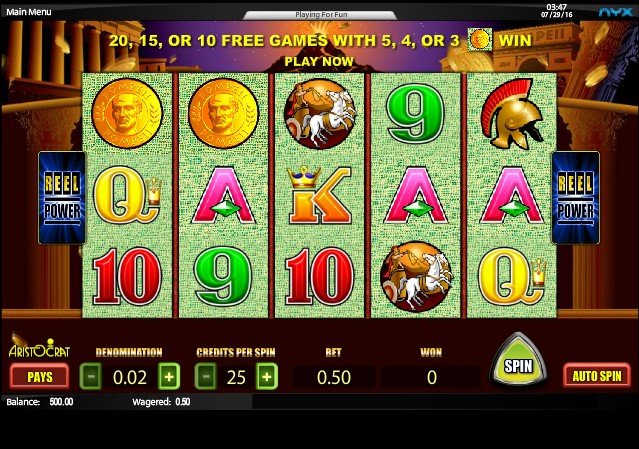 Play for real and get $2500 at Cafe Casino Casino!

The name of the pokie speaks for itself. The theme revolves around an ancient Italian city of Pompeii ruined to ashes by the eruption of Mount Vesuvius. Aristocrat released the video pokie back in 2004 so one can hardly expect top-notch graphics here. Anyway, the pokie can still catch your interest with good winnings of up to $12,500. However old it may be, the pokie has a wild with a potentially big multiplier of x15 and up to 20 free spins. Moreover, this veteran game is based on a 243 ways to win model where winnings happen much more frequently than in payline-driven pokies.

If you leave out the visual aspect that is definitely outdated, the pokie is by all means playable. Lack of detail in symbols and background may be a sort of disappointing but the pokie’s features are generally good and so are payouts.

This system is certainly familiar to all pokie fans as the no-payline concept is not an exclusive feature of Aristocrat. Briefly speaking, there are no paylines in the pokie. Regular matching symbols award a payout when three of them (or more) are found on neighboring reels and the utmost left reel must be the starting point for the combination. There are numerous analytical materials that highlight pluses and minuses of this system but one thing is clear: It provides opportunities for more winning combos that can be formed on a single spin.

The minimum bet is $0.50, while the maximum reaches $125 per spin. The pokie has an uncommon value located in the user interface section and titled as Credits Per Spin. Other pokie providers normally call it Number of Coins. Anyway, the Credits Per Spin indicator shows how many coins are put into the spin (25–125). By adjusting the Denomination value between $0.02 and $1, you can adjust your total bet in the aforementioned range.

Not all symbols relate to the ancient town of Pompeii. Aristocrat equips all of its pokies with low-paying symbols that refer to face values of playing cards. In the reviewed game, these symbols are 9, 10, J, Q, K and A, and their payouts are x5 to x200. Nines and Tens are the only symbols that pay out when two of them line up, while the rest must create a sequence of at least three identical symbols.

The four themed regular symbols are a chariot, a shield and sword, a helmet and something that looks like a medal or jewelry. They are the most generous images with payouts ranging between x50 (three chariots) and x2500 (five medals); the latter is equivalent to $12,500 at the maximum stake. The second largest prize in Pompeii is $10,000 at max (five helmets). It may be deduced that the level of payouts is pretty much good by today’s standards.

The erupting volcano acts as wild. It performs no other functions than substitution. Besides, it appears on reels 2 and 4 only, and this makes the wild a light version of full-featured wilds that are often found in other pokies. But in free spins the wild becomes a very potent symbol. If it substitutes on the second reel, the related win is multiplied by x3. If the wild is involved in a combination on the fourth reel, the winning amount is multiplied by x5. In case both wilds substitute, the resulting award will be increased by x15!

Free spins are triggered by three or more Coins that must land in a normal order, i.e. left to right like any regular symbol. Coins pay out x125, x500 and x1250 for three, four or five of a kind, with the highest prize being equivalent to $6250. The number of coins in a combination determines the number of free spins you win, 10, 15 or 20 free spins.