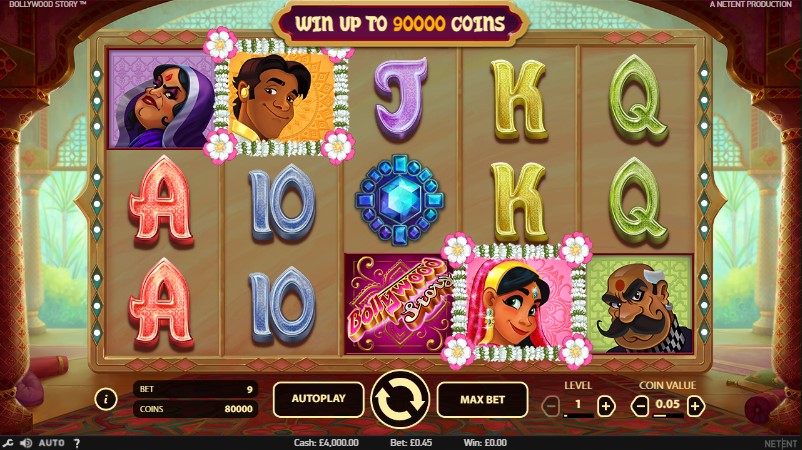 Indian film-making is concentrated around Bollywood that sells annually even more tickets than Hollywood. The main ingredients in their films are love and melodramatic passions, which always culminate in the happy end. The reviewed pokie from NetEnt will show you some glaring examples of Indian actors and award you up to $10,000. Among major features in the pokie there are Floating Wilds that appear on every spin and transform up to 6 symbols into wilds.

Bollywood Story is a 5-reel pokie with 9 permanently enabled paylines. The top prize you can win in the pokie is 90,000 coins and this huge amount is available if you hit the best possible combos during free spins. Graphic designers in NetEnt seem to have taken a short rest with this pokie because the game is not too much impressive in terms of graphics presentation. Overall, it’s ok but NetEnt guys could have done it better. The set of symbols include basic playing cards marked as 10, J, Q, K and A, four themed icons that depict Indian actors, and the pokie’s logotype with a patterned wording.

Payouts in the pokie are medium-sized but they occur very often thanks to the Floating Wilds feature to be reviewed below. Playing card values award x3 to x100, which makes up the maximum of $1000. Top payouts are $5000 (five young men), $7500 (five young women) and $10,000 (five logos). All of these are regular payouts that take place whenever three or more like symbols stop on a payline left to right. The pokie is designed as a low-to-medium variance game with frequent wins that tend to be rather small.

During every spin, a flower frame appears on top of 2 to 4 random symbols and fixes until the reels stop. The symbols over which the frames are found turn into wilds, so you will always have up to 4 wilds on every spin. However, this cannot guarantee wins on every spin because the floating wilds can stop on the fourth and fifth reels when you need reels 1 and 2 to be filled with wilds. Anyway, availability of the feature makes the gameplay very intriguing.

A blue adornment is a scatter symbol that counts in any position. It does not pay out any awards however big the number is. But hitting three of them start 10 free spins. If four or five scatters land in the main game, you will receive 20 and 30 free spins, respectively. During free spins, the floating wilds are active and this time you get between 3 and 6 floating wilds, which increases dramatically your winning chances. Free spins can be won again during the feature.

Bollywood Story is a quite simple pokie with just a couple of features including floating wilds and free spins. Floating wilds appear in all game modes. The maximum possible win in the pokie is $10,000, provided you have wagered the maximum bet of $90.