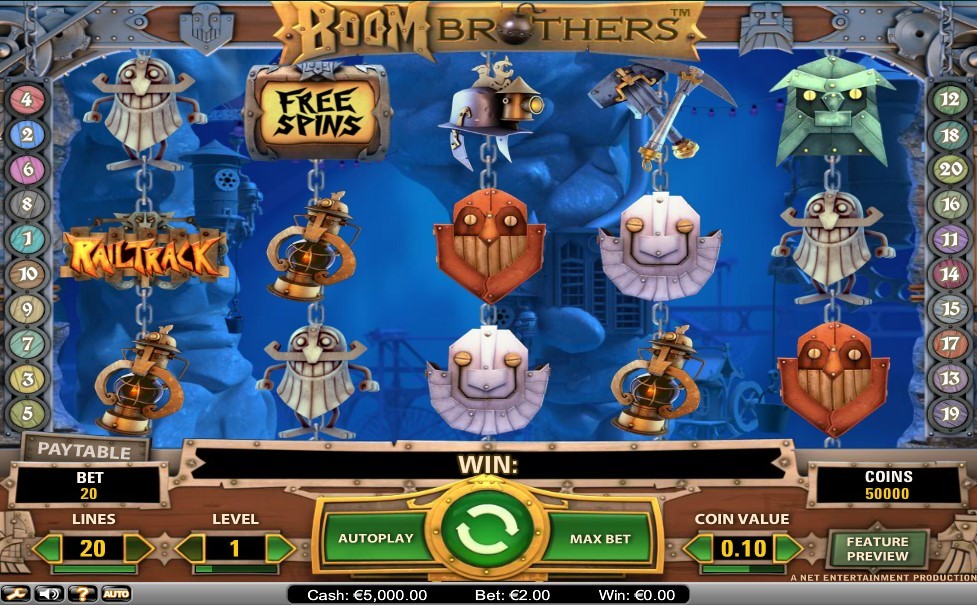 Somewhere underground, four boom brothers bite into rock to find diamonds. The tools they use are not so subtle – they are not above throwing a dynamite stick or firing a grenade to clear out debris. Boom Brothers is by far one of the most popular pokies released by NetEnt because it is filled with features and cute special effects that add fun. Each boom brother has his own random second chance bonus, so you never know what you are going to see on the screen when the feature activates. A fantastic bonus game gives you the chance to participate in trolley racing and win up to 1900 coins.

Though created and entered the online casino market in 2010, the pokie looks fresh and modern, chiefly due to unique characters and stunning graphics. The game has a steampunk style with ever-rotating gearwheels above the reels and symbols suspended to each other on a long chain. The background layer is fully animated, showing a mine with heavy-duty devices and steam blasts, which plunge you into the underground where artisans mine gold and diamonds. Boom Brothers is a 5-reel 20-payline pokie with bet sizes ranging between $0.20 and $100 per spin, so the game perfectly suits the preferences of most gamers.

Regular payouts in the pokie start at x5 (three helmets) and reach x500 (five white masks). In money terms, the maximum payout in the game is $2500, though features are able to generate more generous wins.

Sure, not every spin ends in a win. In case the reels that have stopped bring no winning combinations, one of four second chance features can start. The pokie selects randomly, which of the four features to launch. The point is that one of the four boom brothers appears on the screen and turns some non-contributing symbols into necessary ones. For example, a brother dwarf rides onto the screen on a trolley, leaves a TNT barrel on a random reel that explodes and makes that reel respin with a chance of hitting a combination. Or another dwarf fires a dynamite on one or more symbols transforming them into wilds. Note that the second chance feature will not necessarily lead to a more favorable arrangement of symbols. Anyway, you get one more chance to turn a no-win situation into a “win”.

A Free Spins sign is a scatter that initiates bonus spins when at least three occur in any position. Each free spin icon shows a random number that are then added to give a result between 8 and 50, which corresponds to the total number of free spins you have won. During the feature, all wins are tripled and each free spin symbol landing awards one additional free spin.

The wild depicted by a shell bomb substitutes for regular pics and pays out the first jackpot prize of x7500 times a bet if you hit five wilds on a payline. Once you play with the maximum acceptable stake, your win will be $37,500 on that combination.

Getting five pieces of track opens a bonus game played on a new screen. You will see three boom brothers, each in his trolley ready for the race. Below the tracks, there are three carts that you should select to reveal diamonds, gold or rubies. One of three brothers moves 1 or more steps towards the end of the track. The first brother to finish the race will blast the rock and awards you a bonus coin win within the range displayed for that railtrack. The maximum possible prize for the bonus is 1900 coins.

Boom Brothers is a top-rated pokie from Net Entertainment that features a high-paying wild, free spins, an innovative second chance bonus and an entertaining Cart Racing mini game. The best regular prize up for grabs is $37,500.