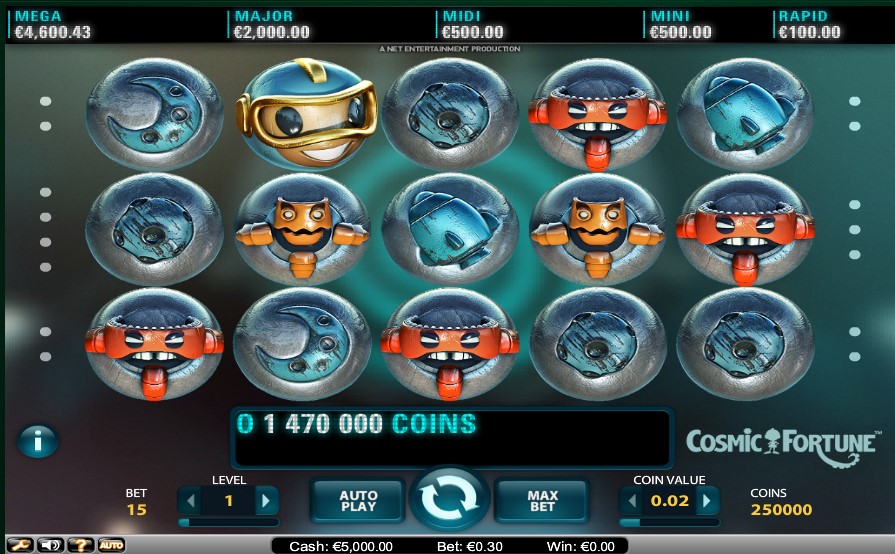 Play for real and get $6000 at Super Slots Casino!

Cosmic Fortune is a progressive pokie with five different jackpots. The game has a space theme and a totally outstanding bonus feature where a rocket drops marbles into collector cups and you get the chance to win some coins or hit a mega jackpot. The game engine is based on the NetEnt’s branded Avalanche design where symbols fall into the screen instead of spinning. Cosmic Fortune has a free spin bonus and a wild symbol, which is going to ramp up the excitement while waiting to win a progressive jackpot.

At first glance, the symbols seem strange and far from the deep space theme but on giving it a closer look you will see that every symbol is made of a stone or metal ball with some pictures drawn on them, for example, a rocket, a robot’s head or an asteroid. There are 15 fixed paylines, 7 regular symbols and 2 feature symbols in the pokie. Barring its uncommon graphic design, the pokie utilizes a traditional left-to-right model and pays out wins as per the paytable when three or more identical symbols appear on a payline. In Cosmic Fortune, bet sizes vary between $0.30 and $75. The top three payouts in the pokie are $7500, $5000 and $2500 – all for five of a kind.

The same Avalanche method is used in Gonzo’s Quest, Fruit Case and some other pokies from Net Entertainment. When you bet and click Spin in any pokie, the currently visible symbols need to give place to a new set of symbols. This is mostly done by simulating the spin of pokie’s columns (reels). In Cosmic Fortune, symbols do not spin – instead, they just fall down leaving the screen and 15 new symbols fall from above the top border, in a 5×3 grid. Another feature of the Avalanche is that the player can enjoy multiple consecutive winnings inside one round. When a winning combination is formed, the symbols comprising it disappear and new symbols fall down in an avalanche manner. If the new “wave” of symbols results in a win, the process keeps on until finally an avalanche brings no winning combinations, at which point the player should bet again to start a new paid round.

Free falls and a bonus game

For the same reason as above, the pokie has free falls instead of more traditional free spins. When three lightning bolts on a bronze ball land in any position, you are awarded 10 free falls. During free falls, every contributing symbol adds to a marble counter. And at the end of free falls, the collected marbles are transferred to the next bonus game. The bonus feature succeeding free falls is designed as an old video console game. The marbles that you have collected during free falls are dropped by an aircraft and randomly land on one of five collectors. Four collectors provide winning of 5, 10 or 15 coins for each marble, while the Jackpot Collector Cup is going to unlock a Jackpot Game if three marbles get inside it.

How to win the progressive jackpots

Note: No official information from the developer is available whether a bet size correlates to the probability of winning any of the five pokie progressives.

The pokie has five jackpots. Rapid and Mini are fixed at $100 and $500, while Midi, Major and Mega are local progressive jackpots. This means that amounts of the last three jackpots vary across casinos because they are accumulated by gamers of each specific online casino, not the entire casino network. Mega, the highest progressive, is won about every 1 month and its average win exceeds $80,000. A jackpot game may become available after free falls, provided three marbles have dropped into the Jackpot Collector Cup.

At the beginning of a jackpot game, you are given 50 marbles. And again, they are thrown onto the screen and land randomly in any of the five jackpot bowls titled as per jackpot types, or in coin collectors. If three marbles occur in the same jackpot bowl, you win a relevant jackpot.

Cosmic Fortune is a 5-reel 15-payline progressive video pokie where jackpots are hit in an unusual manner, by playing an arcade-style bonus game. The game is based on an Avalanche presentation of symbols developed by NetEnt.