Creature from the Black Lagoon POKIE 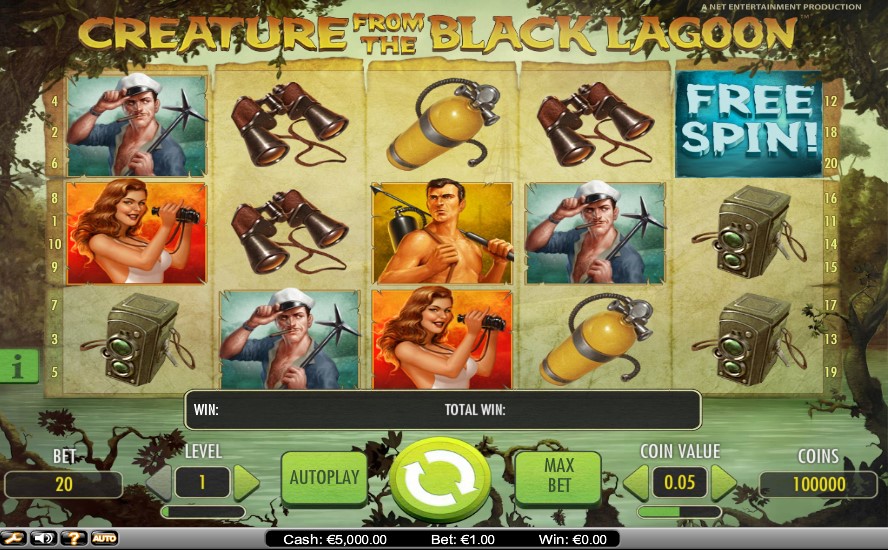 The pokie is based on the same-name monster film released in 1954. The pokie symbols are intentionally designed in bleak colors as if taken straight from the classic horror film. When playing the game, you will benefit from a substitution symbol, respins and an arresting free spin feature where you are to kill the creature, collect target symbols and activate additional Spreading Wilds that will ramp up your winnings. Creature from the Black Lagoon gives away the maximum of $3750 per combination in base game. In a nutshell, you are going to duly appreciate the game if you like film-based pokies.

The pokie has 5 reels and 20 paylines. The background picture and symbols fit the theme perfectly and take you to the filming locations, somewhere in the Amazonian jungle. Symbols are drawn as if glued on old faded paper, which adds to the mid-50s atmosphere of the pokie. The paytable is very easy because all winning combos begin with 3 identical symbols. The set of symbols includes four low-paying things like a knife (x100), a radio transmitter (x100), a diving cylinder (x125) and a binocular (x125). High-paying symbols comprise main characters of the film like Lucas (x400), Carl (x500), David (x600) and beautiful Kay (x750).

The pokie logo on a green background is a wildcard. It can appear in any position to substitute for regular symbols. The wild in the pokie acts as a sticky symbol. Whether it creates a combination or not, the wild gets stuck in place, while other symbols have one respin for a chance to form a new combination. If another wild emerges after a respin, you are awarded one more respin. The feature keeps on running until no new wilds land after a subsequent respin.

This part of the game activates when 3 or more bonus symbols appear in any position. You receive 10, 15 or 20 free spins, depending on the number of the triggering scatters. During free spins, watch out for a target that randomly occurs on reel 5, and it will change dramatically the gameplay. Once the target symbol lands, a horrible creature materializes to the right of the reels and gets hit. There is also a health bar that shows the creature’s health. As you might have guessed, your task is to kill the monster before free spins come to an end. If the monster was shot:

The scope of features in the pokie is modest as compared to many other games from Net Entertainment but there are two undeniable advantages: the pokie is inspired by a classic U.S. film and has a packed free spin bonus with three variants of a wild symbol.