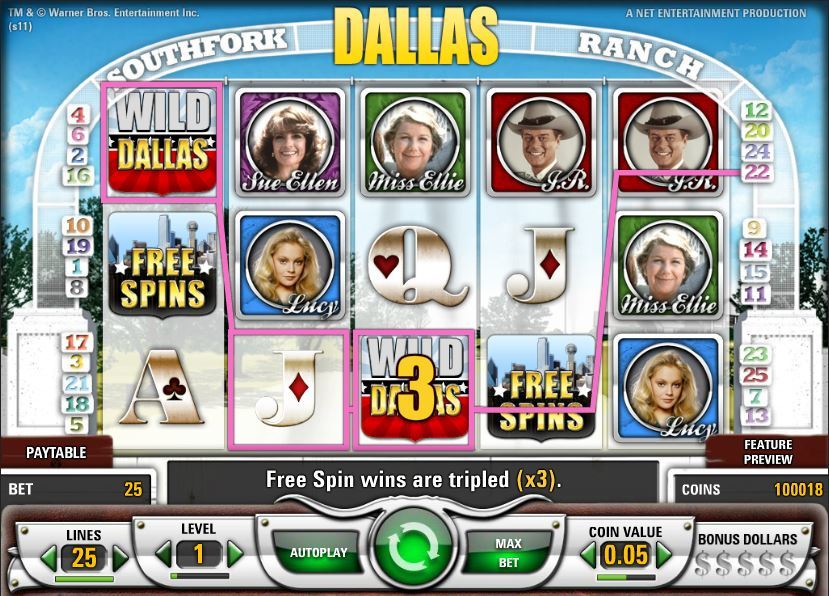 This 5-reel 15-payline pokie is based on the same-name soap opera that debuted in 1978 and ran for about 13 years. The TV series shows the Ewings family who own a big oil producing company in Texas and live at the Southfork Ranch where the story begins. The pokie is interesting thanks to an enticing bonus feature where you are to invest money into oil wells, win coins and big multipliers. Playing the game, you will relive the uneasy twists and turns of the Ewing family and enjoy true quality delivered by Net Entertainment, the famous pokie vendor.

Dallas is designed to remind gamblers of the series because half of its symbols display the main actors including Lucy, Jock, Miss Ellie, Sue Ellen and J.R. Ewing. The other symbols are J, Q, K and A, which are low-ranking symbols paying x3 to x100 for five of a kind. The semi-transparent reels are set against the landscape of the Southfork Ranch where most episodes were shot. When it comes to other design aspects, the pokie has the same interface and payline system as many other 5-reel games. To get a win, three, four or five like symbols must align on an active payline left to right.

The top three jackpots produced by regular (non-feature) symbols are $3000, $2000 and $1500. This seems to be far from big prizes but Dallas falls under the group of low-volatile games – ones that pay out often but in smaller amounts. So if you want to see your coin balance fluctuating on almost every spin, try this pokie from NetEnt. Bet limits in Dallas are $0.25 and $125 per spin. The betting amounts are adjusted by setting your preferred coin value and the number of coins per line (known as Level in NetEnt’s pokies).

The Dallas Wild symbol is self-explanatory. This is a substitute for all symbols except for scatters. It does not multiply payouts and has no additional perks tied to it but its key advantage over other symbols is its supreme payout ability. Even four of them pay out $10,000 at max – this is more than other normal symbols do in the pokie. And five wilds stopped on an active line award a huge $50,000, provided you have wagered the maximum acceptable stake.

You will also benefit from generous free spins if three or more Dallas’s iconic skylines land in any position. Free spins run with all winnings increased by x3. Moreover, the number of free spins varies from 10 to 25 subject to the number of scatters that have triggered the feature. Before free spins kick off, you get an instant award equal to x2, x4, x25 or x100 times the total bet. “All that matters is winning,” John Ross Ewing believed, so do not hesitate to bet as much as reasonably possible in order to hit scatters and activate a very profitable free spin feature.

This is another highlight of the game and it is triggered in an unusual manner. A golden dollar sign can sometimes appear on the screen. It creates no combinations but each of these symbols adds to the dollar counter. Once five of them are collected during your current session, the Oil Field round gets underway. On a new game screen, you will see five oil wells with metering devices on each. Pick a well to invest your dollars in and collect the income. Each well awards a different range of coin amounts so if you are not satisfied with your first choice, you can try another oil well. The number of dollars injected into the well determines a multiplier applied to your coin wins. The maximum profit is 5000 coins (1000 coins multiplied by x5) or $25,000 if you play at max.

Dallas is a 5-reel pokie based on a popular series aired in the US. It captures the atmosphere of the TV soap opera very well and features a wild, scatter wins, free spins and a highly lucrative bonus game where you are to gain profits from oil well pumps.