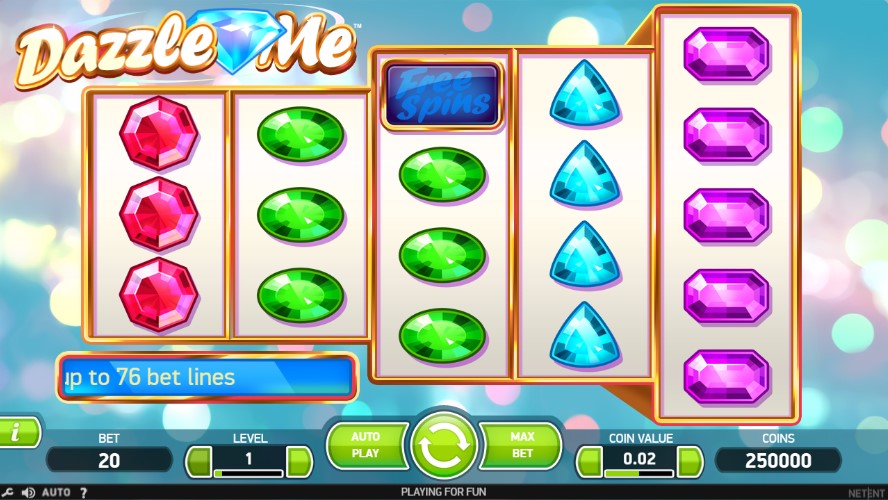 NetEnt have released this 5-reel video pokie to provide gamers with truly unforgettable experience with gem symbols and Dazzling Wild Reels that will lead to large winnings. The remarkable configuration of reels will catch your eye immediately upon entering the game, and once you have triggered free spins, get ready to see your bankroll grow courtesy of the Linked Reels feature that will make the reels glister with high-paying gems. Dazzle Me is distinct from traditional 5×3 pokies and will be well received by online casino fans who prefer off-beat pokies with exciting features.

Let’s start off with the layout used in the pokie. It has a very rare funnel-shaped set of reels that have the following scheme: 3x3x4x4x5. Winning combos must begin with the leftmost reel and run to the right on contiguous reels. There are 76 paylines that are always in play and bet sizes vary between $0.20 and $200 a spin. The pokie has other usual things such as advanced Autoplay settings and the Max Bet button.

The design in this pokie clones retro-style slot machines – the symbols lack detail and sophistication, and the background layer is just a bright faded picture with blurry light. The six regular symbols are a triangular blue gem, a green gem, a pink gem and a red gem. These are low-ranking symbols with payouts between x3 and x30. Bells and sevens are high-ranking symbols with their payouts being x100 and x200 for five of a kind. In money terms, the top wins for these two symbols are $1000 and $2000 when wagering the maximum 200-dollar bet per spin. The prominent nature of the reel arrangement makes it highly probable that any single spin will end in numerous combinations at a time, that’s not to mention its brilliant bonus features aimed at giving you incredibly big cash prizes.

The gameplay could have been a little boring if not for the fascinating Dazzling Wilds. These are in fact “stacked wilds” that can appear on the screen and turn 1 to 5 random reels into wilds. On the negative side, wilds do not complete combinations in their own right but activation of this feature can cause your coin balance to increase sharply.

A blue Free Spins tablet is a scatter symbol that triggers 8, 12 or 16 free spins if 3, 4 or 5 land anywhere in base game. At the beginning of each free spin, two adjacent reels (1 and 2 or 3 and 4) become linked to each other. This means symbols on the first affected reel will be the same as symbols on the second. In other words, both reels will be exact copies of one another. This feature acts like a lottery – you can never forecast whether the next free spin is going to bring you thousands of dollars or nothing.

Dazzle Me has an extraordinary reel layout and two rarely used features such as Dazzling Wild Reels and Linked Reels. Due to these special additions to the game mechanics, the pokie boasts of the possibility to win very big sums.