Devil’s Delight is a 5-reel 20-payline pokie that portrays the afterlife theme in a funny and ironic way. The pokie shows different characters and items that relate to the realm of the devil. Instead of showing the place where sinners are in everlasting imprisonment, Devil’s Delight depicts everything jokingly and cheerfully. The pokie has a unique bonus game where you are to assign sins to each soul. In addition to all this glory, you will enjoy a special free spin mode that gets cast as Sin Spins and features its own paytable with huge prizes up to $25,000. This is another high-quality game from Net Entertainment that always release products that are interesting and lots of fun. 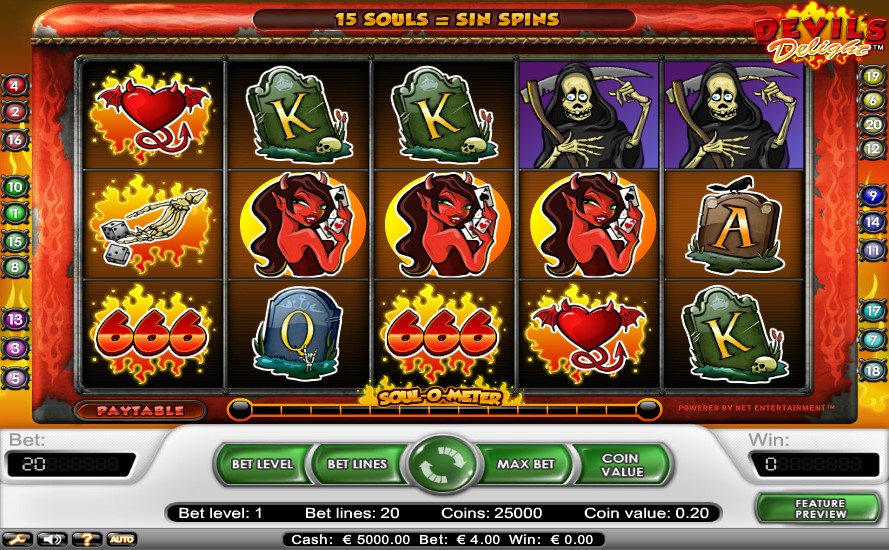 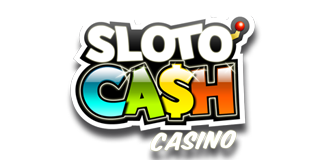 The reels, set against fire flames, are full of symbols that are commonly associated with the underworld. First off, playing card icons Q, K and A are designed as gravestones with some funny detail such as a lonely crow sitting on the top of “A” stone or a skeleton’s arm sticking out of the ground and showing a popular rock-concert two-finger gesture. These are low-ranking symbols with x3 to x75 payouts. Another group of symbols includes a deadman’s hand throwing dice, a red heart with horns, winglets and long tail, and a blazing 666 sign. These symbols pay out x7 to x150 for three, four and five of a kind.

Finally, you have four high-paying pictures that create combos if two or more appear. A big cauldron boiling and bubbling on fire awards up to $5000 at max. If you spin in five little devils carrying a pitchfork, they will pay you $7500. Five purple devils cooking a sausage on a fire award $10,000. And the top prize worth $20,000 is yours after five seductive she-devils appear on a payline.

An impressive devil wearing an expensive suit and smoking a cigar is a wild. Only reels 2, 3 and 4 are allotted for this special symbol. When the devil appears on any of these reels, it becomes an expanding wild and covers the entire reel for more winning combinations.

Under the reels, you can always see a Soul-o-meter bar divided into 15 equal-sized sections that are gradually filled in on completion of a bonus game. When the indicator is fully illuminated, you get access to super enticing Sin Spins where you can really score big. Souls are collected in a bonus game that you enter by hitting three Reaper symbols on reels 3, 4 and 5.

The bonus game takes you to a street where 5 people can be seen: a businessman talking on the phone, a boy drawing a graffiti on a wall, a blind old woman on a roadway pushing a walking frame, a postman boy and a chubby senior man. On the left-hand side there are five sins such as greed, gluttony, lust, sloth and wrath. Your task is to drag and drop a sin to each of the five characters. If you have made a right choice, the related character suffers an accident and you collect his or her soul. Each soul you have earned pays a random cash prize.

After you have gathered 15 souls, 10 Sin Spins are awarded. It is a little challenging to get all the 15 souls during one game session but the pokie saves your current progress for 48 hours, so you can enter the game again within that timeframe and see the Soul-o-meter showing the number of souls collected before you left off last time. Sin Spins are in fact normal free spins but they run with brand new symbols that depict seven sins. The payouts are decided in a usual manner; you have to get two/three or more of the same Sins on an active payline. Awards are a shade better than a normal gameplay and you can win up to $25,000 at the maximum bet. After the Sin Spins feature is over, the Soul-o-meter bar is reset to zero.

A burning red pentagram is a scatter, with three of them in any position activating 7 to 17 free spins awarded at random. All free spin wins are multiplied by x1 to x5, which is also a random value. When inside the feature, two or more scatters on the reels give you one more free spin.

Devil’s Delight is a 5-reel 20-payline pokie that has a serious theme presented in a funny way. In the pokie, devils are not scary but good-looking and rather adorable to some extent. The maximum cash prize is $25,000. Features include free spins, Sin Spins, expanding wilds and a quirky bonus game.