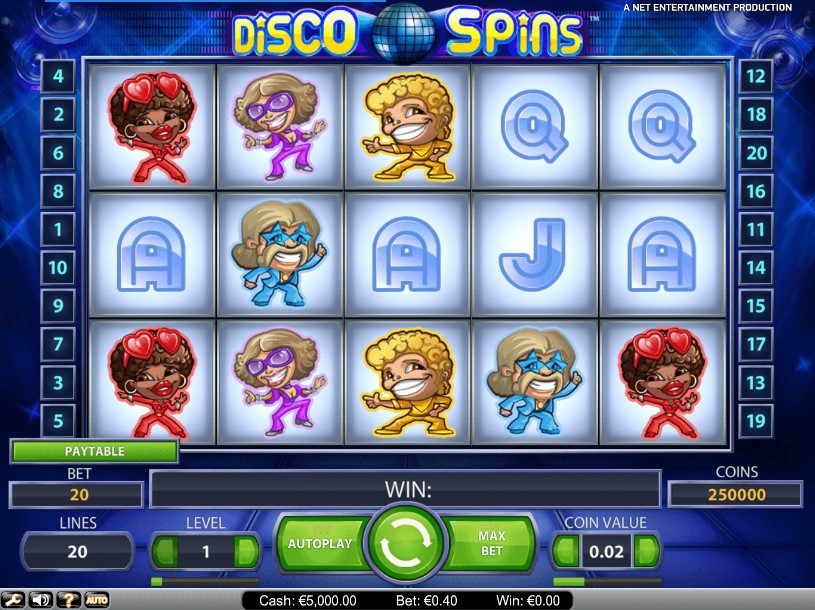 Disco Spins is a music blast from the past that takes you back to the 80s. Multicolored flashing tiles on the dance floor, glittering disco balls and greatest hits of the 80s come to your memory when you spin the reels of this festive 5-reel pokie. What is special about the game is the number of wild symbols – there are as many as five of them! Besides, you are given the freedom to choose Disco Spins or common free spins when it comes to the selection. This game brings some nostalgia for 1980s, the golden age of dance-pop, new wave, hip hop and rock music.

The pokie has 5 reels and 20 fixed paylines and the reels are placed against a deep blue background with disco head speakers and some acoustic level indicators that are often found on a DJ’s controller. All of these create the atmosphere of being at a night out. Sadly, playing card symbols come into the picture; however, they are reasonably designed to fit the stylistic of the game. The J–A cards pay x5 to x100, so they are low-ranking icons, as the case is in many other pokies out there.

Other regular symbols consist of five disco dancers who wear each costumes of five different colors: blue, green, purple, yellow and red. This color distinction is important for the reasons described in the Dance Floor Wild section below. In the base game, the top three payouts for the character symbols are $10 000, $5000 and $2000 for five of a kind. For detail, see the pokie’s paytable. Bet sizes are flexible enough to be affordable for low-rollers and are reasonably high to attract high-rollers. Changing a coin value ($0.01 to $1) and the number of coins per line (1 to 10), you can wager between $0.20 and $200 per round.

Not many pokies miss out on wild symbols and wilds are typically more or less straightforward. In Disco Spins, there are no fixed wilds – instead, the five disco dancers, which are regular symbols for most of the time, can in some circumstances become wild. This happens as follows: Each spin about half of the symbol positions appear colored in blue, green, purple, yellow or red background. If the color of the symbol position matches the color of the character, that symbol automatically becomes wild. Simple as that. As a result, chances are one or more wild substitutes will be visible on the screen after the reels stop.

A blue disco ball is a scatter symbol that is reserved for the third, fourth and fifth reel only. When 3 scatters appear simultaneously, you are invited to choose to play either normal free spins or a Disco Spin mode. Choosing the former awards you 15 free spins with all wins tripled during the feature. If you want more fun and higher chances to win bigger than usual, pick the Disco Spin option. You are then provided with 10 special free spins where only dancer symbols appear – this automatically chops away low-paying combinations.

Disco Spins is a music-themed pokie with 5 reels, 20 paylines and a set of interesting features including a free spin selection and five different wilds. The maximum payout in the pokie is a massive $10,000.