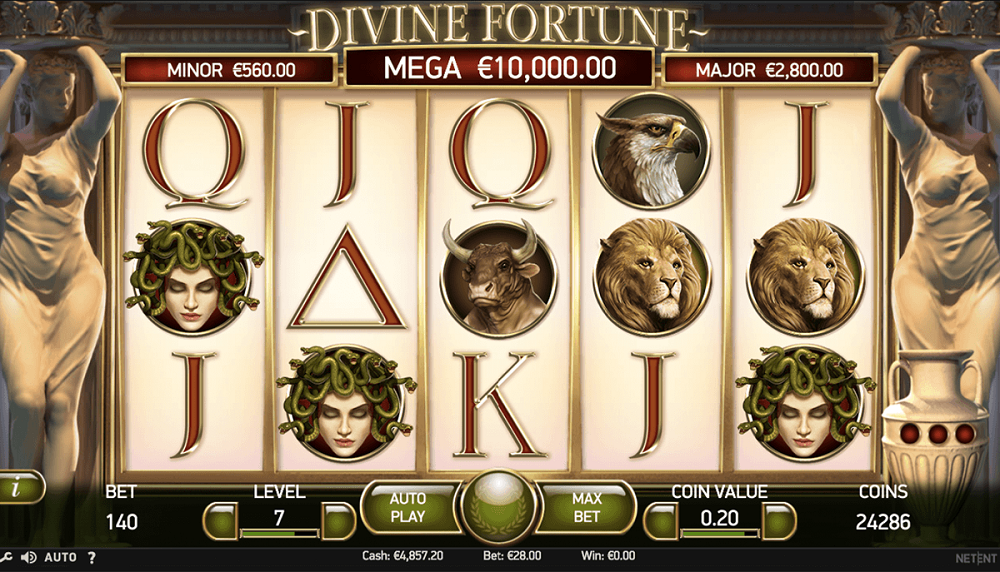 Divine Fortune is so far the latest jackpot game from Net Entertainment and one of the most popular ones for today. The secret of its success is in frequent jackpot hits. Since its release at the beginning of 2017, over 160 gamblers became lucky winners of huge amounts, with an average recorded win of some €125,000. In other aspects, the pokie has vivid graphics, though a bit simplistic, and a pronounced Ancient Greece theme. Highly repetitive re-spins are the most prominent feature in Divine Fortune, and due to Falling Wilds these re-spins can repeat almost endlessly.

The pokie looks spacious because it is really without decorative frills. The reels are framed by two female statues supporting some intricate architectural elements above their heads. The symbols are also related to the ancient times when Greek myths were created but it’s not clear how an eagle, bull and lion are associated with any mythological figures – maybe, the lion alludes to the Nemean lion slayed by Heracles, the eagle is an emblem of Zeus, the supreme deity in Greek mythology, and the bull’s head is none other than Minotaur. Anyway, the top-paying regular symbol that awards $3000 is easily recognizable – this is Medusa, a hyped up image in modern popular culture. The next down award is $2000 for five Lions.

Greek legends say that a water spring comes out everywhere Pegasus stamps on the earth. Pegasus, a winged horse, is a wild symbol that triggers a feature when landed on the screen. When it appears, all winning combos are awarded, the wild shifts down one position and the reels re-spin once. If the same Pegasus is still on the reels, you get another re-spin and the wild moves one position down again. The feature continues until the last wild disappears from the bottom row of the reels.

If a new wild symbol lands behind the wild that shifts from the upper row, the affected Pegasus stands on his hind legs and becomes an expanding wild. All wins are awarded for that winning spin and then the expanding wild begins to move down one position with each re-spin.

Wilds are beneficial symbols in many pokies. In Divine Fortune, they are further complemented by their gradual disappearance from the screen and re-spins. This “wild plus re-spins” duet can generate excellent winnings.

The symbol depicting a Zeus’s hand holding a thunderbolt is a scatter symbol meaning it can appear in any position to trigger a feature. In this pokie, the feature is represented by free spins. You need to get 3, 4 or 5 scatters in order to receive 5, 8 or 12 free spins. The amount of bonus spins may seem low, but given that re-spins are also activated under the same rules during free spins, this amount is more than ample to grab a generous win. Furthermore, every wild landed during free spins becomes an expanding wild that will even more contribute to your wins.

How to win a jackpot

The pokie has three jackpots: two of them, Minor and Major, are fixed and Mega is progressive. The Minor jackpot is worth x20 the total bet of the triggering round, and the Major jackpot awards x100 times the total bet. Mega is the most covetable jackpot of the three because it seeds at €10,000 and is hit about every 4 days. The biggest win of €640,721 was recorded in January 2017. The progressive jackpot amount is local, which means its amount varies across online casinos that currently offer this game, and it is always denominated in euros. If you are playing with AUD, the amount won will be converted to that currency and added to your balance.

To win any of the three jackpots, you first have to hit three coin symbols on the reels and enter a jackpot bonus game. You will then see a standard 5×3 gaming field with three coins randomly positioned on it. You are awarded 3 spins that can bring more coins on the field. If a spin was successful and one or more coins were added to the reels, you are granted one more spin. If at the end of the bonus feature, one row will be covered with coins, you win a Minor jackpot. If two rows are full of coins, you win a Major jackpot. Finally, the full screen covered with coins will bring you the longed-for Mega jackpot. Access to a jackpot bonus game is granted even to penny bettors but there is a direct correlation of jackpot winning chances with a bet size – the more you wager, the higher the probability to hit Mega.

Divine Fortune is NetEnt’s latest progressive pokie with three jackpots that are available via a bonus game. The most prominent features in the pokie are Falling Wilds and re-spins. A free spins round is also present.