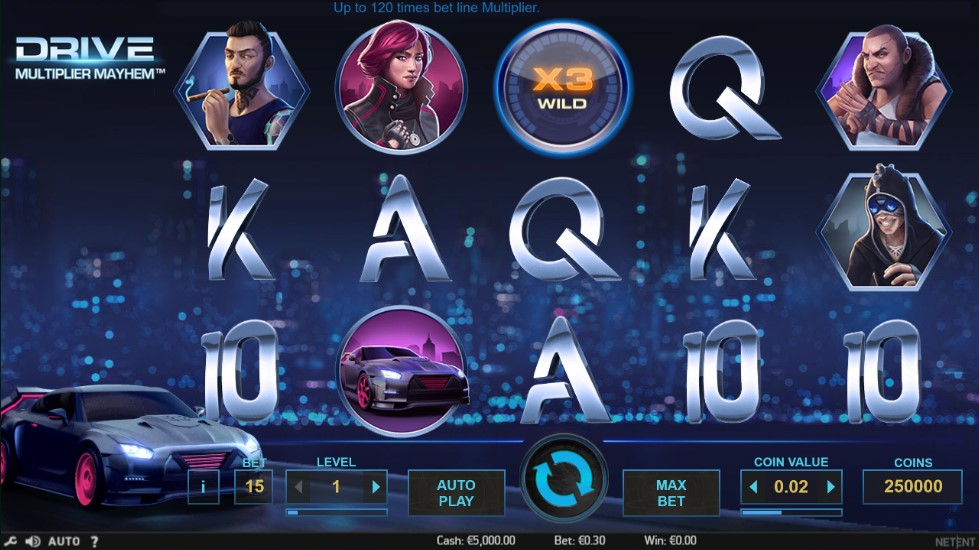 This energetic 5-reel video pokie was created especially for those who love sports cars, high speeds and an adrenaline rush. You are going to challenge four opponents to a drag race and prove you are the best. While playing the pokie, you enjoy great multiplier boosters up to x5 and have the chance to enter free spins where Nitro symbols will increase your car performance and let you take stunning cash prizes.

Visual design of the Drive: Multiplier Mayhem pokie and its background image resembles much car racing video games released for PC or PlayStation. A slightly blurred cityscape at the backstage moves slowly as if you are driving your auto right now. The symbols are portrayed on fully transparent reels so that you can enjoy the night city view all the time.

The major feature of the base game is a Multiplier Wild designed as a speed or rpm gauge. Multiplier Wilds land randomly on all reels and bear the same multiplier as the reel they appear on. If, for example, a Multiplier Wild pops up on the fourth reel, the winnings (if any) where the wild participates are multiplied by x4. Sometimes, two wilds can appear on the same bet line, in which case the multiplier values featured on these wilds are multiplied. Suppose, you get the wilds on reels 3 and 4, so the ultimate multiplier applied to your winnings will be x12. As you can see, this feature has lots of potential and can produce huge wins.

NetEnt’s pokies tend to have fixed paylines – 15 in the reviewed game. Coin denominations are numerous enough to allow low-rollers to wager no more than $0.15 per spin. Gamblers who like higher bet amounts, can increase a Bet Level and Coin Value to wager up to $75 per spin. Payouts for regular symbols are not big – playing cards give away x5 to x30 times a line bet, while other symbols pay x10 to x150 or up to $750 at max. This is because a wild symbol provides huge multipliers and perhaps contributes to the bigger share of total expected winnings in the pokie.

Free spins take the form of four-level races that are unlocked when you hit three scatters on reels 2, 3 and 4. To the left of the reels is a Nitro meter with empty indicators that are filled in one by one every time you land a Nitro symbol during free spins. You are initially awarded 10 free spins and your first opponent in the race is Twitch.

To progress to the second level and throw down a challenge to Hamaki, you need to collect three Nitro symbols, at which point you are awarded 4 extra free spins and an overlay multiplier wild is added to the game. Overlay wilds randomly land in any position on each spin and serve as substitutes for other symbols. Upon collecting 3 Nitro symbols again, the race advances to the third level with a new opponent, Bruiser. Additional overlay wilds are given to you along with another overlay multiplier wild. If you again get 3 Nitro symbols, you continue to the fourth, final level. Consequently, free spins can be very profitable thanks to overlay multiplier wilds and you can generate here up to 750,000 coins at best.

Drive: Multiplier Mayhem is a 5-reel video pokie with spectacular graphics and a car racing theme. Features include a multiplier wild x1 to x5 and multi-leveled free spins with extra overlay wilds. The maximum potential prize amounts to $375,000 in free spins and the top regular prize is $750.