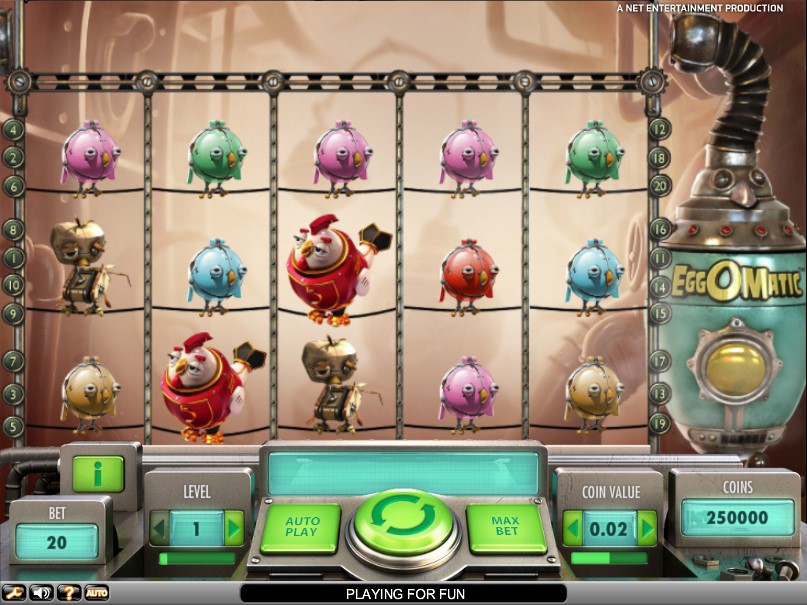 The pokie welcomes you to the egg factory of the future where living hens are replaced with robot layers that produce four kinds of yummy eggs. Just catch these eggs falling from the conveyor belt above the reels and get up to 50 free spins, numerous coins, Spreading Wild or a surprise egg. This 5-reel 20-payline pokie impresses with its creativity and excellent graphic design. Once upon a time in the future, a smart robot rooster invented a machine for laying metal eggs but something went wrong. The launch button broke down and the machine commenced laying eggs without interruption. This what you can conclude from watching a short video intro that you can skip.

All the 15 symbols aligned on a 5×3 field are metal chickens or hens that perch on three wires, five birds on each. Bet sizes vary between $0.20 and $200, which makes the pokie suitable for wide audiences. Winning combinations are completed in a standard way, from left to right, and you need at least three identical symbols to receive a cash prize.

Low-ranking symbols are orange, blue, green, pink and red metal chickens, awarding x5 to x75. High-ranking symbols are portrayed by different hens that pay out x10 to x1000. That said, the top three prizes in EggOMatic are $10,000 (five red hens), $7000 (five hens with blue hearts) and $5000 (green robot hens). The pokie is rather a medium-volatile game with mostly low and middle-sized winnings.

A wild symbol is represented by a rooster that substitutes for other symbol and is a driving force of the pokie because it is essential to the EggOMatic feature. The wild rooster cannot create its own winning combinations but its role can hardly be overestimated.

The pokie is set at a big factory pictured behind the reels. To the right of the reels, there is a strange device consisting of a massive tank with a large-diameter pipe at the top. During the base game, the machine regularly releases one of four kinds of eggs that are placed on the conveyor belt above the reels. The egg starts from reel 5 and moves one position to the left with each following spin until it reaches the left edge of the reel field and disappears. The feature egg moving to the left on the conveyor belt is activated when a wild rooster appears on the same reel as the egg. The following features are awarded when any of the four eggs appears directly above the wild:

EggOMatic is a 5-reel pokie centered around a single feature that leads to free spins, cash awards or Spreading Wilds. The maximum prize in a regular play amounts to $10,000 but the bonus feature can give away up to $25,000. Due to the awesome artwork, the pokie can be recommended to everyone who likes 3D graphics and creative feature solutions.