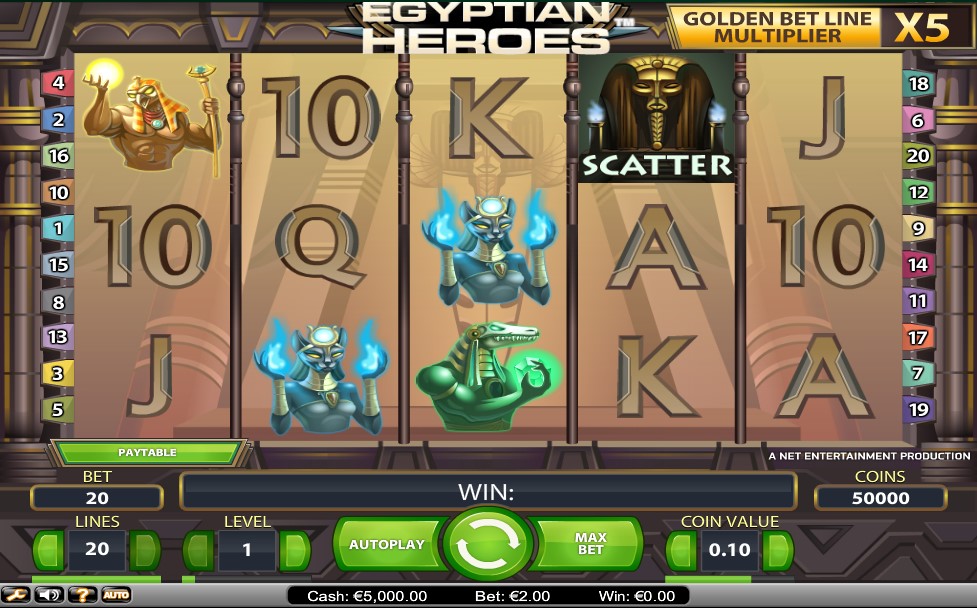 Many top companies that develop pokies for online casinos often use Egyptian mythology or history as a source of inspiration for their games. As the evidence from practice indicates, most pokies on that theme are almost carbon copies of each other – they feature stereotypical ankhs, scarabs and Cleopatras. As against those copycat Egyptian pokies, the reviewed game is a jolt of fresh air in the category because this NetEnt’s title is completely unconventional when it comes to symbols and features. It will just suffice to mention the Golden Bet Line solution that is really unique in every respect.

On loading the game, you will see it has 5 reels and 20 non-fixed paylines, so a total bet can start from one penny if you opt to play with only one bet line. The ceiling stake is $100 with all lines in play. The background behind the reels is nothing exceptional – there are columns and wall paintings or carvings, which add diversity to the theme. Low-paying symbols are playing cards, which is a kind of tribute to the tradition. These symbols produce winnings from x2 to x125 a line bet.

High-paying symbols are taken from the pantheon of Egyptian gods and all of them have a unique magic power like in fantasy films. Sobek, a deity with a crocodile head, holds a big shining emerald in his hand and pays $2500 at max. A god of war with a magic scepter and knife awards up to $5000. A goddess clasping a purple magic orb pays out $7500. Bastet, a cat-headed goddess of warfare, is able to generate blue fireballs in her palms and throw them at enemies – the max award that five of them produce is $10,000. Finally, Horus who was one of the most powerful gods in Egypt, gives away the pokie’s top prize of $20,000 if five of them hit the screen. The remarkable thing about god symbols is that even two of them constitute a win.

The paylines are not visible when the reels are spinning or resting after a no-win round. If the rotation of the reels results in a cash prize, the contributing paylines are highlighted in a particular color. This pokie has a unique Golden Bet Line feature. At the beginning of each spin, a random payline is highlighted in a gold color and any win on that golden line is multiplied by x2, x3, x4 or x5. Imagine that five Horus gods occur on the golden line. Should it so happen, your prize will total an immense $100,000!

A red pyramid, which looks more like a Maya art piece, is a wild. Only reels 2, 3 and 4 are reserved for wilds and when a pyramid does land anywhere on these reels, it expands vertically with stunning animations and covers the entire reel. This is a very lucrative symbol because it normally leads to numerous combinations being completed on a single spin. Expanding wilds are also active in free spins.

Once you get very lucky and no less than three scatters land in any position, you will see they are actually worth waiting for because scatters trigger 10, 15 or 20 free spins. Furthermore, the central reel will always host an expanding wild until the end of the feature, for a chance at bigger cash prizes.

Egyptian Heroes is a 5-reel 20-payline pokie with expanding wilds and free spins. During free spins, the whole reel 3 turns into wild for the duration of the feature. The max potential jackpot amounts to $100,000.