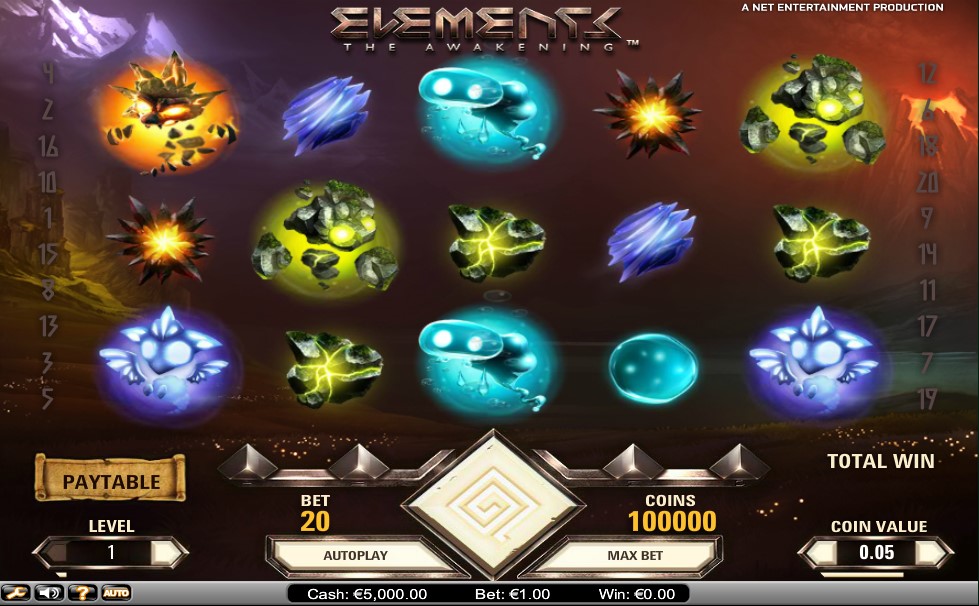 This is a 5-reel 20-payline pokie with superb design, magnificent animations and a unique theme that only vaguely resembles Evolution, another eye-popping pokie from Net Entertainment. Elements: The Awakening has a revolutionary Avalanche feature that was first introduced in Gonzo’s Quest, an extraordinary set of symbols and four free spins features that correspond to four classical elements. The symbols are depicted against a strange landscape of a young planet with erupting volcanoes, clouds of smoke and rocky cliffs. There’s no life on that planet yet, only fire, air, earth and water elements struggle for supremacy. The animations aplenty are worth playing the pokie just to see! Cool high-definition graphics accompany every moment of the play, from gorgeous win animations to bonus features.

There are eight regular symbols, two for each element. Low-paying symbols that award x3 to x100 show the “young” elements such as a water bubble, a wind blow, a piece of rock and a lava stone. High-paying symbols are represented by “adult” elements of water (x300), air (x500), earth (x750) and fire (x1500). If you have ever played some of NetEnt’s titles, you would recognize the developer’s staple Avalanche reels where symbols fall into place instead of spinning. When a winning combo is completed, the contributing symbols disappear, allowing the new ones to drop into vacant spaces. This can be a quite rewarding experience because a single paid game round can give you multiple wins. Below the reels is the Avalanche meter that counts consecutive avalanches until four of them are collected, at which point you get access to a certain free spin mode.

There are two adjustable options that affect a size bet. A coin denomination comes in values between $0.01 and $0.50, and a Bet Level can be changed from 1 to 10. Therefore, the minimum and maximum stakes in the pokie are $0.20 and $100 per spin.

You will never find the game boring because of its stunning features and Energy Meter is one of them. It is located within the Spin button and is divided into four areas, one for each element. Every avalanche fills in a corresponding colored section on the meter, depending on the element. After four successive avalanches, the meter is filled up completely, and the pokie triggers 10 free falls. The free falls mode you win depends on which symbols have prevailed in winning combinations during the four latest avalanches. The “free fall” term is used instead of a classic “free spins” because symbols really fall down instead of spinning, as described in the previous paragraph.

During free falls, a water storm wild appears on reels 2, 3 and 4. It then expands to cover the entire column.

Fire Storm Wilds land on reels 2, 3 and 4 only. They behave like forest fire, spreading in any direction with each subsequent free fall. When doing so, fire wilds transform the affected symbols into wild.

Two air storm wilds are placed in random positions at the beginning of free falls and remain on the screen for the duration of the Air Storm mode. After each fall, the wilds shift randomly to adjacent positions as if blown with the wind.

An earth wild remains on its initial position until included in a combination. Then it is removed from the reels and a new earth wild lands.

Elements: The Awakening is a true masterpiece from the famous provider of video pokies. It has a number of revolutionary features such as Energy Meter, and four free spin modes that add to the enjoyment and fun.