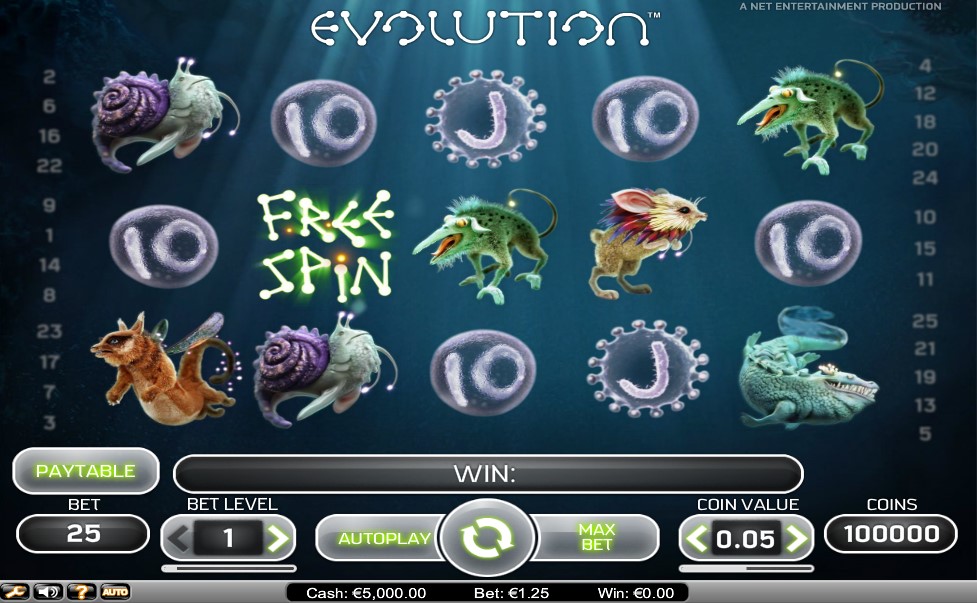 Scientists still argue on how life began on Earth. Some believe that living beings originated in the primordial soup, the others are sure that our planet was inseminated with alien biology. Whichever is true, Net Entertainment released this Evolution pokie to give its vision of the emergence of life. When playing the pokie, you will see the whims of evolution, get to know how a Bestia Dentum looked like and retrace the history from early viruses to the most complex organisms. The pokie has an outstanding Evolution feature where you advance through the symbol scale and win bigger with every spin.

The action of this 5-reel 25-payline pokie takes place in water where 15 waggling symbols are arranged in a 5×3 formation. The symbols relate to different living beings, and their payout capacities are directly proportional to their biological complexity. For example, the lowest-ranking symbol is displayed by a simple cell with number “10” inside. The next symbol up the payout ladder is a virus “J”, then comes a jellyfish-like creature with letter “Q” inside it. The same refers to K and A. The low-paying symbols certainly have more stops and you will see them creating combinations very often. The high-paying symbols are a kind of a snail named Albus Slugus (x150), a crocodile and snake hybrid Bestia Dentum (x175), a rat-like beastie with green fur (x200), a rabbit and otter hybrid Basilisk Pluma and a strange fox Draconius Rex with small wings (x500). The winged fox is the most lucrative symbol, five of them awarding the pokie’s second highest cash prize of $2500.

The word “Wild” is a wild, as you might guess. It appears everywhere, except for reel 1, to substitute for regular symbols. Wilds are not able to create combos by themselves and their role in the pokie is just to facilitate the creation of winning combinations.

Three or more Free Spin icons landing in any position trigger 10, 15 or 20 free spins. In addition to that, you receive an instant cash prize up to x100 times the total bet or $12,500 if playing at the maximum acceptable stake. Now you are to see the genesis of life. The background underwater picture visible in the base game will change to the earth of prehistoric times. If a free spin results in a combination, the symbols in that combo and all like symbols in other positions on the reels will evolve to the next level, for example, the Basilisk Pluma will transform into its higher neighboring symbol of Draconius Rex. This can lead to very high winnings as simple organisms evolve into more complex animals, and low-valued symbols are removed in the process.

This is an innovative pokie with wilds, free spins and a unique Evolution feature. The creatively designed symbols of imaginary extinct species bring fun and entertainment for hours, while high payouts provide rewarding adventures in ages past and gone.