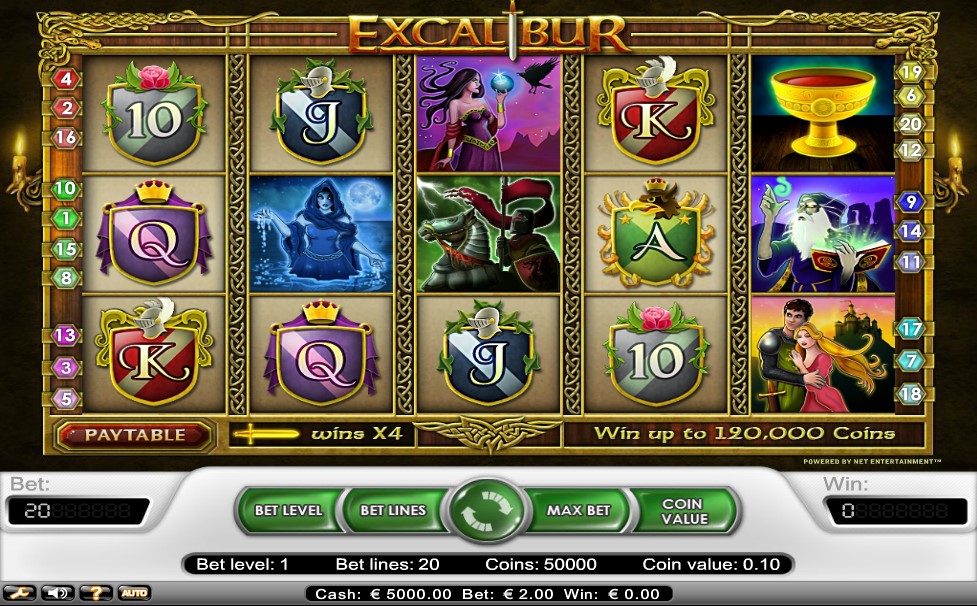 With the Excalibur pokie from NetEnt, you will travel back through time to see Arthur, a legendary king of Britain. The game slightly underperforms in graphic design but its potentially lucrative award of $40,000 is well worth giving it a try. Excalibur has a Golden Wild symbol that would quadruple your winnings, and the Holy Grail scatter that unlocks up to 30 free spins.

The pokie has 5 reels and 20 non-fixed paylines. On the reels, you will see a set of symbols that relate to the Arthurian legends theme, including a knight riding a horse ($800), a sorceress looking into a blue magic ball ($1000), Lady of the Lake ($1000), Sir Lancelot hugging Guinevere ($2000), Merlin ($2000) and King Arthur himself ($3000). All winning combinations must consist of three or more identical symbols to generate a paytable reward, except for King Arthur and 9s that require at least two symbols. All winning combos pay from the leftmost to rightmost reel.

Coin sizes in Excalibur range between $0.01 and $1, with up to 4 coins allowed per each line. Thus, the minimum and maximum stakes that the pokie accepts are $0.20 and $80, accordingly.

Most pokies feature one wild symbol and this is usually enough to provide you with enjoyable playing experience. The reviewed pokie benefits from two wild symbols, meaning you have a way more chances at hitting big prizes. Let’s first consider a regular wild depicted by Excalibur stuck in a stone. Only a man who is meant to find the Holy Grail can pull Excalibur out from the stone. If you want to be winner of the pokie’s highest jackpot, you need to hit five regular wilds on an active payline, at which point you get an instant $40,000 prize if playing at max. Moreover, the regular wild doubles the value of the combination where it substitutes.

Another wild is a Golden Excalibur symbol. It is less common on the reels but the golden sword augurs well for decent prizes. This extra wild symbol substitutes for regular pictures and multiplies payouts by x4. Let’s assume that you get four King Arthur symbols on an active line plus a golden wild on the same line. As a result, you are awarded $3000 times 4 = $12,000 for that combination.

The Holy Grail, a sacred Christian artifact that was allegedly used at the Last Supper, is an important item of the Arthurian legends. In this pokie, the golden Holy Grail is also the most important symbol since getting three, four or five of them in any position opens you the way to 10, 20 or 30 free spins. During free spins, the game is fully automatic and incurs no expenses for you. Furthermore, all wins generated in the feature are multiplied by x3. Just imagine playing 30 free rounds at a triple win multiplier! Before the feature gets underway, your coin balance at the online casino where you are playing Excalibur is increased by the amount equal to x2, x5, x25 or x500 times the total bet. So playing at max, you will win $40,000 for five scatters. One last thing, free spins can be retriggered if you again hit 3+ scatters during the feature.

Excalibur is a 5-reel 20-payline pokie with two wild symbols, scatter and up to 30 free spins with wins tripled. The maximum prize up for grabs reaches a stunning $40k for five wilds or five scatters.