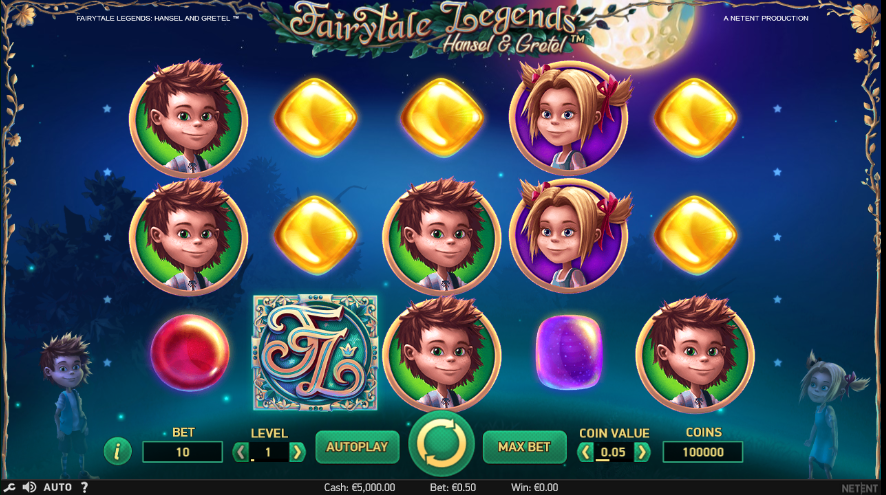 This miraculous, bright and captivating video pokie is inspired by Brothers Grimm’s fairy tale known as Hansel and Gretel. The story goes about a young brother and sister left in the forest and kidnapped by a witch. The pokie will attract you instantly as you begin to play because it has lots of interesting features that are fun, entertaining and lucrative. Three features are triggered at random and the other three bonus features are activated by bonus symbols.

The pokie transports you to the dreamland where two kids, Hansel and Gretel, are walking through the misty night woods, having escaped from the witch who wanted to eat them. But the smart kids outwitted the old hag and finally got home safe and sound. The pokie has 5 reels and as low as 10 paylines, which is somewhat uncommon for Net Entertainment’s titles, but thanks to the abundance of bonus features, you will take no note of the low number of paylines. In fact, this has no impact on the gameplay.

Stacked symbols are the most conspicuous aspect of the pokie that jumps out at you first. All regular and special symbols are grouped in stacks of three or more. Stacked symbols normally cover 1, 2 or 3 positions on the same reel, which increases winning chances. Oddly, there are only 7 regular symbols: Hansel, Gretel, the pokie’s logo and four candies of different colors. Bet sizes are extremely flexible and are suitable for low-rollers and high bettors alike. You can place just $0.10 and have all lines in play, or wager $200 per spin.

The paytable is surprisingly uniform across the symbol set. Candies pay x5, x10 and x40 for three, four or five of a kind. Hansel and Gretel award x10, x20 and x100 each, for three, four and five of a kind. The intricately drawn “FL” monogram is the top payer at x20, x60 and x400. If wagering the highest stake, you can grab up to $8000 in the pokie.

The wild symbol in the pokie is also stacked and is represented by a piece of road covered with red pebble – this supposedly alludes to white pebbles laid by Hansel when the family were walking into the woods to abandon the kids. Anyway, when the stacked wild appears, you are awarded one re-spin with the wild symbol kept in its position for that re-spin.

Three chest symbols stopped on the first, third and fifth reels activate one of the three bonus features determined randomly by the pokie software:

This is a feature-packed 5-reel pokie from NetEnt, based on the Hansel and Gretel fairy tale. The pokie has a bet range of $0.1–$200 per spin, six bonus features and the maximum jackpot prize of $8000.