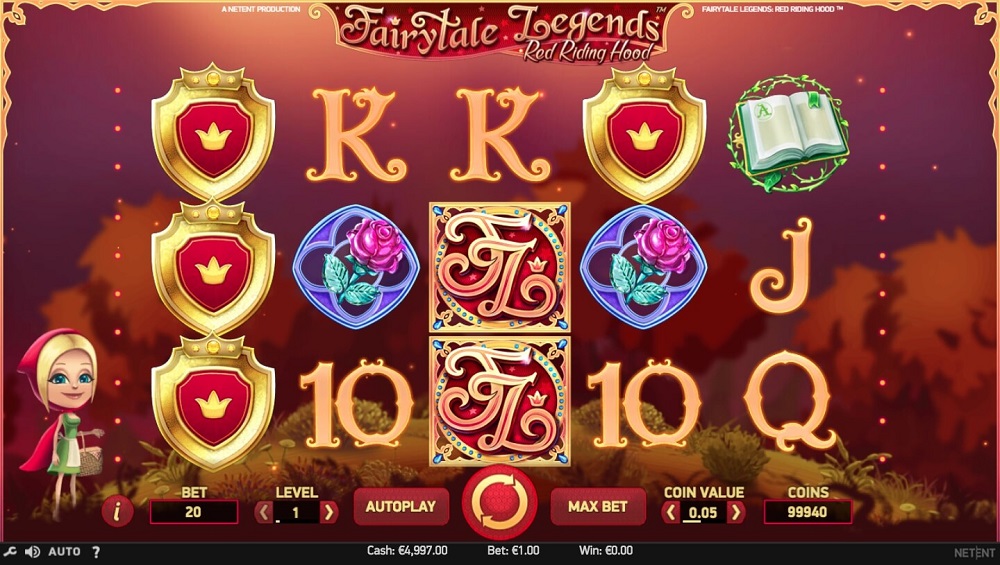 Join Red Riding Hood as she wanders through the woods to bring food in a basket to her sick granny. On your way to the granny’s hut, you can expect a lot of bonus features, including three random features, free spins, a board game-type Beware the Wolf bonus and a plethora of cash prizes. This 5-reel 20-payline pokie is full of nice surprises and looks like a fairy tale story abridged and adapted for online casinos by creative guys from Net Entertainment.

The reels of the pokie are depicted against the forest that moves continuously, while Red Riding Hood keeps to the left of the screen. This endlessly scrolling background looks awesome, just like in some video games where the environment moves, keeping the player at the same position. There are ten regular symbols on the reels, half of them are playing card values 10–A of golden color, and the other half relate to the theme such as an opened book, a rose, a key and so on. Tens, Jacks and other low symbols pay out x2 to x60, while high symbols award up to x400. Given that the bet sizes vary between $0.20 and $200 per spin, the top prize in the pokie is $400 if you play at the maximum stake.

Another staple aspect of the pokie is stacked symbols. Actually, all the symbols, both regular and special ones, land in groups of three, which creates opportunities for having the whole reel filled with the same symbol.

A smiling Red Riding Hood is a wild symbol that displays on reels 2, 3 and 4 only. When two of them land in any position, they get stuck to their positions and you earn one free re-spin. If one more wild lands as a result of the re-spin, you are awarded an extra re-spin.

The pokie has 3 random features that lend variety to the play and let you take down some coins.

Other features described in this paragraph are triggered when three Chest scatters become visible on reels 1, 3 and 5. You are then offered to pick one of the three chests that will reveal a certain bonus feature:

This video pokie has plenty of innovative and enticing bonuses, including three features generated at random, 10 free spins, bonus coin wins and an exciting mini game where you move around and win coin prizes. The best loot in the game is $40,000.