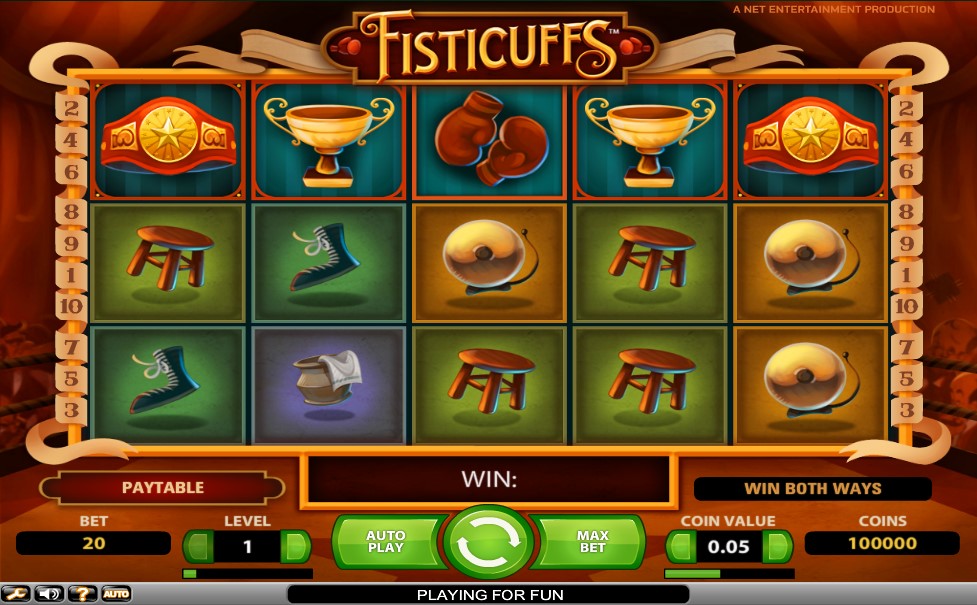 This funny Fisticuffs video pokie from Net Entertainment takes you to a boxing arena where the opponents exchange punches until one of them throws a knockout punch and brings you lots of wild symbols on the screen. The pokie offers many chances to receive decent wins thanks to the unique Win Both Ways model where combinations count in both directions. Add to that an exciting Boxing feature that generates many wild symbols and grants profitable re-spin with even more money.

Offering an eye-catching gameplay with excellent graphics and win animations, the pokie pays out excellent rewards thanks to the Win Both Ways system that is so popular with gamers. The pokie is packed with only 10 paylines but you can multiply it by 2 because winning combos pay from left to right as most pokies on the market, and from right to left. This maximizes the potential of the video pokie and produces payouts on almost each spin of the reels.

This time, NetEnt shunned the common aces, kings and other playing cards in favor of themed symbols and this really looks somewhat refreshing. The package of low-paying symbols consists of a bowl with water and a towel (x50), a retro-styled boxing shoe (x50), a wooden stool (x60) and a boxing bell (x60). High-ranking symbols are a pair of boxing gloves (x150), a golden trophy (x250) and a champion’s belt (x500). All regular symbols pay for three, or more, of a kind.

What happens when five identical symbols are built on a payline? Right, you get a payout according to the paytable multiplied by x2, as you might expect. Let us suppose that you hit five Bells exactly along a payline. This combination is worth 500 coins but you get two of this combinations: one goes from left to right and another runs in the opposite direction, from right to left, so you receive 500 x 2 = 1000 coins.

You have two options that you can change to your liking. A coin denomination is increased or decreased between $0.01 and $1 by using related selectors. The same refers to the number of coins per line – these values are changeable between 1 and 10. As the Win Both Ways model is always active, a bet starts at $0.20 (10 paylines times 2) and goes up to $200 per spin. Therefore, the top jackpot prizes in the pokie are $10,000 (five Belts), $5000 (five Gold Cups) and $3000 (five Pairs of Gloves).

A chunky boxer and a skinny boxer are special symbols that are the centerpiece of the pokie. A chunky boxer is the Straight Wild and his thin opponent is the Diagonal Wild. Both of them, taken separately, are standard wilds that substitute for all regular pics and they need to appear simultaneously to kick start a bonus feature.

The Straight Wild appears on the central reel only. If a Diagonal Wild lands on the same row as the chunky boxer, the latter punches his opponent to reel 1 or 5, turning the symbols between them into wild.

The Diagonal Wild appears on reels 2 and 4 only. If a Straight Wild lands diagonally to the thin boxer, the latter punches the Straight Wild, morphing the symbols below or above the big boxer into wild.

After either of the above events, you are awarded a re-spin during which all the wilds visible on the reels stay in place and then contribute to winning combinations after the re-spin finishes. Besides, stacked wilds can appear on reels 1 and 5 for that single re-spin.

Fisticuffs is an enticing, captivating and fun 5-reel pokie with two different wilds, stacked wilds, the Boxing feature and re-spins. The max prize in the game is $10,000. The pokie is highly recommended for all fans of interesting solutions, especially those who like tons of wild symbol action.