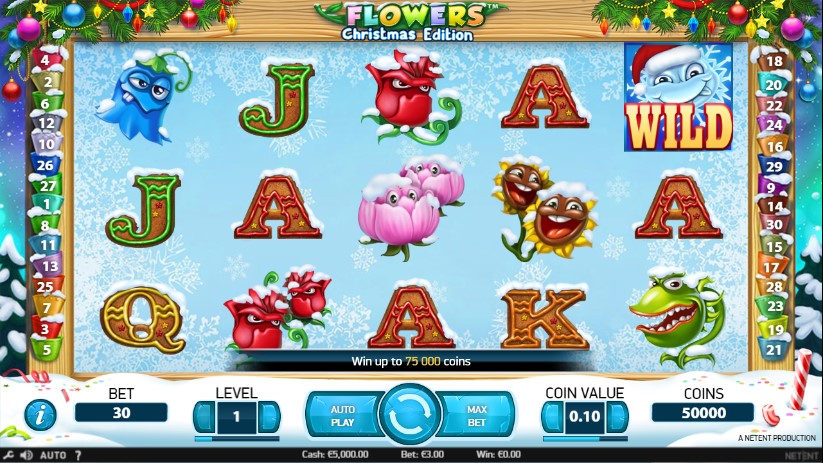 Nothing will get you in the holiday cheer better than a good game that would feature nice cash presents and exciting features. A few years after the release of the Flower pokie, Net Entertainment presented its winter-themed clone named Flowers: Christmas Edition. The pokie will invigorate you with familiar double symbols that count as two normal symbols, lavish free spin rounds and stacked wilds. By betting $75, the maximum acceptable amount, you can celebrate the holiday season with a festive jackpot of $12,500.

Flowers, a popular video pokie where NetEnt put into action its Double Symbols feature, made a return to the online casino realm by way of a Christmas edition. The new pokie involves the same flower theme and has the same game features, but it has a pronounced festive component with appropriate graphics that will help you get into the Christmas spirit. If you have played Flowers, you will not find anything new in the reviewed sequel – just a refreshed visual design with a wintry twist. But if you have not played Flowers, read the following review to find out more about this enticing pokie.

Flowers: Christmas Edition has 5 reels and 30 paylines. The symbols include funny flowers and J to A playing cards designed as ornately decorated gingerbread cookies. Wagering amounts in the pokie are flexible enough to suit most categories of players because the minimum bet is $0.30 and the maximum bet is $75 per spin. The top three awards that regular symbols produce are $5000 (ten roses), $4500 (ten sunflowers) and $4000 (ten Venus flytraps).

A snowflake wearing a plush Santa hat is a wild. It performs its usual function of substituting for regular pictures. A wild only replaces for single symbols. Besides, wilds are also able to form combinations by themselves. Three wilds pay x250, four wilds award x1000 and getting five wilds along a payline provides a win that is x5000 times as high as the line bet, or $12,500 if playing at the maximum 75-dollar stake.

Clouds scattered on the screen are free spin triggers if at least four of them land in any position. Scatters can be single and double, so two double clouds will suffice to get access to bonus spins. You can win 10 to 30 free games depending on the number of triggering scatters in the base game. Furthermore, all wins during the feature are multiplied by x3, which can increase your bankroll dramatically. Wild symbols that are always single in the base game become stacked in free spins. They appear on the reels for a chance of excellent wins.

This is a Christmas-themed video pokie with 5 reels, 30 paylines and a couple of fascinating features such as double symbols and stacked wilds. You can win up to 30 free spins at a multiplier of x3. The game is optimized for both desktop and mobile platforms.