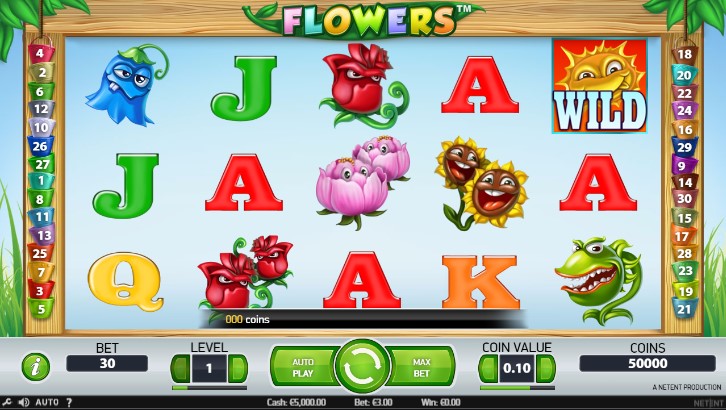 This is a NetEnt’s creation with 5 reels, 30 paylines and a unique double symbol concept. Crisp graphics and funny symbols will certainly make your day because you have never seen such cheerful flowers. The pokie has a free spins bonus and sunny wild symbols, but most importantly, you will get a unique experience of playing double symbols that go beyond traditional five-of-a-kind combinations and create 10-of-a-kinds. The pokie has bright, colorful hi-res graphics and creatively drawn flowers that seem to have leapt off an animated cartoon. All the flowers have a unique character and even anthropomorphic details, eyes, teeth, and so on. For example, a Venus flytrap resembles an aggressive guy giving a defiant look, or a group of rollicking sunflowers grin broadly and enjoy life.

Symbols in a common five-reel pokie occupy one position on a 5×3 grid, meaning there are 15 symbols visible on the screen simultaneously. Sure, there are exceptions when an expanding symbol covers a whole reel or a Colossal symbol occupies a 3×3 area. But Double Symbols is a unique solution that allows for two identical symbols taking up one position. Double symbols count and behave as two separate symbols, so having five double symbols on a payline is the same as having ten single symbols.

A Sun is a wild symbol that serves as a replacement for single flowers and playing card icons. The wild is a very profitable picture by itself because it has the power to create its own combos. Aligning three, four or five Suns on a payline from left to right awards up to $12,500 if playing at the maximum wager.

A smiling curly cloud that pops up on the screen is a feature symbol. No need to catch it on any payline because it counts in any position. Clouds can be single and double and they work with the same logic as regular symbols. When you see four or more clouds on the reels, you receive 10, 15, 20, 25 or 30 free games. Even better, during free spins you will win three times more in payouts. Besides, you will be credited an instant payout of x2 to x10 times the total bet before free spins begin.

There is one more feature to discuss. The wild is a normal single symbol in the base game. In free spins, it has an extra ability that makes it a truly useful symbol and increases your winning chances. When free spins activate, the wild becomes stacked and covers one, two or even three places on top of each other, which can lead to large wins.

Devoted to flowers, the pokie has 5 reels, 30 paylines and unique double symbols that fit inside one reel position but count as two symbols. The pokie features Stacked Wilds, free spins (10–30) and a scatter. The maximum jackpot prize in the pokie is $12,500.