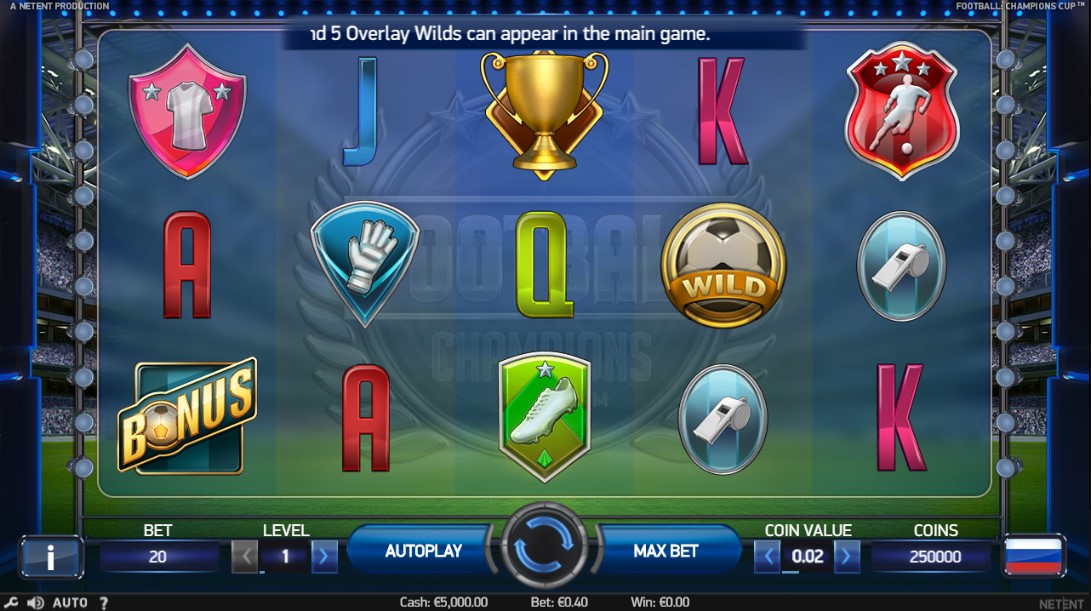 In the run-up to the 2016 UEFA European Championship, NetEnt wanted to give pleasure to all football fans and released the reviewed game that conveys perfectly the authentic look and feel of a big stadium crowded with whistling and chanting fans who are screaming their lungs out in support of their favorite teams. Thanks to excellent 3D graphics and realistic sounds, the pokie takes you to the stadium bowl, right into the football action, where you will enjoy a plethora of innovative game features like Free Spin Tournaments and Save the Goal bonus game, coupled with the $10,000 jackpot. The pokie will be a real treat for both football fans and those who are not interested in it but like the enticing gameplay.

The game has a standard 5×3 layout with left-to-right payouts. It is equipped with 20 fixed paylines and has two betting options for you to change. As usual, there are coin denominations that range between a penny and $0.5 in this pokie. Secondly, you have the Level selection arrows that adjust the number of coins per line, between 1 and 10. So the minimum and maximum bets are $0.20 and $100, accordingly.

Regular symbols are depicted by playing cards from A down to 10 as well as a whistle, goalkeeper’s glove, boots, shirt and a football player’s silhouette. All themed symbols are designed as if they were football club logos, and pay x20 to x1000 for three, four or five of a kind. Given the maximum bet size, the top regular prize in the pokie is $5000 for five silhouetted football players.

A wild yellow ball is a normal substitute. If the wild lands in a proper place, it extends a combination of regular symbols to four or five of a kind, or helps two identical symbols create a three-of-a-kind combo. Besides, wilds are high-win symbols that award the maximum of x2000 for five of a kind. Wagering $100, you can scoop $10,000 for that combination.

Sometimes 2 to 5 balls are thrown onto the screen when the reels are spinning. These balls are overlay wilds. They randomly stop in any positions and then you receive a relevant payout if these overlay wilds have contributed to winning combinations.

Free spins are inspired by the knockout stage of the tournament where only 16 teams remain and they compete for the top spot in the final. After the Round of 16, the eight remaining teams advance to the quarterfinal. Then four teams will meet in the semifinal and then the two finalists will play in the first place match.

The same concept applies to free spins in the pokie. The feature is unlocked on hitting three Trophy scatters on reels 2, 3 and 4. You get 6 initial free spins during which two extra Scoring Wilds appear. A Blue Wild scores the goal for the player, and a Red Wild triggers a goal for the opponent. If the amount of blue wilds collected in the initial free spins exceeds the amount of red wilds, you advance to the second round, Quarterfinal, and play six free spins again. You advance to Semifinal and Final free spins in a similar way, unless you lose on any stage. That said, the pokie awards you with 6, 12, 18 or 24 free spins. If you advance to the final stage and win it, the first place awards you a x500 times the total bet (up to $50,000). Runners-up earn x100 ($10,000), and play-off winners get x20 (up to $2000). These bonus prizes come in addition to all payline wins from free spins.

Three or more Bonus symbols activate an impressive Penalty Shootout bonus game that is comprised of five rounds, each consisting of two parts. First off, you take a penalty shot. Before doing this, you must select a goal corner where to kick the ball. If you score, a coin win is awarded. Then you swap with the goalkeeper and should try and save the opponent’s shot. The minimum and maximum payouts in the bonus feature are 20 and 98 000 coins, accordingly.

Summary
Football: Champions Cup is a feature-packed game with an unbelievably realistic mini game where you take turns in making penalty kicks and guarding the goals. You can win 6 to 24 free spins that are inspired by the knockout phase of international football tournaments. The max prize in the pokie reaches an astonishing $50,000.