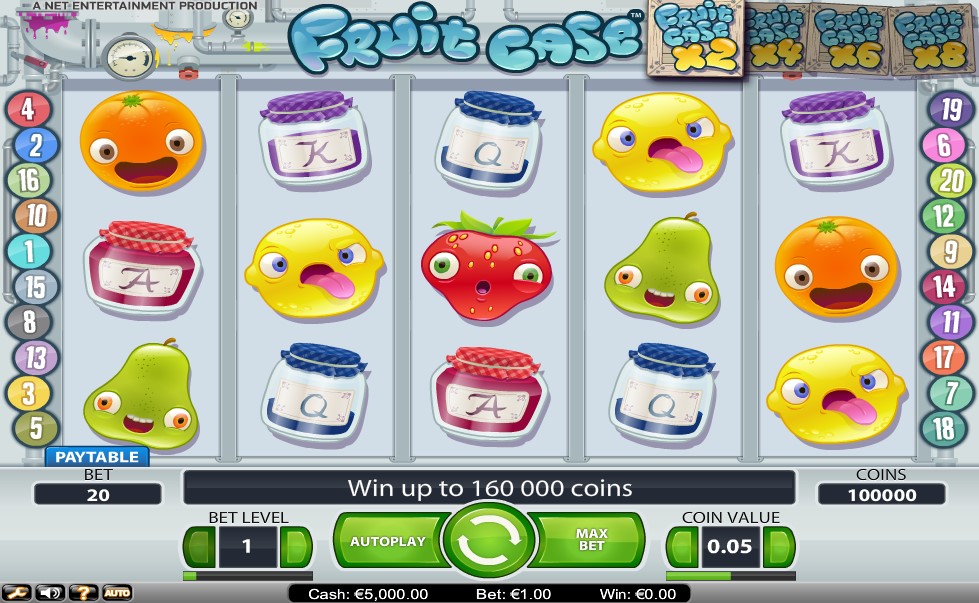 This refreshing and tasty video pokie shows you the fruit factory where jams, juices and other fruit treats are manufactured. Fruits are not happy they are going to be squashed – they make wry faces, stick their tongues at you and are reluctant to be viewed as raw material for juice. The pokie is equipped with the NetEnt’s branded Avalanche feature as well as wild multipliers that keep growing up to x8, producing massive wins.

The action of the pokie takes place at a factory where you get to see gauges, valves and pipes where different juices are flowing. For whatever reasons, designers from Net Entertainment hang on to standard signs that stand for playing card values, but this time the boring kings and aces were given a thematic touch. The low-ranking symbols are made as semi-empty jars labeled as A, K or Q, and each type contains different jam. An “A” jar has a strawberry jam inside, a “K” jar is packed with a blueberry jam and a “Q” jar has a plum jam inside. These low-paying pictures award x5 to x50 for five of a kind.

High symbols are represented by four different fruit that are fun and shaking with fear over what happens to them in the Avalanche feature. A pear awards up to $500, a lemon pays out $2500, an orange gives you $5000 and an astonished strawberry gives away $10,000, all for five of a kind.

Bet sizes are affordable for casual players and are reasonable for high-rollers. The minimum stake is $0.20, with one cent per each active line. Tweaking coin values and the number of coins per line, you can increase your stake up to $100 per round.

Unlike most pokies by NetEnt and other developers, Fruit Case does not imitate reels that begin spinning when the player pushes a related button. Instead, the symbols, arranged in a 5×3 grid, fall to the outside of the bottom edge of the screen, and a new set of 15 symbols fall down from above the upper edge of the game field. This special manner of changing symbol sets from the currently visible to a new one causes the appearance of new terms, for example, the feature known traditionally as “free spins” is called here “free falls”. The symbols are said to fall, not spin, and so on.

Any win triggers the Avalanche feature that works as follows: A fruit crushing device appears around each of the involved symbols and mashes them into juice. Unaffected symbols located above the mashed symbols fall down to fill in the vacant spaces, and then new symbols fall from above the screen. After the initial avalanche, there is always the chance that the newly emerged symbols create winning combinations. Should it happen, the involved symbols disappear again and you are awarded the second avalanche. The process repeats itself and you keep on winning until there are no more wins.

The pokie has a wild symbol, a wooden box with the Fruit Case lettering on it. Besides, each Wild box displays one of four wild multipliers: x2, x4, x6 or x8. The multiplier counter, shown above the reels, starts at x2. The related multiplier displayed on the box applies if a winning payline has a wild box where the wild substitutes. After the first avalanche, the multiplier increases to x4, on the third avalanche it becomes x6 and on the fourth and all subsequent avalanches, the multiplier has the value of x8.

A blender with the Free Fall lettering awards free falls if three blenders appear on a bet line from left to right like any other regular symbol. During free falls, all wins are multiplied by x3, in addition to wild multipliers that are also active on each avalanche. So you get the chance to have a winning multiplied by x24 after the fourth avalanche! Note that wild symbols substitute for ALL symbols, so it is not that hard to trigger free falls in Fruit Case.

Fruit Case is a 5-reel pokie with an avalanche design, free falls and wild multipliers of x2 to x8. The maximum cash prize up for grabs amounts to $10,000.