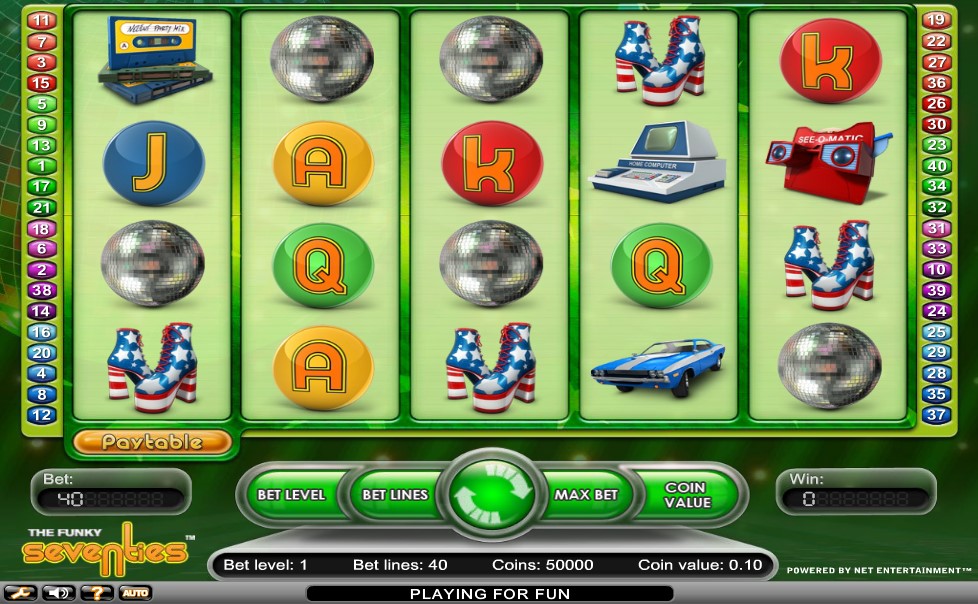 Funky Seventies is part of NetEnt’s collection that features three pokies, each devoted to a certain decade of the 20th century. The pokie takes you back in time to the era of Rolling Stones and Bob Dylan, to the golden age of arcade video games, bell-bottomed pants and high-heeled platform shoes. Playing this retro-themed pokie, you will enjoy stacked wilds and free spins with all wins doubled. The pokie has an unusual format, 5×4, and 40 paylines that you can deactivate if needed. Welcome to the vibrant disco party and get ready to feel some nostalgia as you listen the fascinating, funky music of the 1970s.

Apart from standard J, Q, K and A, symbols are represented by the things that were iconic or trendy in the Seventies. These include an audio cassette tape (which pays up to $375 for five), a pair of Star Spangle Banner platform shoes that were popular with disco-goers ($375 for five of a kind), See-O-Matic glasses worn in the cinema ($525), a glistening disco ball ($525), a Commodore PET personal computer, which was first released in 1977 ($1000), a blue muscle car with a white “go-faster stripe” on the hood ($1000). Combinations win when three or more matching icons land left to right on a payline.

On the face of it, the payouts appear far from being good but the fact is that Funky Seventies is a low-volatile pokie, meaning the winnings take place very often but they tend to be small. Besides, the game has many paylines (40), which ups the chances of hitting a whatever winning combo.

Net Entertainment provides great flexibility in bet options. First, you can change the number of bet lines if for some reason you prefer playing, say, 35 lines instead of 40. Coins are available in various sizes up to $0.50, and you can play with a bet level up to 5. Therefore, the minimum and maximum stakes in the pokie are $0.40 and $100 per round.

The pokie logotype that reads “70’s Wild” is a wild substitution symbol that is very helpful when one or more pictures are missing to complete a payline combination. Wild symbols are configured to spin in small groups of four. This means they can land in a partial stack with two or three wilds on the reel, or in a full stack occupying the entire reel.

A disco dancer girl with the word “Scatter” beneath the symbol triggers a free spin feature. There’s no need for scatters to fall onto a specific bet line because they count in any position. Just hit three of them, or greater, and you will be awarded 5 free spins during which all wins are doubled. The feature is retriggerable if you hit 3 scatters again while playing free spins. Three scatters pay out up to $200 the instant you hit them anywhere on the screen.

Funky Seventies is a retro-themed pokie that plunges you into the popular culture of the 1970s. The game features stacked wilds, scatters and free spins. The jackpot you can win in the game is very low, at $1000, but the pokie usually pays very frequently.