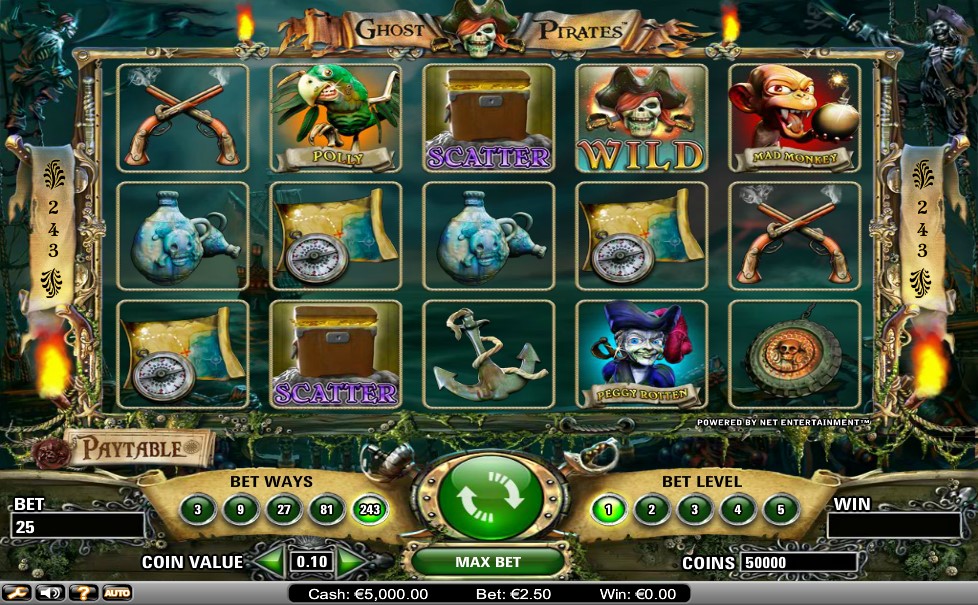 Ghost Pirates is an atmospheric pirate-themed pokie that features impressive graphics, sophisticated animations and a piece-of-art picture on the background. The gamer sees the reels as if standing on board a pirate vessel which wooden masts and bars are covered with weeds and seashells. The pirate symbols resemble much the crew members of the infamous Flying Dutchman from the Pirates of the Caribbean. This is an incredibly picturesque pokie with a wild symbol, free spins and 243 chances to win on each spin.

The pokie has no bet lines with a pre-determined pattern. NetEnt integrated its in-house “243 Bet Ways” model that eschews lines in favor of a more dynamic model where wins are generated by three (in some cases, two) or more matching symbols stopped on adjacent reels, beginning with the leftmost reel. This structure opens the way for hitting multiple combos at the same time. But the developer goes ahead and provides gamers with the option to deactivate reels one by one, starting with reel 5. This decreases the number of possible bet ways to 81 for 4 active reels, 27 for 3 active reels, and so on down to only 3 bet ways.

Note that the central row remains functional every time, regardless of whether you have turned off any of the reels or not. Gamers are encouraged to avoid switching off the active reels because this reduces the pokie’s theoretical return and eliminates nearly all combinations that consist of five matching symbols, except in instances where these combinations run along the central row that is always in operation.

Hitting three (in some cases, two) or more identical symbols pays out differently, depending on the kind of symbol matched. Low-win pictures are represented by an anchor, rum bottles, a skull pendant, a cannon, a treasure map and two smoking guns. These symbols pay out 2 to 200 coins. High-win icons portray the ship crew, each being labeled with a proper name. Polly the parrot awards up to x400, Mad Monkey pays a little more, x500; a cunning One-Eye Ed awards x1000, and captain Peggy Rotten gives away the pokie’s second-largest jackpot worth the line bet times x1500 (up to $3750 at max).

Skull and Crossbones, a widely used symbol of death, is a wild that helps all symbols create combinations. Typically, wild symbols have the power to replace only regular, non-feature symbols but in this game scatters are also substituted by the Skull and Crossbones wild.

A treasure chest is called a scatter in the pokie but in fact 3+ of them must appear in succession, starting at reel 1, to trigger a feature, so it is not a scatter in a loose sense. Anyway, three, four or five of these chests initiate 15, 20 or 25 free spins, accordingly. If the feature is triggered with one or more reels deactivated, you get five free spins less.

Ghost Pirates is a pirate-themed video pokie with 5 reels, 243 ways to win and some fairly basic features such as a wild, scatter and free spins. The jackpot is $3750 (which is x50 times the total bet). Top-notch graphics of the pokie creates full immersion into the dark ambiance of the pirate ship.