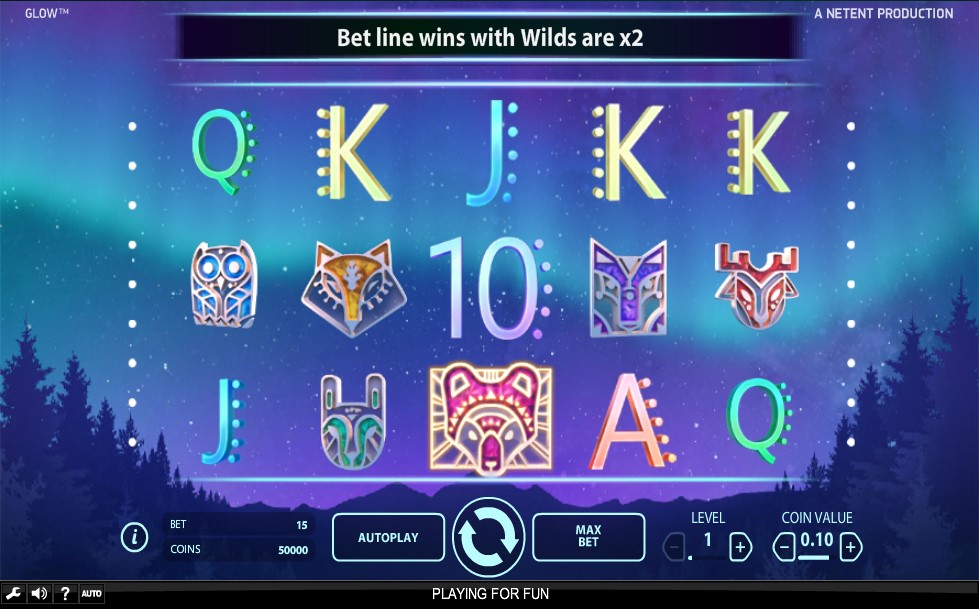 Glow is a 5-reel pokie themed around auroras and indigenous peoples of polar regions, and this seemingly incompatible thematic mixture is unique in the pokie making industry. Free spins are the key pillar of the game because they are won very often, virtually on every spin – the same free spin model is implemented in Fruit Shop, another game from Net Entertainment. If luck is on your side, you can win up to 94600 coins in this remarkable pokie.

Imagine standing on a sloped hillside in the woods in the Northern region of Canada or in Alaska. It’s night and there is no man around. All you can see are trees and starry skies with auroras of different forms and colors. Gamers who live in southern parts of Australia can also observe this natural light display and it tends to be of red color in that country. Aboriginal Australians often associated the southern lights with fire and believed that their ancestors and spirits tried to send messages through auroras.

The reviewed game has a blue and purple background with 15 symbols visible at the same time. As noted earlier, the pokie vendor added a folklore touch by using a set of symbols that include animal faces drawn in simple lines with typical Indian patterns and style and each symbol has predominant colors for easier differentiation. These symbols are a hare with green accents (up to $2000), an owl with inserts of a blue color ($5000), a fox ($7500), a wolf ($10000) and a deer ($20000). The bracketed figures show the maximum win for five of the same related symbols. Card values from A down to 10 are also met in the game as low-win symbols that pay up to $1500.

The pokie features 15 paylines and a bet per line ranges between $0.01 and $10, thus the total bet is $0.15 at its lowest and $150 at its highest. Glow falls into the category of low-volatility pokies. They normally pay small winnings, allowing you to extend the bankroll for longer.

A bear totem head is a wild substitution that contributes to payline wins of other symbols. Moreover, it doubles payouts when substituting.

Free spins take place often in the pokie because they are not triggered by scatters. Instead, the feature is unlocked by matching animal symbols.

During free spins, any combination of animal or playing card symbols adds extra free spins to the remaining number of free spins:

As is evident from the foregoing, a free spin session lasts for as long as new qualifying combinations emerge on the screen.

Glow is a five-reel pokie with a dynamic free spin action and wild multiplier symbol that doubles your wins. Coupled with noteworthy graphics, the pokie will appeal to fans who like animal and folklore themes. The maximum potential prize reaches a stunning 94600 coins in free spins.