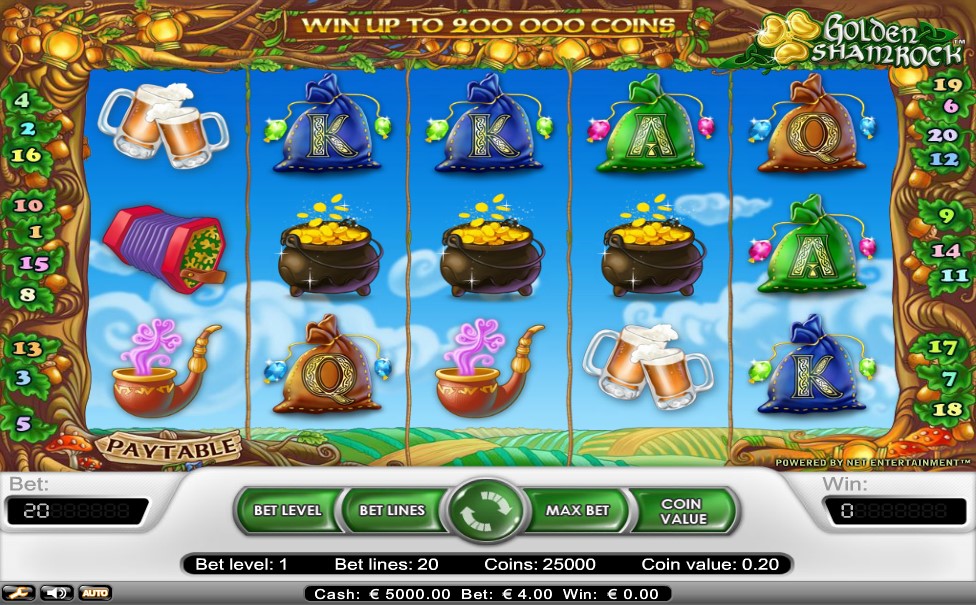 This 5-reel 20-payline pokie is devoted to the Irish culture and its main official symbol, a three-leaved shamrock. This lively and beautiful pokie has lots of symbols that are commonly associated with Ireland and its fairy tales. Nice, kind and amicable, this pokie has an obvious advantage over a vast number of pokies with somewhat aggressive themes. Here, you are going to plunge into the magic world of Irish folk culture and find golden shamrock that will bring you much luck and prosperity. Features include an expanding wild and free spins with a multiplier of 1–5.

The reels are placed against a rural scenery and are framed with oak trunks, leafs and acorns. Bet options are affordable for low-limit gamers as the minimum bet is $0.20. Coins are available in six denominations between one cent and fifty cents. The number of coins per line is also adjusted between 1 and 10, so the total bet can reach $100 at its highest.

Low-win symbols in the pokie are three bags of brown, blue and green colors with letters Q, K and A printed on each; a concertina, a traditional musical instrument used in Irish music (x100), two beer glasses (x125) and a smoking pipe releasing pink smoke (x150). All of these symbols pay out when at least three of them hit an active line. High-ranking symbols are more lucrative and they award some cash if two of them land. Five green top hats worn by a leprechaun award x1000, a harp pays off x1500, a golden horseshoe gives away x2000 and a massive cauldron full of gold coins pays out x4000 for five of a kind. The maximum line bet is $5, therefore the top prize that you can scoop in the game reaches a huge $20,000 for five cauldrons, provided you play at the top stake.

A little leprechaun wearing a green top hat and smoking a pipe is a wild substitution symbol. it does not appear on the first and fifth reels, yet it has an unmatched capability that makes it a very profitable symbol. Whenever the leprechaun emerges on a reel, it expands and completely fills the whole reel. With the expanding wilds, which show up very often, you get more winning opportunities, fun and excitement.

Three or more golden shamrocks scattered across the reels activate a free spin pre-selection feature. When the scatters appear, you are prompted to pick one of them to display both the number of free spins and a multiplier applied during the feature. The number of free spins depends on the amount of triggering scatters, and the multiplier ranges between x1 and x5. If the gamer lands 2 scatters again during the bonus rounds, some extra free spins will be added to the free spin counter.

Golden Shamrock is a 5-reel 20-payline video pokie with an Irish theme. The game features an expanding wild on reels 2, 3 and 4, free spins and a x1–x5 multiplier in free spins.