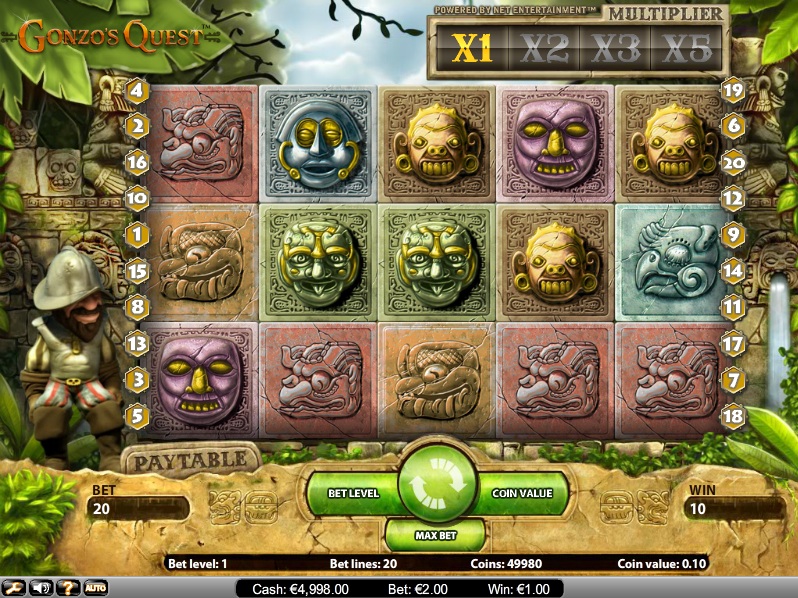 Designed for desktop and mobile devices, the pokie is one of the most recognizable games in the history of online gambling. Since its release in 2010, it received tons of favorable reviews from vaunted game magazines and online resources. The pokie has tremendous sway with common gamers who consider Gonzo’s Quest has a well-balanced gameplay, excellent sound effects that sync up with the action on the reels, and indulging animations. For over 7 years, the game that was created with so much love has been leading the way in terms of popularity. Try this legendary pokie and join a horde of admirers of this wonderful creation from NetEnt.

The intro video, which you can skip, introduces you the context of the game. In the middle of the 16th century, a ship carrying a group of Spanish conquistadores dropped the anchor near the Peruvian shore line. Gonzo, a brave soldier, stole a map to El Dorado under the veil of night and jumped down from the ship into the water to find the lost treasures by himself. A pyramid constructed entirely of gold was already visible when suddenly the road was blocked by big square stones with some tricky drawings on them. The stones were arranged as a dodgy, complicated lock that needed to be opened. The hero had to solve that brainteaser to clear the way and reach the coveted treasures.

Gonzo’s Quest was the first pokie to employ the Avalanche feature that is now used across many pokie from Net Entertainment. The five columns of symbols that are normally called “reels” do not spin. Instead, they fall from above, filling in the 3×5 field. After pressing Spin (a green round button at the center of the button panel) they fall down to the outside of the bottom edge of the game field. If a game round results in a winning combination, its symbols explode and are removed from the field, and the empty spaces are then occupied by new symbols, which creates opportunities for new combinations. This is known as an avalanche.

On top of the reels, there is a multiplier meter that shows x1 at the beginning of each paid round. With each subsequent avalanche in a game round, the win multiplier grows to x2, x3 and x5. If hitting the highest paying combo, which awards $6125 (Grey Idol), after the fourth avalanche where you have a multiplier of x5, the total money prize for that combo will be $6125 x 5 = $30,625. An advanced multiplier resets back to x1 when the winning streak of avalanches terminates.

The wild symbol is a stone block with a question mark on it. In Gonzo’s Quest the wild appears only on reels 2, 3 and 4 and substitutes for all symbols, including scatters.

A golden stone face putting his tongue out is a scatter symbol that lands on reels 1, 2 and 3. In fact, this is not a scatter because it must land on a payline from left to right, like any other regular symbol, to trigger free spins. But the golden idol is called a “scatter” in the game rules, and so will this review. Well then, three scatters activate 10 free falls in which the pokie utilizes the enhanced multiplier trail of x3, x6, x9 and x15. So every win in the free fall pays out at least 3 times as much as that in the base game. Consequently, the highest loot in free spins reaches an enormous $91,875 for one single combination!

Whether a pro or novice, you must spin the reels of this iconic pokie that is a staple of many online casinos. Gonzo’s Quest has 5 reels, 20 paylines, an avalanche design and a x1–x5 multiplier in base game and x3–x15 in free falls.